Saying Goodbye to Summer on a High note 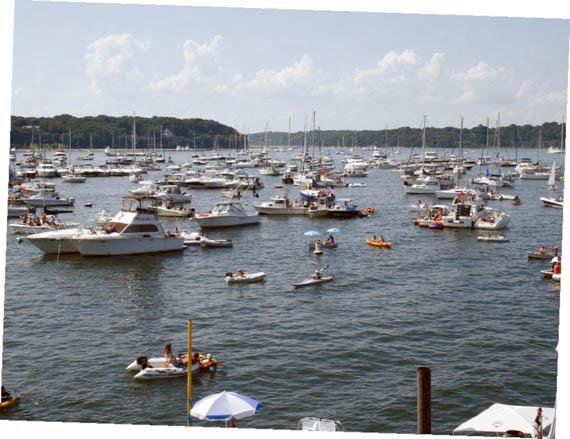 What is a better way to say farewell to the summer than to celebrate at a concert held on top of a working lighthouse? September 5th, 2010 marked the fourth annual Huntington Lighthouse Music Fest. It was celebrated with hundreds who came to join in the musical festivities on their boats, jet-skis, sailboats – you name it. Everyone was welcomed for this free event that took place in the Huntington Harbor from 11am to 6pm on what was a beautiful day that marked the end of summer. This concert was clearly unique due to the location and staging area for the many bands that performed. The concert only accessible only by boat on top of a working on a lighthouse. The Huntington Lighthouse was built between 1910-1912 and rises to an impressive 42 feet. It was on top of the light house were several bands of all different genres such as La Fuerza Positiva, King Wellington, Hometown Heroes, and The Pamela Betti Band (just to name a few) performed for an estimated crowd of over 700 boats. Black Rose Production’s President Tito Batista was also in attendance as a guest of the Honorable Judge Rebolini on his private boat along with Robert Bontempi who is the chairman of the board for the Huntington Township Chamber of Commerce. The event was directed by Pamela Setchell, who is the President of the Huntington Lighthouse Preservation Society. The Huntington Lighthouse Music Fest was a fundraiser for the Huntington Lighthouse Preservation Society which fights to help the restoration and help keep the base of the lighthouse and it’s landing from eroding away due to the high tide. This year they raised about $9,000 for the Preservation Society. The money was raised by raffle sales, donations and t-shirt sales from the concert goers. Donations were collected by a band of pirates from Ye Pyrate Brotherhood which navigated from boat to boat as they made their collections. The Ye Pyrate Brotherhood is a Sayville based group of men and women who reenact historical events from as far back as the 17th century and help young children with social and medical challenges by means of participating in various charities that are dedicated to those causes. The Ye Pyrate Brotherhood volunteered their time to help the Preservation Society raise money to help preserve and restore the lighthouse. While the word was spread about the need to help preserve the lighthouse, and money was graciously being donated, the concert goers closely surrounding each other became one large family. People that gathered from all over the surrounding areas enjoyed and partied as one whole community, pulling together to save a piece of Long Island’s History.Black Rose Productions Inc is a multi-facated company that is in the business of artist management, web design, and film and video production.Black Rose Productions Inc. 409 RT 112 Port Jefferson Station, NY 11776

10-28-2010 | Arts & Culture
Black Rose Productions Inc.
Gomez for the People, the People for Gomez
The local community members of East Northport joined forces to “rally in the streets”, in support of congressional candidate, John Gomez. On Sunday October 24th, Justin Abrams, Executive director of Black Rose Productions, Inc. visited a rally set up by acting founder and director of the Conservation Society for Action, Mr. Stephen Flanagan. The rally attracted a substantial amount of followers including war veterans, children, and local communitarians. The CSA
10-28-2010 | Arts & Culture
Black Rose Productions Inc.
100th Year Anniversary of the Boy Scouts of America
Saturday, October 16th marked the 100th anniversary of the Boy Scouts of America, Black Rose Productions, Inc. along with Congress Candidate John Gomez were there to help “pitch” the campsite. Its was a crisp and windy day filled with rugged boy scouts and their families, participating in events ranging from civil war demonstrations to seminars, to cart racing and even the opportunity to shoot skeet at the shotgun range. The