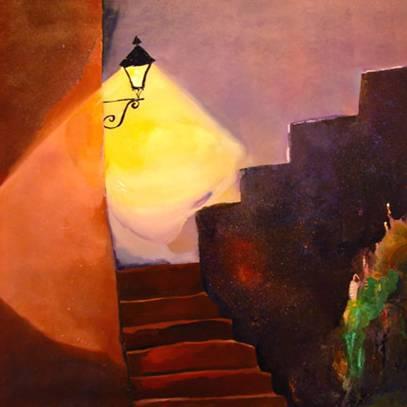 “De aquí y de allá- From Here and From There” Cuban Art ExhibitSt. Petersburg, FL (October 11, 2010)- Galerias Bohemia is exhibiting art work from renowned Cuban-American artist Agustin Gaínza and Cuban artist Sandra Dooley Medina. Cuban art reveals the constant conflict between its country's island beauty and its isolated struggle. From colorful, naive explorations of its cities and countryside to cynical installations offering commentary on consumerism and a restrictive regime, Cuban art reflects the challenges unique to the island nation. Today, collectors are sampling a little of both. The newest generation of Cuban artists use their work to explore arte con la vida (art together with daily life). These artists voice concerns about issues of escape, shortages of material necessities, Cuban bureaucracy, inequality and racism. They express loyalty to their island's natural beauty and socialist ideals, without ignoring the daily hardships in Cuba. Never before has there been as much Cuban art on view in the United States, at the museum level and in retail galleries. "We have had a lot of interest in Cuban works," said Anthony Fisher, co-owner of Indigo Arts Gallery in Philadelphia, which specializes in self-taught art from around the world. "There is a tremendous general cultural interest in Cuban music and dance and the arts. At least part of it is the aspect of being forbidden fruit."Artist BiographyAgustin Gaínza is a Cuban-American artist who for over four decades has devoted himself to the visual arts, in special, painting, drawing, printmaking and ceramics. His work has been exhibited in his native country as well as in the United States, Europe and the Americas being acclaimed by the public and the specialized circle. His work is well represented in private and public collections all around. Gaínza live and works in his adoptive Miami Since 1979.“There are artists who can leap over the culture currently in fashion and grow to gigantic proportions, moved by their memory and by deep awareness of their historical inheritance. For these artists, the act of creating and that of breaking away occur simultaneously and harmoniously-they are part of one same natural and mysterious process. Agustin Gaínza is one of those artists. We see this in the way he peers into a window or paints an evening to reveal the poetic side of reality. His images capture the spirit, light, air, shadows, sensuality and throbbing of the human heart. “Zoé Valdés Novelist & Poet Paris, Spring of 2010Sandra Dooley Medina Artist Statement "The story of how I started painting is very amusing: in the Christmas of 1999 I wanted to make some new decorations because, between you and me, the ones we had in the house were horrible. So I took some hollow egg shells and made them into ornaments which I hand painted with a set of children's temperas, and my friends went crazy for them. I ended up painting more than 40 eggs, then I started to make cards and then some little paintings. After that I was hooked, and I haven't stopped painting since.” The current collection at Galerias Bohemia is titled “Mi Vida” “My Life” reflects Sandra’s daily life at home with her friends, her dogs and cats, in the seaside town of Santa Fe, Cuba. The paintings have bright splashes of color and the women within them are shown as reflective and thoughtful….”###Galerías Bohemia features emerging Cuban Artists. The premier art gallery in St Petersburg concentrating on works of art from artist working and living in Cuba. Bohemia is the leading ,wholesale, retail, supplier of Cuban Art in the South East.Galerias Bohemia 649 Central Avenue St Petersburg FL 33701 www.gbohemia.com Eduardo J.C. Garriga galerias@gbohemia.com 727 388-9200

02-11-2019 | Advertising, Media Consulting, …
MarketResearchReports.com
Cuba widens reach of 3G services
New research on Cuba’s telecom sector (https://www.marketresearchreports.com/paul-budde-communication-pty-ltd/cuba-telecoms-mobile-and-broadband-statistics-and-analyses ) remains a peculiarity, with state control having stymied rather than promoted the development of all sectors. The country has the lowest mobile phone and internet penetration rates in the region, while fixed-line teledensity is also very low. Fixed-line and mobile services remain a monopoly of the government-controlled Empresa de Telecomunicaciones de Cuba (ETESCA Cubacel). Although there are strict state restrictions over the right
06-29-2017 | Fashion, Lifestyle, Trends
MarketResearchReports.biz
Cigarettes in Cuba, 2017 Published By MarketResearchReports.biz
MarketResearchReports.Biz presents this most up-to-date research on "Cigarettes in Cuba, 2017" Description "Cigarettes in Cuba, 2017" is an analytical report by GlobalData that provides extensive and highly detailed current and future market trends in Cuba. Cuba is the largest island in the Caribbean and one of the larger markets for cigarettes in the region. Since the early 1990s, cigarette sales have been affected by a combination of local production problems, the erratic performance
03-23-2017 | Tourism, Cars, Traffic
Explorations Inc
Explorations announces 2018 Cuba Cruises
The adventure tour company, Explorations has announced the 2018 schedules and rates for three yacht cruise programs in Cuba. They are all People-to-People Cuba programs open to United States citizens. The itineraries explore the western part of the island nation, which is famous for its culture, music, warm people, and art with day tours while sailing from Havana to Cienfuegos. Each day passengers will discover a new port of call,
01-03-2017 | Advertising, Media Consulting, …
PromoQuip Inc
Plinko Board Shipped to Cuba Highlights International Opportunities
PromoQuip Plinko Board ordered to celebrate Jet Blue’s direct flights to Cuba; Michigan manufacturer’s multi-language website key to continued expansion in global marketplace Cedar Springs, MI; January 3, 2017 – PromoQuip, a leading designer and manufacturer of custom promotional equipment recently shipped their first order to Cuba. The custom Plinko Board was ordered by Jet Blue, to celebrate being among a small group of air carriers authorized to provide direct
02-20-2013 | Sports
Baseball Geek Group: Jimm Hendren
Baseball Geek Group: Jimm Hendren│Baseball in Cuba
Baseball was first introduced to Cuba in 1860s by students who returned from the US and also from Western sailors docked in the nation. It quickly became popular and was spread widely. In 1878, the Cuban League was established composed of 3 teams — Mantanzas, Habana, and Almendares — each playing 4 games. At first, players were all whites and amateurs but professionalism soon emerged as rivalry among teams strengthen. The Cuban
09-06-2011 | Fashion, Lifestyle, Trends
Pegasus Spiele
Pegasus Spiele publishes „Santiago de Cuba“
Friedberg/Hamburg, September 5th 2011 – „Santiago de Cuba“, the new board game from eggertpiele will be published by Pegasus Spiele in time for SPIEL 2011 in Essen. Starting September 1st , all distribution and communication duties are being handled by Pegasus Spiele, which takes over from their business partners at AMIGO Spiel + Freizeit GmbH. At this October's SPIEL eggertspiele will be presenting „Santiago de Cuba“ at their booth. „We are
Comments about openPR
I can't but agree to the positive statements about your portal: easy to use, clear layout, very good search function, and quick editing!
Jens O'Brien, Borgmeier Media Communication