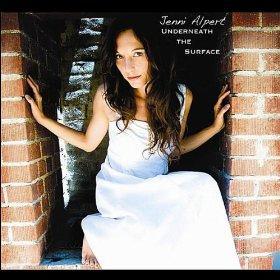 Jenni Alpert - Underneath The Surface

October 6, 2010 – Los Angeles, CA – Jenni Alpert is set to independently release her new LP titled “Underneath The Surface” on October 12, 2010 through online retailers. The Pop artist has spent the last few months recording the effort with producer Brad Smith (Blind Melon) in the Los Angeles area with a diverse and seasoned group of studio musicians. This marks the 5th release from this internationally touring artist and she is currently on the East Coast on tour supporting this latest LP. Her CD release show is confirmed for October 16th at the tastemaker Hollywood venue The Hotel Café. Tickets are still available at the venue and online.Jenni is currently featured on Clear Channel’s NEW! Discover & Uncover website and will be streaming her entire LP all next week on tastemaker music website AOL Music."Working on this new eclectic pop album with Brad Smith was an incredibly enriching and gratifying experience. The two other key players in bringing 'Underneath the Surface' to life, Eric Boulanger (engineer) and Jimmy Paxson (drums, stevie nicks) helped support and develop every aspect of this creative endeavor and I am thoroughly excited that the music has a life of its own with a medium of accessibility for people who appreciate this type of music". – Jenni AlpertJenni Alpert – “Underneath The Surface” – Tracklisting1 – Heaven 2 – I’ll Be Gone 3 – Sweet Talk 4 – You Will Come Back 5 – Stupid 6 – Underneath 7 – Love Is Enough 8 – Now You Know 9 – Face The BeastLatest Tour Dates10.05.2010 – Nashville, TN – The Basement 10.08.2010 – Knoxville, GA – Blue Plate Special Radio (interview) 10.11.2010 – Knoxville, GA – Relix Variety Theater 10.13.2010 – New York, NY – Rockwood Music Hall 10.16.2010 – Hollywood, CA – The Hotel CafeJenni Alpert on Myspace – Myspace.com/JenniAlpert Jenni Alpert Website – JenniAlpert.comPress Contacts:Bob Bradley Independent Publicist (714) 321-1471 Bob@BobBradley.info 3429 Bellevue Ave Apt 302 Los Angeles, CA 90026-3566About Jenni Alpert:“Little ol me, pop singer-songwriter Jenni Alpert from Los Angeles can't believe that in the last year I have been working in the studio with Brad Smith on a new record (that is streaming right now as you read), have just toured in Europe supporting Jon Allen from the UK in incredible places, been on national and international radio for crazy amounts of listeners for the first time ever, have had my music on TV shows like Castle, Lipstick Jungle, The Real World, CSI Miami, and am about to embark upon a series of new and exciting unexpected musical adventures.” “Since graduating UCLA, you may of read that I have independently toured the US and internationally in over 14 countries with regularity in the UK (England, Ireland, Scotland), France, The Netherlands, Italy, and Australia starting off as a singing backpacker... and yes in the not so distant past I was that girl who supported Loudon Wainwright III, Jon Allen, Kaki King, and shared a stage or two with Regina Spektor and my college friend Sara Bareilles among other familiar voices you know and love..... and sure my music is available on iTunes and Amazon for you to have for your very own so please do enjoy my music.”Bob Bradley is a music and entertainment industry publicist from Los Angeles, CA. He has been involved in over 50 record releases over the past 4 years and has also worked with celebrities, law firms and special events that require quality PR services. His specialty is online press and strategic marketing with online blogs, zines, and tastemaker new media sources.Bob Bradley Independent Publicist (714) 321-1471 Bob@BobBradley.info 3429 Bellevue Ave Apt 302 Los Angeles, CA 90026-3566

You can edit or delete your press release Jenni Alpert Sets Release Of New LP For October 12, 2010 here

10-18-2013 | Arts & Culture
Bob Bradley Publicity
Rising Austin, TX Artist The Vantage Announce New EP Release Date
Oct 18, 2013 – Austin, TX – Buzzing Pop/Indie group The Vantage have announced a November 26 release date for their new EP “This Time Now”. This Texas based duo recorded the effort with acclaimed producer Rob Freeman (Hit The Lights, Armor For Sleep) and includes their debut single "On My Way". The track has already garnered massive attention online with over 200,000 plays on SoundCloud and a #2 spot
01-14-2012 | Arts & Culture
Bob Bradley Publicity
Melora Hardin To Perform This Weekend In Southern California
Los Angeles, CA – January 14, 2012 - Critically acclaimed singer and actress Melora Hardin (The Office / Monk) will be performing live at Whittier College in Whittier, CA this Saturday, Jan 14th. This show and many of her upcoming appearances will be in support of her new CD All The Way To Mars, which will be available through online retailers January 24th. Her performance will be comprised of her original
08-24-2011 | Leisure, Entertainment, Miscel …
Bob Bradley Publicity
St. Andrew Announces New EP No Man’s Land For A September 27, 2011 Release.
Aug 24, 2011 – Los Angeles, CA – Pop/Rock artist St. Andrew recently finished up work on his new EP entitled No Man’s Land with producer Jesse Berent and mixer Brian Paturalski (Britney Spears, Outkast). A digital release date for the EP has been set for September 27, 2011. This 5 song concept EP touches on St. Andrew’s thoughts of religion, sexuality, war and the party culture in modern day
03-17-2011 | Leisure, Entertainment, Miscel …
Bob Bradley Publicity
New Digital Record Label & Music Publisher Gas Can Music Announces Formation And …
Gas Can Music, a newly formed digital record label and music publisher from Southern California has announced its formation and the signing of its first 3 artists. Gas Can recently inked an exclusive distribution deal with INgrooves, which provides sales, marketing and mobile services to over 200 major and indie retail partners worldwide. Gas Can will be releasing new music from a diverse range of rock, alternative and metal artists while

10-07-2020 | Business, Economy, Finances, B …
Dakota Tin
Popular Metal Landscape Edging Now Available To Retailers
After almost 2 years of successfully selling their popular metal landscape edging online, Dakota Tin is now offering this product line as a wholesale option to retailers. “Selling thousands of rolls of our landscape edging over the last 1 ½ years has allowed us to improve on the product based on customer feedback,” says Dakota Tin founder Ryan Rusher. “Additionally, we’ve expanded our capabilities to handle large volumes of distribution of
06-08-2016 | Industry, Real Estate & Constr …
EUMEPS
EUMEPS Announcement of New Chairman and Vice-Chairman of the Board
During the General Assembly of EUMEPS in Windsor (UK) on May 24th 2016, Mr. Francesco Beduini (Board member LAPE HD srl / Italy), was elected as Chairman of the EUMEPS Board. Mr. Beduini is succeeding Mr. Allard Lohman, at the expiry of his statutory term of office. Mr. Bernhard Hauck (Managing Director Schaumaplast GmbH & Co. KG/ Germany) was elected Vice Chairman of the EUMEPS Board. Maaseik, Belgium, June
02-29-2016 | Arts & Culture
Danielle Hampson
Book Marketing Announcements: The Authors Show Lineup For The Week Of February 2 …
Don McCauley of the Free Publicity Focus Group and Danielle Hampson, Executive Producer of The Authors Show, founders of The Authors Marketing Powerhouse, have announced The Authors Show radio and broadcast schedule for the week of February 29, 2016. The new show schedule is available at the Authors Marketing Powerhouse site. For those who hope to sell books on the Internet, the challenge can be daunting. It can be confusing difficult,
08-26-2013 | Industry, Real Estate & Constr …
DEAG Deutsche Entertainment AG
DEAG strengthens market position in Switzerland
• Cooperation agreement entered into with ABC Productions AG • Business expansion mainly for Rock/Pop, Family Entertainment and Corporate Events • Executive Board expects more than doubling of results versus prior year for 2013 Berlin, June 03, 2013 - DEAG Deutsche Entertainment AG (ISIN DE000A0Z23G6) strengthens its market position in Switzerland through a cooperation agreement between the Good News Group and ABC Productions AG. This cooperation agreement regulates the joint approach of the two partners at
02-24-2011 | Business, Economy, Finances, B …
JC Virtual Assistance
JC Virtual Assistance Opens for Business
FOR IMMEDIATE RELEASE JC VIRTUAL ASSISTANCE OPENS FOR BUSINESS Kelowna, B.C. February 2011. In today’s economy more and more businesses are trying to downsize and reduce overhead costs by seeking other ways to grow with few or no employees. But these businesses still need assistance in order for their business to run smoothly. So what’s the answer? Outsource to a virtual assistant. A virtual assistant, also known as a VA, is an
05-14-2009 | IT, New Media & Software
Capricode
DataInfo replaces Nokia Intellisync with Capricode’s SyncShield® mobile devic …
Helsinki, Finland –Capricode and Finnish IT solutions and services provider DataInfo have made an agreement regarding offering Capricode’s SyncShield® mobile device management solution to DataInfo’s customers. Capricode’s SyncShield® enables centralised, over-the-air management of smart phones and PDAs. Customers can purchase SyncShield® from DataInfo either as a hosted solution (ASP) or as an in-house solution. With SyncShield® enterprises can lower the costs arising from their smartphone and mobile application (such as mobile
Comments about openPR
I can't but agree to the positive statements about your portal: easy to use, clear layout, very good search function, and quick editing!
Jens O'Brien, Borgmeier Media Communication