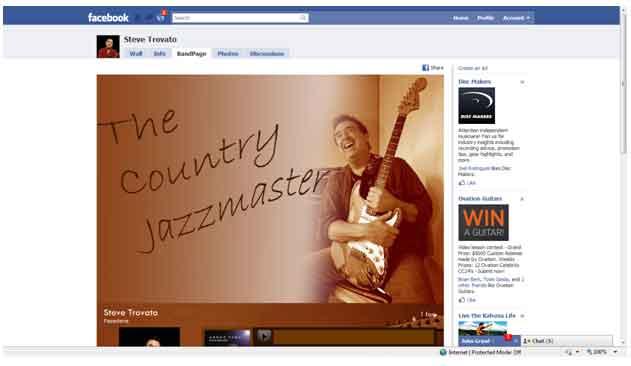 Pasadena, Ca – Guitarist, Steve Trovato has teamed up with Joshua Paul Vittek and Associates to create the Steve Trovato Facebook Fan Page. The new page will offer more features than the typical Facebook layout. The welcome page features custom graphics, an audio player, a new photo library, a new video viewer and the ability to play and purchase music directly on the Facebook site. Over the next few months, they will also integrate a store allowing fans to purchase the back catalog of all Steve’s recordings and instructional material in print and DVD. The goal of the page is to open a line of communication between Steve and his fans promoting future performances, releases and materials.As to why Steve chose to have Joshua Paul Vittek and Associates work on his account, Steve replied: “I chose Joshua Paul Vittek and Associates because of their proven track record. Josh works with some of the highest visible artists in the world. He is well versed in all contemporary, state of the art, internet marketing avenues and is able to put it all together into a solid, effective marketing strategy.Steve Trovato is a highly acclaimed guitarist based out of Los Angeles with countless studio sessions and films scores to his name. In 2001, his first release, About Time… received numerous accolades and quickly brought him acknowledgements from both the listening audience and his peer musicians. Steve has been referred to as the “greatest Tele player around” – which is no small feat. The follow up release, aptly named Country Jazzmaster came out in 2007 and set the bar even higher by demonstrating his expansive versatility in jazz, country and blues. Steve is now focused on utilizing the power of the internet to bring his music to a bigger audience by using the new tools available through social media.“We are very excited to work on Steve’s account. I, along with many others, consider him the best guitarist in the business. Because of this, I am eager to tell the rest of the world about him” stated Josh Vittek, President of Joshua Paul Vittek and Associates. “We are first starting with his Facebook Fan Page. Shortly after, we will follow up with reworks of his website, Myspace page, integrate a Twitter account and build a Youtube channel where fans can go to watch performance videos of him in action. We will be having a lot of fun with this account.”To learn more about Steve Trovato and see his new Facebook Fan Page, visit http://listn.to/SteveTrovatobandAbout Steve Trovato Steve Trovato is a guitarist known worldwide as both a performer and educator. Steve currently resides in Los Angeles and in 2001 released his much anticipated debut CD, entitled About Time…and his second release, Country Jazzmaster in 2007. Steve is a professor in The Studio Jazz Guitar Department at the University of Southern California’s Thornton School of Music. In addition, he has long been established in the print and DVD world authoring over 20 guitar instructional publications and over 50 instructional DVD’s for companies such as Warner Bros., Alfred Publishing, Lick Library, Mel Bay, Hal Leonard and more. He is also a regular contributor for magazines such as Guitar Player, Just Jazz Guitar, and more. To learn more about Steve, please visit his website at www.stevetrovato.com About Joshua Paul Vittek and Associates We are a public relations firm that strives to generate media coverage, publicity and brand awareness for our clients. We create third party validation by inspiring others to be a part of our client's communities, motivating them into becoming fans and educating them as to why our clients are leaders in their fields. When a message needs to be heard, we deliver loud and clear! www.jpvmedia.comJosh Vittek Joshua Paul Vittek and Associates P.O. Box 131793 Carlsbad, Ca 92013 760-298-0923

02-04-2022 | IT, New Media & Software
Net Diatom LP
Facebook unblocks Net Diatom
It was no secret that netdiatom.com was blocked for over 2 years across Facebook Inc's platforms forcing the company to rebrand under netdiatom.org. Net Diatom, a Midwest based web development firm, has had trouble with Facebook's unfair domain name blockage since 2019. Chief Partner Jeremy D Higgs sued Facebook over the issue in 2021 and still has a pending court date in April 2022. Higgs and Net Diatom contacted sorbs after
12-27-2018 | IT, New Media & Software
HackerPost
Hackerpost.co: FACEBOOK GRANTED SPOTIFY, NETFLIX, AND RBC ACCESS TO USERS’ FAC …
Hackerpost: The social networking site Facebook is in data-sharing partnership with Apple, Amazon, Microsoft, Spotify, Netflix, Royal Bank of Canada, Yahoo, and that’s just the beginning. Meetings with 50 former Facebook employees and corporate accomplices uncover that the Social-networking mammoth has conceded certain organizations with access to client information regardless of restrictions and protections. Facebook has clashed with the 2011 consent agreement with the Federal Trade Commission that has banished the
12-17-2018 | Business, Economy, Finances, B …
Facebook Help Desk Number
Dial +1844-489-7268 to our Facebook Number Support | Facebook Help
Dial (844)-489-7268 our Facebook Number Support, to get in touch with our Facebook Customer Support, for the fastest way to get Facebook Help. 24/7 support. Facebook is certainly the most powerful tool available over the internet in today’s world. You can connect to your friends, family, relatives and colleagues from all around the world. You can advertise your products, company, services and you can also earn through Facebook. http://www.facebooknumbersupport.com/ Facebook has become popular
10-10-2012 | Associations & Organizations
Glanzenburger
Toast to Facebook-Fans
Many weird campaigns have already been launched on Facebook. Now the student association “Glanzenburger” from Zurich, Switzerland, launched a new initiative: On December 1st they will personally drink a "Prosit!" (a toast) to everybody who likes their Facebook page and then publish the video. Currently there are 620 people and groups who like their page, but if this campaign becomes a raving success, they will be drinking many toasts to
05-12-2011 | Media & Telecommunications
Port-to-Port Consulting
Facebook Dumps Mark Zuckerberg
INDIANAPOLIS—Facebook pulled the plug on Indiana bankruptcy attorney Mark Zuckerberg’s internet Facebook account on Monday, citing false identity as the reason. Obviously, Indianapolis attorney Mark S. Zuckerberg has the same name as Facebook founder Mark S. Zuckerberg, but you would expect Facebook, the internet social-media giant, to have the capability to accommodate two or more people with the same names. Attorney Mark Zuckerberg said, “I was originally denied an account with
03-21-2011 | IT, New Media & Software
Whowish Ltd,
Facebook Business Venture: New Facebook Apps Support Local Ecommerce
Whowish Ltd. has announced the launch of two innovative new Facebook applications which encourage local trade and sustainable lifestyles. The e-commerce social media applications are called SwapSquare and CollegeSwap. The free apps allow Facebook users to buy, sell, and swap (barter) for products and services. SwapSquare organizes its users by their neighborhood zip code, while CollegeSwap organizes its users by the school which the user attends. According to Whowish, the benefits
Comments about openPR
9 o'clock: discuss press release with client, 10 o'clock: submit release to openPR, within the briefest possible time release is published and displayed in a prominent place on openPR.de. I am thrilled!
Zehra Spindler, Calypso Now! - Communication Agency