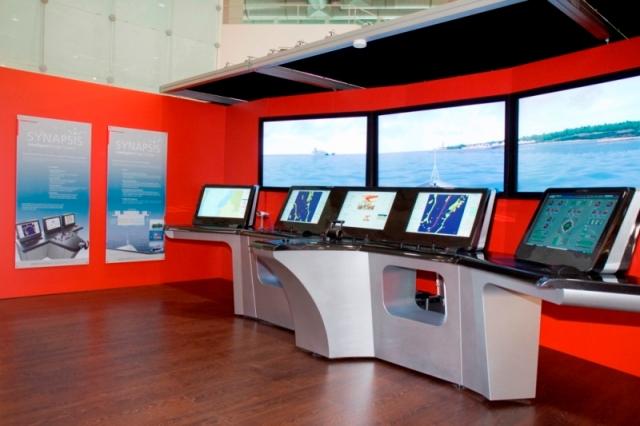 At the opening day of SMM the German navigation system supplier Raytheon Anschütz has launched its recently announced new Intelligent Bridge System within an official ceremony. The Integrated Navigation System (INS), which was given the name Synapsis Bridge Control, is designed to make navigation more efficient and to simplify operation for users. Raytheon Anschütz shows the Synapsis Bridge Control at booth # 320 in Hall B6.According to Raytheon Anschütz, Synapsis Bridge Control was chosen as brand name to symbolize the intelligence of the new navigation system generation with its immediate processing of data, a consistent data presentation to the operator and an intuitive support in decision making. The INS features new wide-screen, task-orientated Multifunctional Workstations. Using standard hardware and software, the workstations allows for full scalability and future expandability. Possible configurations are ranging from a stand-alone ECDIS workplace to a full integrated workstation that provides access to all nautical tasks such as route monitoring, collision avoidance, navigation control, status and data display or alarm monitoring. A central change of display color schemes as well as central dimming can be processed from any workstation within the INS.The configurations and tasks of the workstations are controlled by a newly developed Bridge Integration Platform. The platform provides common interfaces to further ship systems that enable the integration of additional applications such as automation, DP system or CCTV from various suppliers on the Multifunctional Workstations. Within the INS, all data is distribution by a new dual Ethernet bus to be stored independently at any workstation. Having all information consistently available throughout the whole navigation network also allows creating new display pages with respect to individual requirements. As an example, in accordance with the idea of e-navigation Raytheon Anschütz presents a new Voyage Efficiency Monitor. The joint display of navigation data with engine automation data and loadmaster computer data is to enhance bridge operations and support the navigator in right decision making, particularly with regard to the rudder steering, which can help to optimize voyage planning and fuel consumption. To integrate the operator interfaces of the intelligent alert management and the new Consistent Common Reference System (CCRS), Raytheon Anschütz has also enhanced its NautoConning display. Within the INS, the CCRS continuously observes the availability, validity and integrity of all sensor data and calculates a quality indicator for each sensor. The Conning displays the quality indicators and provides a system wide sensor and source selection menu including a choice between manual and automatic sensor selection. Within the automatic sensor selection mode, a set of the best sensor data is compiled automatically and distributed throughout the entire navigation system. Apart from increasing the ship’s safety through intelligent use of on board sensor information, this is expected to reduce work load of officers and pilots on duty. As an essential part of Synapsis Bridge Control, Raytheon Anschütz has also introduced the new adaptive NautoPilot 5000 with its color TFT and touch screen operation as well as the latest generation of Nautosteer AS steering control system. Based on CAN-bus, NautoSteer AS was developed with regard to fail-to-safe principles. All components are fitted with take-over function and include wire break and steering failure monitoring. Raytheon Anschütz says, apart from making commissioning and installation of systems at the shipyard easier, the new steering control sets new standards of highest safety at sea.Raytheon Anschütz GmbH is a subsidiary of the Raytheon Company (Waltham, MA, USA) and a part of the Integrated Defense Systems department (IDS, Tewksbury). The company was founded in 1905 as Anschütz & Co and currently has more than 500 employees. All of the essential components for safe ship navigation are developed, produced, and meticulously tested at the headquarters in Kiel. A worldwide service network with more than 200 service stations serves as a prerequisite for reliable operation round-the-clock.Raytheon Anschütz GmbH Zeyestr. 16-24 D-24106 Kiel Germanywww.raytheon-anschuetz.comPress Contact: Martin Richter Marketing Manager Communications Tel.: +49 431 3019 512 Fax: +49 431 3019 94512 E-Mail: martin_richter@raykiel.com

11-14-2018 | Industry, Real Estate & Constr …
FDB Panel Fittings
Bridge Handles now from FDB Online
Traditional bridge handles from FDB Panel Fittings Online store provide easy one-handed operation of doors, draws, access panels, cases and instruments with comfortable feel and aesthetically suited to industrial or office-style environments. Simple fitment is achieved quickly with screw fixing at either end as open front mounting or with decorative inserts, as well as the rear mounting options. These grab or “bow” drawer types handles for opening or carrying are available in
10-25-2018 | Business, Economy, Finances, B …
Jet Bridge Market Report 2018
Jet Bridge Market Report 2018: Segmentation by Type (Apron drive jet bridge, Nos …
Global Jet Bridge market research report provides company profile for Avicorp Middle East, Ameribridge, Deerns, ADELTE, CIMC Airport Facilities, FMT, JBT, Thyssenkrupp and Others. This market study includes data about consumer perspective, comprehensive analysis, statistics, market share, company performances (Stocks), historical analysis 2012 to 2017, market forecast 2018 to 2025 in terms of volume, revenue, YOY growth rate, and CAGR for the year 2018 to 2025, etc. The report also
11-01-2017 | Advertising, Media Consulting, …
IndexBox London Marketing
Bridge Market - Global Forecast to 2025
IndexBox has just published a new report "World: Bridges, Bridge Sections, Towers And Lattice Masts (Of Iron Or Steel) - Market Report. Analysis and Forecast to 2025" ( http://www.indexbox.co.uk/store/world-bridges-bridge-sections-towers-and-lattice-masts-of-iron-or-steel-market-report-analysis-and-forecast-to-2020/?utm_source=opr ). This report is best suitable for you if you: • Are planning to enter a new geographical market and wish to know which one is best for your product • Are planning to enter a new product market and want to have a
06-13-2017 | Arts & Culture
BookBuzz.net
The Bridge of the Golden Wood Release New Children’s Book The Bridge of the Go …
The Bridge of the Golden Wood Release New Children’s Book The Bridge of the Golden Wood Premio Publishing & Gozo Books are pleased to announce the upcoming release of their new children’s book, The Bridge of the Golden Wood. The book is 530 words in dyslexic-friendly font by award-winning kid’s author Karl Beckstrand teaching children about business and money. “Masterful … An immensely appealing book because of its readable style … and
09-02-2013 | Industry, Real Estate & Constr …
IBJ Technology
Smart Bridge - bridge bearings load control
The distribution can be determined of the load under bridge bearing load-bearing pillars or foundations with multiple sensors BBS 10_DS from IBJ technology. Uneven load entry can detect but also subsequently through still attached directly with sensors built into the bearing plate in the concrete. The applications range from the direct voltage measurement in the component to the measurement and monitoring of dynamic loads in real time. With the sensors is the
09-28-2012 | Arts & Culture
Wisconsinmade.com
Wooden Bridge Candles Illuminate Wisconsinmade.com
Wisconsinmade.com is known for delivering a taste of Wisconsin and now the online gourmet food and gift store is also sending the scent of Wisconsin with candles from Wooden Bridge Candles. The artisans at Wooden Bridge Candles craft eco-friendly, American made candles in a variety of comforting and cozy scents. With the help of Wisconsinmade.com, Wooden Bridge Candles ship nationwide. “From the wooden wick to the white frosted jar, no
Comments about openPR
Your portal is fast, simple, and easy to use. Others may have more functions but they also demand more editing time, you have to preformat the text in order to achieve a good result etc. I think openPR is really fantastic!
Andreas Knepper, wallmedien AG