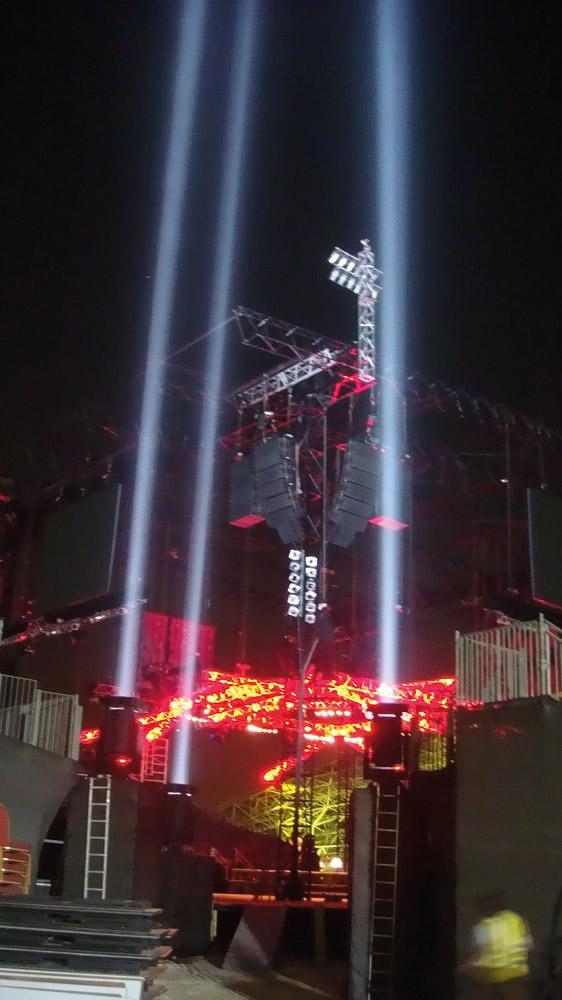 In April, the Ultimate Fighting Championship was staged for the first time in the United Arab Emirates. The setting was a square on the site of the still in construction Ferrari World theme park on Yas Island in Abu Dhabi. UFC 112 also marked the first time what is generally one of the largest indoor sporting events in the world was held in the open air. Commissioned by Gearhouse Staging Connection Dubai, A&O Technology Middle East contributed FALCON xenon searchlights to the light show for the event.In all, some sixteen FALCON BEAM colour 7000W and six FALCON 6000 CMY searchlights provided the highlights of the light show, marking the entry of the fighters into the arena and their return to the dressing rooms after each fight . The high-powered searchlights manufactured by alpha one were also used to illuminate the octagon itself, both during and between fights. For this purpose, FALCON BEAM 7000W searchlights were positioned in groups of four on platforms at all four corners of the stage. Meanwhile, roof of the main grandstand was illuminated in colour by FALCON 6000 CMY luminaires.Ultimate fighting or ‘mixed martial arts’ (MMA) is a full-contact sport that combines elements of all the martial arts including boxing, Brazilian jiu-jitsu, wrestling and Muay Thai. The tournament in Abu Dhabi, “UFC 112: Invincible”, included fights for the UFC Lightweight and Middleweight titles as well as others featuring some the biggest names on the MMA scene.A&O Lighting Technology GmbH, which was founded by Marco Niedermeier, has been actively engaged in the hiring and sale of show and architectural lighting equipment since 1995. A&O's diverse inventory includes special LED equipment and several hundred searchlights (high-power xenon floodlights) that can be used for well-known entertainment- and architectural lighting applications. It also has the exclusive worldwide distribution rights to a variety of architectural luminaries and searchlights, such as the FALCON® range from alpha one. A&O Lighting Technology, with its head office in Germany, is active worldwide with subsidiaries and offices in UAE, USA and UK. For more information, visit: www.ao-technology.comJuly 2010 / A&O Lighting Technology GmbH, Industriestraße 31-33, 28876 Oyten, Germany, Telephone: 0 42 07 / 66 84-0, Internet www.ao-technology.com, Contact: Tanja Niedermeier

03-22-2019 | Advertising, Media Consulting, …
Global Info Research
Urea Formaldehyde Concentrate (UFC) Market Size, Share, Development by 2024
Global Info Research offers a latest published report on Urea Formaldehyde Concentrate (UFC) Market Analysis and Forecast 2019-2025 delivering key insights and providing a competitive advantage to clients through a detailed report. The report contains 102 pages which highly exhibit on current market analysis scenario, upcoming as well as future opportunities, revenue growth, pricing and profitability. Click to view the full report TOC, figure and tables: https://www.globalinforesearch.com/global-urea-formaldehyde-concentrate-ufc-market_p107318.html   Urea formaldehyde concentrate (UFC) is a
04-26-2018 | Business, Economy, Finances, B …
busines news
UFC Headliners Meet in Singapore To Launch Public Ticket Sales For UFC® Fight N …
NEwspatrolling.com: UFC® legend Cowboy (33-10, 1NC, fighting out of Albuquerque, N.M.) and rapidly rising young British star, Leon "Rocky" Edwards (14-3, fighting out of Birmingham, England) officially launched public ticket sales to the region's highly anticipated event UFC® FIGHT NIGHT SINGAPORE: COWBOY VS EDWARDS Presented By AirAsia taking place at the Singapore Indoor Stadium on Saturday, June 23rd.
02-10-2012 | Sports
Z-Elite Nutrition
Mike Russow Won at UFC on Fox 2
The Chicago police officer Mike Russow put on a show for the native land crowd and defeated grappling star Jon Olav Enemo via unanimous decision this Saturday night (Jan. 28, 2012). The UFC pro & team member of sports supplement - Ninja, Mike Russow was cheered on by the native fans at the United Center on Saturday night as he came down to the ring out to fight Jon-Olav Einemo. In the
03-23-2011 | Health & Medicine
Myprotein
Myprotein's Ross Pearson Defeats Spencer Fisher at UFC 127
Manchester, United Kingdom (XX Month 2011) - Myprotein, the UK's top online supplier of protein supplements and sports nutrition products, were extremely proud to see their sponsored fighter, Ross 'The Real Deal' Pearson, take his MMA record to 12-4 (4-1 in the UFC) with a hard-fought unanimous decision victory over grizzled veteran Spencer 'The King' Fisher at UFC 127 in Sydney, Australia. The win is arguably the most significant of Pearson's
12-28-2010 | Health & Medicine
Myprotein.com
Myprotein.com to Help MMA Fighter Ross Pearson Prepare for UFC 127
Manchester, United Kingdom (17 December 2010) – Although mixed martial arts fighters step into the cage or ring alone, they won’t hesitate to underline that their performance on the night is very much the result of a team effort. Myprotein.com are delighted to be a part of Ultimate Fighting Championship lightweight Ross ‘The Real Deal’ Pearson’s training team as he prepares for his next bout, to be held at
11-15-2010 | Leisure, Entertainment, Miscel …
Watch live Channels
UFC 122 Comes To Watch Live Channels This Winter!
OpenPR (Press Release) – Nov 12, 2010 – UFC 122 (Ultimate Fighting Competition) is the second event to take place in Germany. Vitor Belfort and Yushin Okami are ready for a head-to-head match. They are one win away from the UFC Middleweight Title. So, if you want to watch UFC 122, then you have come to the right place. We will stream it live, right here! On September 21, 2010,
Comments about openPR
OpenPR ist the nicest and most clearly laid out PR platform I have seen to this day. The press releases are displayed very nicely and clearly and without any unnecessary frills. The updates are fast and the finished release looks appealing and is clearly legible. Even with 16 years of experience one discovers new things from time to time. Congratulations!
Gabriele Ketterl, Director Marketing & PR, Menads