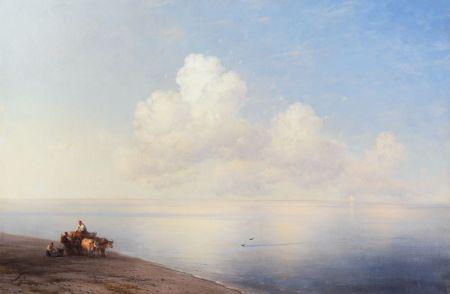 Munich, December 04, 2018, (kk) – The autumn auction season at Ketterer Kunst in Munich kicked off with an extremely successful sale of 19th Century Art. Grossing total proceeds of more than € 1.6 million (with just 128 lots!) it was one of the best auctions this department has ever seen. The star of the evening was Ivan Aivasovsky‘s atmospheric "Ruhige See"."Today’s auction has proven that the combination of a high recognition factor, a flawless provenance, and a reasonable estimate price is the key ingredient for a guaranteed success”, says Robert Ketterer. The auctioneer and company owner continues to explain: "Additionally, two other significant components fell into place, as this sale was dominated by open sellers and active buyers. This favorable situation led to an excellent sales quota of more than 75% by lots, as well as an average increase of around 70% per sold lot. What is particularly worthwhile mentioning is the absolute novelty that from the focused range of just 128 works a total of 42 works, around a third, broke the € 10,000 line.” Top 5 No. 89: Ivan Aivasovsky – Ruhige See. Result € 212,500* calling price: € 120,000 No. 92: Max Liebermann – Die Wochenstube – Schweinekoben. Result € 162,500* calling price: € 60,000 No. 18: Carl Spitzweg – Am Sonntagmorgen. Result € 87,500* calling price: € 36,000No. 111: Edward Cucuel – Schöner Herbstnachmittag. Result € 62,500* calling price: € 50,000No. 112: Karl Hagemeister – Schwere See. Result € 55,000* calling price: € 25,000 The auction’s most expensive work is an oil painting by Ivan Aivasovsky from 1897. Contrary to what the title suggests, the "Ruhige See" (Calm Sea) (lot 89) made for a real storm in the packed saleroom. Around half a dozen art lovers, mainly from Germany and Russia, fought a pulsating bidding skirmish. Eventually, a tenacious collector from Russia kept his head and stood his grounds with an online bid of € 212,500*. It took a collector from Southern Germany the amount of € 162,500 to call Max Liebermann‘s museum-quality oil painting "Die Wochenstube – Schweinekoben" (lot 92) his own. Called up at € 60,000 the future owner, present in the saleroom, competed for the excellent painting with a complete provenance against several other art lovers and a German museum. Two other works placed at the top of the list of desires came from Carl Spitzweg. While "Der Maler” (lot 4) was called up at € 20,000 and lifted to € 30,000* by a commission from an art lover from Baden-Württemberg, a Bavarian bidder on the phone let the oil painting "Am Sonntagmorgen” (lot 18) soar to heights of two and a half times the calling price. Rivals from Germany and Spain surrendered at € 87,500*.While Edward Cucuel‘s fine painting "Schöner Herbstnachmittag" (lot 111) was sold to a Southern German collector in the saleroom for a price of € 62,500, a collector from Brandenburg rewarded Karl Hagemeister’s seascape "Schwere See” (lot 112) the result of € 55,000*, and more than doubled the calling price of € 25,000. Almost half a dozen collectors, most of them from the artist’s home region, tried to win the impressive museum-quality wave picture by bidding on the phone.An array of half a dozen works by Franz von Stuck was completely sold. It was led by a bronze "Amazone” (lot 98) that went to a Bavarian bidder in the saleroom for € 52,500* whose offer of almost the fourfold of the calling price of € 14,000 made for great astonishment in the saleroom. With a large number of commissions and around half a dozen phones from Germany, France and Great Britain the spectacular outcome had been anticipated. A Southern German phone bidder and an art lover from Northern Germany ran a real neck-and-neck race. The latter eventually won Oswald Achenbach‘s "Blick auf den Vesuv" (lot 84) with a commission that would have allowed for some more steps. In the end he needed € 42,500* to make the work that was called up with € 30,000 sure for himself. Four Chiemsee landscapes by Joseph Wopfner that were called up at the beginning of the auction were especially popular with bidders from Southern Germany and Austria. All of them were sold with sharp increases. The sharpest price rise was realized by ”Fischer am Chiemseeufer" (lot 22)with a fivefold of its calling price and a result of € 25,000* granted by a Hessian art lover. More works by the Chiemsee painters, as well as by other Southern German artists and representatives of English landscape- and Dutch genre painting are on offer in the online auction of 19th Century Art on www.ketterer-internet-auction.com until December 15, 3 pm. Fine results were also realized by the following: Lot 114, Josef Stoitzner (oil), Wechselgebirge im Vorfrühling. Starting price € 8,000, result € 40,000* Lot 103, Alexander Koester (oil), Sieben Enten… Starting price € 11,000, result € 40,000* Lot 58, Johann Wilhelm Preyer (oil), Früchtestillleben. Starting price € 20,000, result € 37,500* Lot 113, Maxime Emile Louis Maufra (oil), Entré d’un trois-mats. Le Havre. Starting price € 7,200, result € 35,000*Unsold objects can be acquired in the post auction sale until December 21, 2018. The result list is available by phone on +49-(0)89-552440. * The rounded result is the hammer price + 25 % commission for hammer prices up to € 500,000.The family company Ketterer Kunst (www.kettererkunst.com and www.ketterer-internet-auctions.com), with headquarters in Munich and branches in Hamburg, Duesseldorf, Berlin and the USA, was founded in 1954. It is one of the leading European houses for auctions of Fine Art from the 19th to the 21st Century and Rare Books. The 2017 art market review, compiled by artprice.com, ranks Ketterer Kunst on place 19 in the TOP 100 Fine Art Auction Houses worldwide. The auctioneer's clientele predominantly consists of international collectors, art dealers, curators and museums.Press inquiries: Ketterer Kunst Joseph-Wild-Str. 18, 81829 Munich, Germany Michaela Derra M.A. +49-(0)89-55244-152 m.derra@kettererkunst.de Client inquiries: Ketterer Kunst Joseph-Wild-Str. 18, 81829 Munich, Germany +49-(0)552440, fax: -177 infomuenchen@kettererkunst.de www.kettererkunst.com

11-16-2018 | Politics, Law & Society
i.b.s. International Operative Services e.K.
German Maritime Security 2018, German Government Statement!
Despite all international and national efforts, piracy remains a serious peril for the international shipping industry. Especially in Asia (i.e. Chittagong/Bangladesh or on the Strait of Malacca), but also in South America (e.g. Bay of Santos/Brazil or in the port of Callao/Peru) robbery or piracy there has recurred in the recent past. At the West African coast the number of incidents had raised even by 50% with 66 incidents this
07-26-2017 | Business, Economy, Finances, B …
Teck Language Solutions Inc.
More German Investments Mean More German Translations
Why Language Continues to be an Obstacle for Investing in Germany Germany is one of the prime markets for foreign investments, with an estimated 4% of global direct investment making its way into the country. In fact, the world’s second richest man, Warren Buffett, who is only beaten to the top spot on the financial leaderboard by Microsoft Founder Bill Gates, believes Germany to be a ‘great market’, and confirms the
08-18-2015 | Industry, Real Estate & Constr …
IKA®-Werke GmbH & Co. KG
German Design Award 2015
German Design Council Awards a Special Mention to the LR 1000 Laboratory Reactor and Nominates the Tube Mill Staufen, Germany, February 23, 2015 — For the second time, a device produced by IKA® Werke has received the "Special mention for exceptional design quality" award from the German Design Council. The company was presented with the award in the "Excellent Product Design — Industry" category as part of the German Design Award 2015
12-24-2011 | Politics, Law & Society
bunk-alliance Rechtsanwälte
German Local Trade Tax
All the companies in Germany are liable to pay not only corporate income tax, whose rate is nowadays about 15% of the annual profit of the company, but also trade tax (Gewerbesteuer), which is a tax of German characteristics. Why would we say that trade tax is of German characteristics? Because it is different from the corporate income tax, which is charged by the German Federal Government and it is difficult
01-08-2010 | Business, Economy, Finances, B …
Integral Fusion e-Services Pvt. Ltd.
Integral Launches German Bureau
Integral Launches German Bureau Appoints Suchit Manchanda as the Head of Operations January 4, 2010: Germany: Integral Fusion, a leading software services firm, has launched operations in Germany and announced the appointment of Suchit Manchanda as their Managing Director. The German bureau will be responsible for strategic business development in European Union organizations and client servicing. Suchit a world class MBA from Hochschule Nürnberg, Germany and a Masters in IT from Jamia
05-20-2008 | Leisure, Entertainment, Miscel …
SkatMedia
ISPA – German Masters 2008
Magdeburg – Over the long weekend of the 4. Mai more than 1.000 Skat players filled the Mittelland hall in Barleben. The tournaments of the 30. German Mastery and the 27. open International German Single Mastership were held by the International Skat Players Association, ISPA Germany. Patrons of the Games were the 1st Barleber Skat sports club e.V. and the Skat club \"Burger Ihleskater\", whose good organization together with the
Comments about openPR
We publish our press releases on openPR.de because we like people who are "open" - just like us.
Frank Obels, CEO, INCONET - Informationssysteme, Communication und Netzwerkberatung GmbH