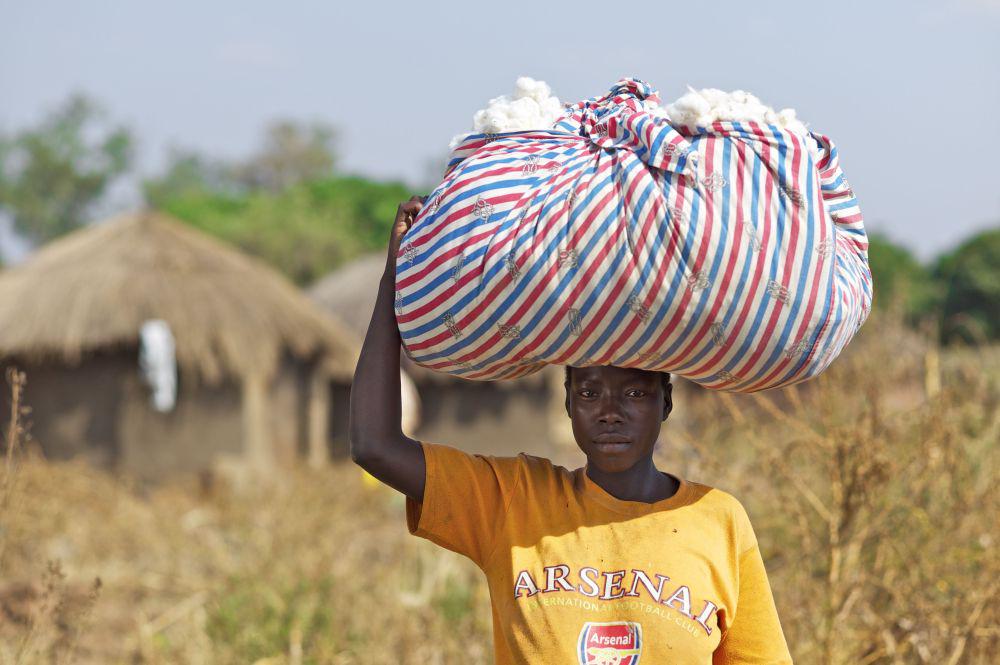 Cotonea has come fourth in a list of the ten largest manufacturers of fair organic cotton – of 111 companies worldwide that took part in the survey. This has just been announced by the US non-governmental organization Textile Exchange (TE). For more than ten years Cotonea has been using fair organic cotton from its own cultivations and has now been rewarded for its many years of commitment in Uganda and Kyrgyzstan with fourth place in the Organic Fair Trade Ranking (OFT).TE’s Annual Benchmark Report 2018 recognizes Elmer & Zweifel as a company whose Cotonea brand has managed to balance the price challenges of the market and Cotonea’s ethical commitment to all the production companies involved. “Cotonea uses both its technical know-how and its fair organic cotton to produce high-quality products which are monitored all the way from the fibre to the final product.”“As delighted as we are with the result, we are disappointed not to see any of the major manufacturers of organic cotton on the list, apart from Coop Switzerland. Organic and ethical – as far as we’re concerned, you can’t separate the two. Life in the countries of origin would improve significantly if “the big ones” insisted on fair standards, too”, is how Cotonea CEO Roland Stelzer sees the result.For more than ten years Cotonea has been sourcing its cotton from its own organic and ethical projects in Kirgistan and Uganda. The TE Report 2016 for the first time listed Cotonea as one of the top ten brands with the highest organic cotton cultivation.About Textile Exchange: The non-governmental organization Textile Exchange, based in Texas/USA, looks to working with farmers, manufacturers/brands and retailers to promote the pro-duction and use of organic cotton. Textile Exchange focuses on sustainability and transparency throughout the entire textile value chain.Cotonea/Elmer & Zweifel: The company has been focusing on organic and ethical cotton and the production of home textiles and clothing since 2003. Bed and bath linen, bedding, baby clothes as well as clothing from their own organic-cotton projects are manufactured and distributed under the brand name Cotonea. The term “Cotonea inside” represents the manufacturing of organic and ethical Cotonea fabrics by manufacturers (some of which are well-known).Gebr. Elmer & Zweifel GmbH & Co. KG Auf dem Brühl 1-9 72658 Bempflingen Press Contact: indivisio Hannelore Ohle Hohnerstr. 25 70469 Stuttgart 0711 75881374 0170 2009751 hannelore.ohle@indivisio-pr.de

06-08-2020 | Fashion, Lifestyle, Trends
Cotonea - Gebr. Elmer & Zweifel GmbH & Co. KG
How does a customer know how “green” a textile manufacturer is?
Our sales representatives are often asked at fairs how a customer can know how “green” a textile manufacturer is. In concrete terms, the question is whether a producer or supplier really does what it claims to do. Is a quality standard label such as Oeko-Tex (with relatively low standards) enough for the consumer or does he ask for a completely organic product with high standards such as IVN BEST or
09-05-2019 | Politics, Law & Society
Cotonea - Gebr. Elmer & Zweifel GmbH & Co. KG
Cotonea contributes to achieving the UN’s Sustainable Development Goals (SDG): …
In order to finally and fundamentally move the world in the direction of sustainable development, in 2014 the United Nations (UN) agreed on 17 global Sustainable Development Goals. The member countries should implement these by 2030. In order to achieve this, everybody has to contribute. Simply by cultivating and processing fair cotton, the world’s poverty could be drastically reduced. Cooperative models with fair pay and the participation of farmers, run in
11-12-2018 | Energy & Environment
Cotonea - Gebr. Elmer & Zweifel GmbH & Co. KG
Cotton requires only little water – when professionals are at work!
Who invented it, the fairy tale of thirsty cotton; who claimed it was true, repeated and spread it, thus making everyone believe it? Maybe the synthetic fibre industry? The truth is: cotton uses less water than all other common field crops! And in the end, farmers do have to cultivate some kind of crop. This escalation clearly shows that the cotton plant is not the problem. When taking water shortage into
11-06-2017 | Business, Economy, Finances, B …
Cotonea - Gebr. Elmer & Zweifel GmbH & Co. KG
Ecologically-fairtrade (OFT) cotton: Cotonea is the third largest processor worl …
In 2016, Cotonea occupied the third place in NGO Textile Exchange’s ranking list of the 10 larg-est processors of ecologically-fair cotton worldwide. For more than 10 years Cotonea has been consistently sourcing organically-fair cotton from its own cultivation and, for their long-standing commitment in Uganda and Kyrgyzstan, have now been rewarded with third place on the Organic Fair Trade ranking list (OFT). Only Boll & Branch from New Jersey and

01-21-2021 | Advertising, Media Consulting, …
Report Ocean
Khat (Plant) Market is in huge demand | Uganda, Yemen, Somalia
The ‘ Khat (Plant) market’ research report added by Report Ocean, is an in-depth analysis of the latest developments, market size, status, upcoming technologies, industry drivers, challenges, regulatory policies, with key company profiles and strategies of players. The research study provides market overview; Khat (Plant) derived key statistics, based on the market status of the manufacturers and is a valuable source of guidance and direction for companies and individuals interested
01-20-2021 | Advertising, Media Consulting, …
Ken Research Pvt Ltd
Uganda Agriculture Market | Uganda Agriculture Industry | Uganda Agriculture Mar …
Agriculture is that the core sector of the Ugandan economy and also the main manager. This sector is the key determinant within the country’s efforts to scale back impoverishment, and attain economic process within the immediate years. Uganda has one among the quickest population expansion rate of around 3.3%, and this itself, is that the principal driver for the rise in consumption of crops in Uganda. Uganda’s Favourable soil conditions
06-28-2017 | Energy & Environment
Future Energy Uganda
Why Uganda is the next energy investment destination
Uganda’s immense power potential and enormous energy investment opportunities will be in focus when stakeholders and decision makers meet for a strategic two-day conference and showcase during the inaugural Future Energy Uganda in Kampala from 12-13 September 2017. “The numbers in Uganda’s energy sector speak for themselves: the country is without a doubt the next energy investment destination,” says Future Energy Uganda event director Le-ann Hare-Keymer. She explains: “Uganda aims
02-20-2017 | Advertising, Media Consulting, …
GlobeMetrix
Global Sweet Potato Market 2017 - Indonesia, Angola, Uganda, Vietnam
The report headlined “Global Sweet Potato Market 2017” offers important insights into the global Sweet Potato market along with the updated industry data and industry upcoming trends, allowing you to point out the products and end users driving Revenue growth and profitability. Report Summary The need of this vital research study on “Global Sweet Potato Market 2017” is to offer industry investors, company officials, and industry players with in-depth analysis to
08-18-2016 | Leisure, Entertainment, Miscel …
LastThink
Uganda Radio Live
Our smart professionals have done their best to generate this Ugandan Live Radio which will absolutely accommodate our users’ demands concerning to the development of innovative techniques. The following application is free of charge and is compatible only with iPhone, iPod and iPad touch. This innovative app is full of vast number of Radio Stations which are available in any country. Consequently, you are granted an exclusive opportunity to listen
06-11-2012 | Business, Economy, Finances, B …
Techno Brain
Techno Brain Uganda achieves ISO 9001:2008 Certification
Techno Brain, an ISO 9001:2008 certified and Africa’s leading software development, IT Training and BPO / ITES company with operations in Africa, USA, UAE, UK and India, proudly announces that, its Uganda IT Solutions division has achieved International Organizations for Standardization’s (ISO) 9001:2008 Quality Management System (QMS) Certification. Techno Brain Uganda is the only IT Training and IT Solutions company in the region to achieve this milestone. ISO 9001: 2008
Comments about openPR
OpenPR ist the nicest and most clearly laid out PR platform I have seen to this day. The press releases are displayed very nicely and clearly and without any unnecessary frills. The updates are fast and the finished release looks appealing and is clearly legible. Even with 16 years of experience one discovers new things from time to time. Congratulations!
Gabriele Ketterl, Director Marketing & PR, Menads