Cotton requires only little water – when professionals are at work! 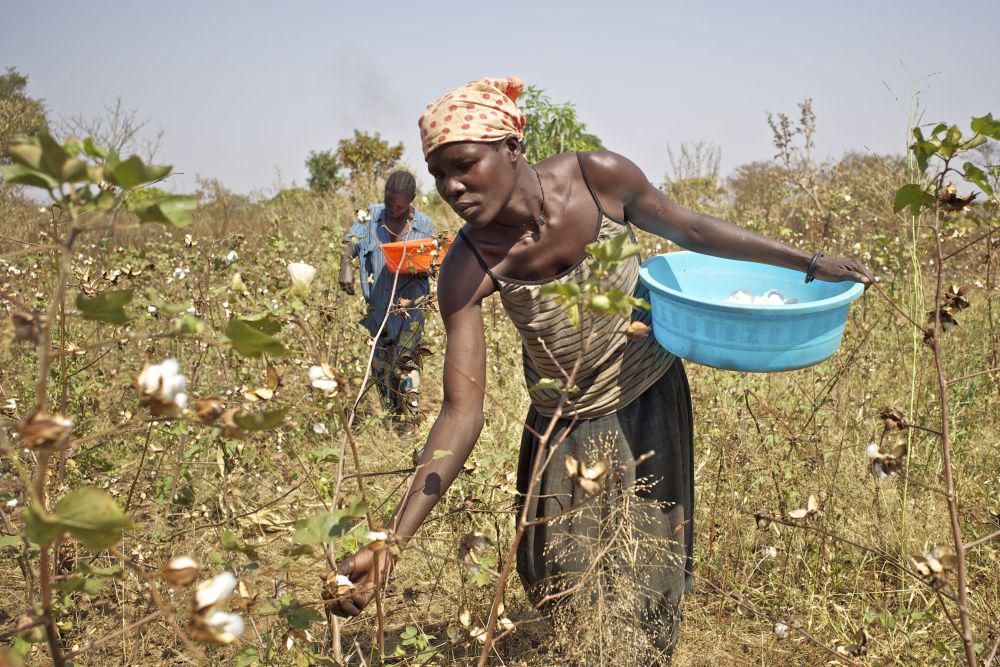 Who invented it, the fairy tale of thirsty cotton; who claimed it was true, repeated and spread it, thus making everyone believe it? Maybe the synthetic fibre industry? The truth is: cotton uses less water than all other common field crops! And in the end, farmers do have to cultivate some kind of crop.This escalation clearly shows that the cotton plant is not the problem. When taking water shortage into account, the farmer is actually more likely to decide to cultivate cotton instead of other field crops. Location, cultivation methods and irrigation management are more likely the root of any problems.Of course, cotton, like any other plant, likes growing in moist soil during its 3-month period of growth (it does not like swampy soil, as is the case with monocultures with bad water management). During its ripening stage the temperature should be around 30 degrees Celsius, humidity or even wetness decrease its quality. The area between the 32nd parallel south to the 37th parallel north, where there has always been adequate rain up until now, provides the ideal loca-tion. There, no plants have to compete with each other for water.But here too, many sources now mention the 45th parallel north as a possible cultivation area for cotton. Irrigation management will be the deciding factor as to whether the uncontrolled surface irrigation of monocultures will cause an environmental catastrophe such as the Aral Sea drying up in Uzbekistan, a country on the 42nd latitude. Targeted drip irrigation lowers the water consumption enormously as no water is lost to evaporation (and not to the so-called “thirst” of the cotton plant). Israel plays a leading role in this irrigation method.Mismanagement as well as the continued repetition and spreading of incorrect facts have hurt the reputation of this modest plant, which has been used for centuries. This misinformation has simultaneously discredited the farmers who cultivate cotton in addition to other crops on their fields. This image has, at the very least, not had a positive effect on companies which cultivate organic cotton according to fair trade regulations. We must finally differentiate between the fake tales that have been damaging this ancient crop and the consequences of monocultures, “the more, the better” method of irrigation and the incorrect choice of location.Cotonea / Elmer & Zweifel: the company has been concentrating on organically-fair cotton and the production of home and household textiles and outerwear since 2003. Under the brand name Cotonea, the company produces and sells bed and bath linen, bedding and baby linen as well as clothing from their own organic cotton projects, and the term: “Cotonea inside” means that ecologically-fair Cotonea-fabrics have been used by (often well-known) brandname manufacturers in their products.indivisio Hannelore Ohle Hohnerstr. 25 70469 Stuttgart +49 711 75881374 +49 170 2009751 hannelore.ohle@indivisio-pr.de

You can edit or delete your press release Cotton requires only little water – when professionals are at work! here

06-08-2020 | Fashion, Lifestyle, Trends
Cotonea - Gebr. Elmer & Zweifel GmbH & Co. KG
How does a customer know how “green” a textile manufacturer is?
Our sales representatives are often asked at fairs how a customer can know how “green” a textile manufacturer is. In concrete terms, the question is whether a producer or supplier really does what it claims to do. Is a quality standard label such as Oeko-Tex (with relatively low standards) enough for the consumer or does he ask for a completely organic product with high standards such as IVN BEST or
09-05-2019 | Politics, Law & Society
Cotonea - Gebr. Elmer & Zweifel GmbH & Co. KG
Cotonea contributes to achieving the UN’s Sustainable Development Goals (SDG): …
In order to finally and fundamentally move the world in the direction of sustainable development, in 2014 the United Nations (UN) agreed on 17 global Sustainable Development Goals. The member countries should implement these by 2030. In order to achieve this, everybody has to contribute. Simply by cultivating and processing fair cotton, the world’s poverty could be drastically reduced. Cooperative models with fair pay and the participation of farmers, run in
11-28-2018 | Politics, Law & Society
Cotonea - Gebr. Elmer & Zweifel GmbH & Co. KG
Cotonea is the world’s fourth-largest processor of fair organic cotton
Cotonea has come fourth in a list of the ten largest manufacturers of fair organic cotton – of 111 companies worldwide that took part in the survey. This has just been announced by the US non-governmental organization Textile Exchange (TE). For more than ten years Cotonea has been using fair organic cotton from its own cultivations and has now been rewarded for its many years of commitment in Uganda and
11-06-2017 | Business, Economy, Finances, B …
Cotonea - Gebr. Elmer & Zweifel GmbH & Co. KG
Ecologically-fairtrade (OFT) cotton: Cotonea is the third largest processor worl …
In 2016, Cotonea occupied the third place in NGO Textile Exchange’s ranking list of the 10 larg-est processors of ecologically-fair cotton worldwide. For more than 10 years Cotonea has been consistently sourcing organically-fair cotton from its own cultivation and, for their long-standing commitment in Uganda and Kyrgyzstan, have now been rewarded with third place on the Organic Fair Trade ranking list (OFT). Only Boll & Branch from New Jersey and