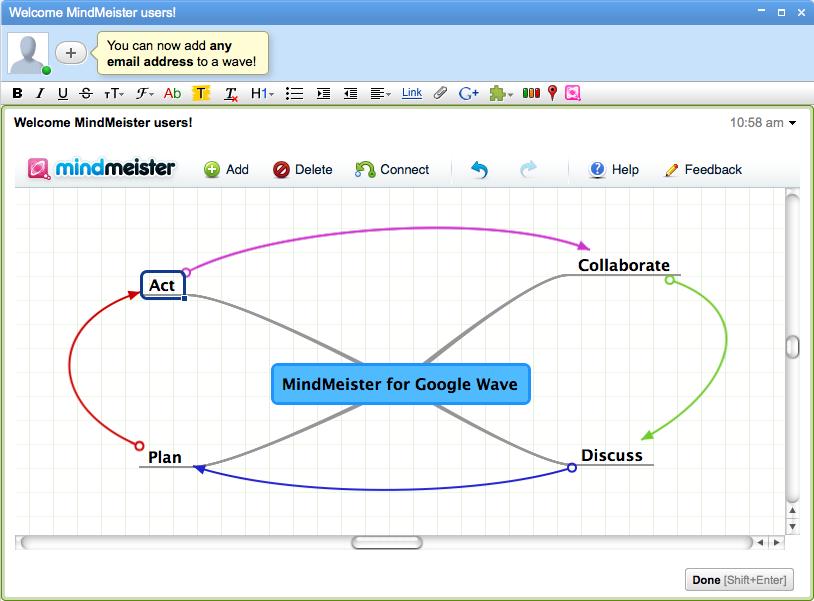 MUNICH, GERMANY, JUNE 7, 2010 Leading mind mapping and collaborative working innovator MindMeister announced today the public beta launch of their Google Wave gadget. This addition of MindMeister to Google Wave will now give Wave users a number of features and functionality of MindMeister’s award winning interface within their new and existing Waves.Since it’s beta launch in October 2009, Google Wave has been facilitating communication and collaboration between millions of users from around the globe. Equal parts document and conversation, Google Wave allows collaborators to share text, images, videos, and now mind maps all within an easily followed timeline. Google officially removed the beta status of Wave at this year’s Google I/O conference, and is now available to all – no invites needed.To utilize the MindMeister beta gadget, Google Wave users may simply visit the Google Wave extensions gallery, and install the MindMeister gadget. As with all Google Wave extensions, users may “Try It Now!” before committing to adding the gadget to their accounts. Once installed, users will find the MindMeister icon on their toolbar, and with one click, may easily insert MindMeister’s powerful collaboration and brainstorming tools into a Wave.“Since our inception, MindMeister has stood for collaborative, online real-time brainstorming. Google Wave shares many of the same attributes, and building a suitable gadget was simply a matter of time,” MindMeister COO Michael Hollauf comments. “The gadget is something that both MindMeister and Google Wave users have been requesting for quite some time now, and we’re more than happy to deliver.”The MindMeister for Google Wave gadget is currently in beta phase, and does not contain all of the functionality currently available at MindMeister.com. “The gadget is up and running, but contains only a fraction of MindMeister’s full capabilities. Over the coming weeks, we’ll be adding more and more functionality, and trying to incorporate as many user requests as possible,” says Hollauf.ABout MindMeisterMindMeister is the leading web-based brainstorming and mind mapping solution. Over 35 million ideas have been generated by individuals and businesses using its unique, award-winning interface. MindMeister is hosted online and runs in all modern web browsers without the need for an installation of any kind. With a planned iPad application and live mobile application for the iPhone, MindMeister allows users to work on their ideas wherever they are. MindMeister’s patent-pending History View lets users review each action within a mind map even years after the event.######################Contact:Dan Taylor dan@mindmeister.com MindMeister.comMeisterLabs GmbH Dornacher Strasse 3d 85622 Feldkirchen Germany

03-16-2016 | IT, New Media & Software
MindMeister
MeisterTask Adds Seamless Access to Hundreds of Web-Services Via Zapier
MeisterTask today announced its integration with Zapier, the popular webapp-automation service which enables non-developers to connect apps via simple workflow automations called ‘Zaps’. Through the integration, MeisterTask users can now connect their project boards with more than 500 other web applications. “The Zapier integration opens a whole new world of possibilities for our users,” said MeisterLabs Managing Director, Till Vollmer. “A lot of our previous integrations were largely geared towards developers
12-19-2014 | IT, New Media & Software
MindMeister
MindMeister Brings Visual Collaboration to a Whole New Level
Munich, December 16, 2014: After creating the first collaborative online mind mapping app in 2007, MeisterLabs, the company behind MindMeister, today released a new feature for its popular online tool that promises to bring the collaborative experience to a completely new level. Just like in 2007, the developers of MindMeister got inspired by Google’s online text editor Google Docs, which enables users to collaboratively edit text in a document. MeisterLabs
07-02-2014 | IT, New Media & Software
MindMeister
MindMeister for Glass Enables Users to Insert Ideas Into Mind Maps While on the …
MindMeister, the market-leading online mind mapping solution, just released a Glassware adaptation of its popular Geistesblitz feature, making it possible for users to capture ideas with Google Glass and automatically send them to their MindMeister account. MindMeister for Glass is the latest in a long line of MindMeister integrations with Google products, such as Google Drive, Google Docs and Google Hangouts, among others. The Glassware is based on MindMeister’s popular Geistesblitz
03-13-2014 | IT, New Media & Software
MindMeister
MindMeister Develops Add-on for Google Docs
MindMeister, the market-leading online mind mapping and brainstorming solution, today announced the release of a free add-on for Google Docs, enabling users to turn bullet point lists into mind maps and automatically insert them into their documents. Following the long and successful partnership between Google and MindMeister, which produced integrations in Google Hangouts and Google Drive, among others, MindMeister was invited to create an add-on for Google Docs, Google’s web-based office

10-21-2020 | Business, Economy, Finances, B …
Zion Market Research
Global Wave and Tidal Energy Market 2020 Business Strategies – Marine Current …
The Zion Market Research added a new report “Wave and Tidal Energy Market by Type (Tidal Energy, Wave Energy) by Technology (Tidal Steam Generator, Pendulor Device, Oscillating Water Columns, Barrage, Others), and by End-User (Residential, Commercial, Industrial): Global Industry Perspective, Comprehensive Analysis and Forecast, 2017 - 2024” in its database, which provides an expert and in-depth analysis of key business trends and future market development prospects, key drivers and restraints,
04-18-2019 | Health & Medicine
Market Density
Global Wave Spring Market Research
Global Wave Spring Market Research Report covers the makers' information, including shipment, value, income, net benefit, talk with the record, business appropriation and so forth., this information enables the customer to think about the contenders better. This report likewise covers every one of the areas and nations of the world, which demonstrates a territorial improvement status, including market size, volume and esteem, and added value information. Additionally, the Global Wave
11-15-2018 | IT, New Media & Software
Market Research Future
Millimetre Wave Technology Market 2018-2023 | Leaders E-Band, Farran Technology, …
Market Scenario: The Millimeter wave technology is also refer as extremely high frequency. This frequency range lies between 30 Ghz and 300 Ghz. These are the bands that are used for high-speed wireless broadband communications of 5G wireless technology. Thus, the adoption of fifth-generation technology will led to the development of 5G technology. Additionally, the wireless technology under which the expansion of mobile data rates will reach to multi gigabit-per-second range
08-24-2018 | Energy & Environment
TMR Research
Wave and Tidal Energy Market Forecast 2017 - 2025 : Pelamis Wave Power Ltd., Aqu …
Global Wave and Tidal Market: Snapshot The global market for wave and tidal energy is on a path of a prosperous growth. The increasing consumption of electricity across the globe – both in established and emerging economies – is expected to substantially drive the overall development of the global market. Some of the other key factors responsible for the growth of the global wave and tidal energy market can be termed
08-03-2018 | Fashion, Lifestyle, Trends
Melodic Digital
Wave Away Your Worries
We are excited to announce that Pineapple Island will be hosting free mindfulness sessions at Boardmasters festival, to celebrate their collaboration with the Wave Project charity. Guided mindfulness sessions will be held three times per day, between the 8th and 12th August, at Watergate Bay in Cornwall. The growing mental health crisis in the UK is affecting more and more young people.. The mental health charity Mind claims 1 in
12-07-2017 | Business, Economy, Finances, B …
Vandal Media Center
New Wave In CryptoTrading 2018
Nakamoto Capital is proud to announce Pre-ICO of its new project — CoinPlace platform. This is the first platform in the world that offers P2P service for direct trading of cryptocurrency of any volume or kind (bitcoin, altcoin, etc.) CoinPlace is eBay for the whole variety of cryptocurrencies and tokens. It is PayPal for new businesses based on the ICO model. Now users buying crypto assets face a number of challenges:
Comments about openPR
OpenPR ist the nicest and most clearly laid out PR platform I have seen to this day. The press releases are displayed very nicely and clearly and without any unnecessary frills. The updates are fast and the finished release looks appealing and is clearly legible. Even with 16 years of experience one discovers new things from time to time. Congratulations!
Gabriele Ketterl, Director Marketing & PR, Menads