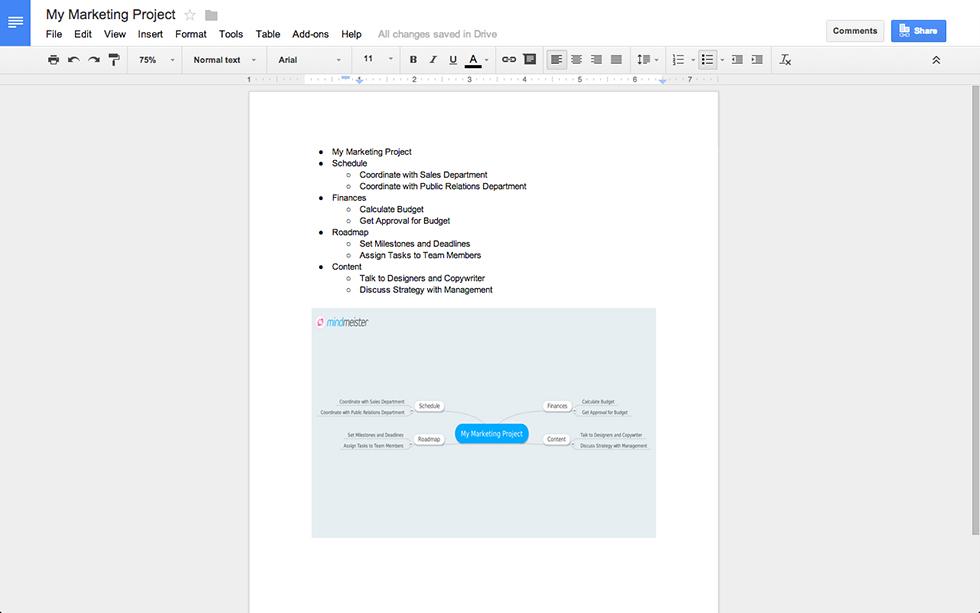 The MindMeister Add-on for Google Docs

MindMeister, the market-leading online mind mapping and brainstorming solution, today announced the release of a free add-on for Google Docs, enabling users to turn bullet point lists into mind maps and automatically insert them into their documents.Following the long and successful partnership between Google and MindMeister, which produced integrations in Google Hangouts and Google Drive, among others, MindMeister was invited to create an add-on for Google Docs, Google’s web-based office suite within Google Drive. The add-on is available through Google’s just released add-on store, which allows users to install and manage third-party apps and thus add new features to Google’s free web apps. “During their design and infrastructure engineering phase, Google reached out to us to discuss a possible MindMeister add-on for Google Docs,” MeisterLabs Managing Director, Till Vollmer said. “We brainstormed a few different angles of how such an add-on could look like and what would add the most value to a Google document. Within about a month we developed a working prototype that would subsequently turn into the add-on available in Google Doc’s add-on store today.”The MindMeister add-on was built using Google App Script, Google’s Java Script engine in the cloud, and HTML Service, which enables the serving of web pages that can interact with server-side Apps Script functions. The add-on is free and doesn’t require a MindMeister account. Inside a Google document, users can discover it via the new add-on store, and get it with only a few clicks.“The MindMeister add-on is a neat little app that turns any bullet point list created in the Google document into a visually appealing MindMeister mind map,” Till Vollmer explains. “All the user has to do is select the list and choose the command ‘Insert as Mind Map’ from the add-ons menu. The map that is generated adopts the exact hierarchical structure used in the bullet point list. It appears in the document within a few seconds, after which the user can modify its size, position and other features.”About MindMeisterMeisterLabs develops and provides web-based productivity tools focusing on simplicity, usability and easy collaboration. Its flagship product MindMeister is the market-leading web-based mind mapping and brainstorming solution. Over 300 million ideas have been generated by individuals and businesses using its unique, award-winning interface. As a cloud-based solution, MindMeister functions in any web browser and comes complete with native mobile applications for iPhone, iPad and Android.Raphaela Brandner Marketing Werner-Eckert-Strasse 12 81829 Munich Tel +49 (0)89 1213 5359 Fax +49 (0)89 1892 1347 press@mindmeister.com

03-16-2016 | IT, New Media & Software
MindMeister
MeisterTask Adds Seamless Access to Hundreds of Web-Services Via Zapier
MeisterTask today announced its integration with Zapier, the popular webapp-automation service which enables non-developers to connect apps via simple workflow automations called ‘Zaps’. Through the integration, MeisterTask users can now connect their project boards with more than 500 other web applications. “The Zapier integration opens a whole new world of possibilities for our users,” said MeisterLabs Managing Director, Till Vollmer. “A lot of our previous integrations were largely geared towards developers
12-19-2014 | IT, New Media & Software
MindMeister
MindMeister Brings Visual Collaboration to a Whole New Level
Munich, December 16, 2014: After creating the first collaborative online mind mapping app in 2007, MeisterLabs, the company behind MindMeister, today released a new feature for its popular online tool that promises to bring the collaborative experience to a completely new level. Just like in 2007, the developers of MindMeister got inspired by Google’s online text editor Google Docs, which enables users to collaboratively edit text in a document. MeisterLabs
07-02-2014 | IT, New Media & Software
MindMeister
MindMeister for Glass Enables Users to Insert Ideas Into Mind Maps While on the …
MindMeister, the market-leading online mind mapping solution, just released a Glassware adaptation of its popular Geistesblitz feature, making it possible for users to capture ideas with Google Glass and automatically send them to their MindMeister account. MindMeister for Glass is the latest in a long line of MindMeister integrations with Google products, such as Google Drive, Google Docs and Google Hangouts, among others. The Glassware is based on MindMeister’s popular Geistesblitz
01-23-2014 | IT, New Media & Software
MindMeister
MindMeister Releases Major Update of Mind Mapping App for Android
MindMeister, the market-leading web-based mind mapping and brainstorming solution, just released version 2.3 of its native Android app. Munich, January 22, 2014: Following the recent relaunch of MindMeister’s online solution, MeisterLabs, the company behind MindMeister, today released a major update for its native Android app. MindMeister for Android complements the cloud-based web app and allows users to mind map on the go, syncing their maps in real-time. The new version 2.3,

04-09-2021 | Tourism, Cars, Traffic
EpicVIN
EpicVIN's Google Chrome extension
A thorough vehicle history search is one of the best ways to ensure that a vehicle purchase is a good one. EpicVIN wants to help users make the process of locating this information even easier with its new Google Chrome extension. The extension can be added to any website on Google Chrome, offering potential buyers key information to help make purchasing decisions. EpicVIN it’s the world’s first blockchain based vehicle
11-02-2018 | IT, New Media & Software
Alina Digital Services
Arabic Google Fonts
Are you searching a for Arabic Google Fonts? Then you are the right place. Today i will give you 19 Best Free Arabic Google Fonts. I agree with you that most of the website you got information that How to use google fonts, how to embed fonts, but you not able to gather full information from one site. Here I will promise that you can gather complete information on Arabic Google Fonts from one
10-23-2018 | Advertising, Media Consulting, …
ESV Digital
Google Analytics Segments Vs Filters
London/UK – 23th October 2018. One of the most common questions I’m asked about Google Analytics is the difference between a segment and a filter and the main use case of each of them. I’m often asked why you would ever use a filter when a segment does the same job and vice versa. In today’s post, I’m going to briefly run you through what segments and filters are, how they
08-24-2017 | IT, New Media & Software
Radix FZC
Google buys business.site for Google My Business
Small enterprises now get free BUSINESSNAME.business.site domain absolutely free through Google My Business 24th August 2017, Mumbai: Radix, the domain registry that has the exclusive rights to operate new domain extension .SITE, today announced that it has sold the domain name business.site to Google. As part of Google My Business, small business owners are able to make a website with a BUSINESSNAME.business.site domain name for free. The service is available
08-29-2011 | IT, New Media & Software
Kingpin-SEO
Kingpin Excited to See What Google+ does for Google Realtime
According to recent research Google+ has apparently amassed 25 million users since its launch in late June, however the networking site is currently still in the invite only stages. Despite the lack of news regarding its public launch date, there are now rumours that Google will be using the social networking site in conjunction with the not long abandoned Google Realtime function. Realtime delivered relevant information from Twitter, Facebook, and other
06-08-2010 | IT, New Media & Software
MindMeister
MindMeister launches Google Wave gadget
MUNICH, GERMANY, JUNE 7, 2010 Leading mind mapping and collaborative working innovator MindMeister announced today the public beta launch of their Google Wave gadget. This addition of MindMeister to Google Wave will now give Wave users a number of features and functionality of MindMeister’s award winning interface within their new and existing Waves. Since it’s beta launch in October 2009, Google Wave has been facilitating communication and collaboration between millions
Comments about openPR
I can't but agree to the positive statements about your portal: easy to use, clear layout, very good search function, and quick editing!
Jens O'Brien, Borgmeier Media Communication