AIDS - around the world - medicalpicture Feature to World Aids Day on 1.December 2006 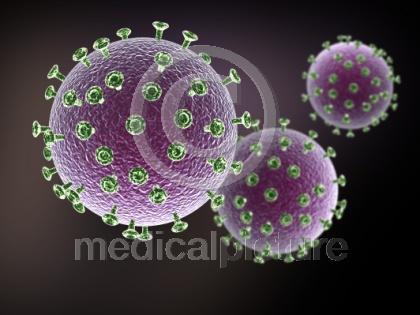 Aidsvirus in 3D Design, more images in the database

AIDS has killed more than 25 million people, making it one of the most destructive epidemics in recorded history. Despite recent, improved access to antiretroviral treatment and care in many regions of the world, the AIDS epidemic claimed an estimated 3.1 million (between 2.8 and 3.6 million) lives in 2005 of which, more than half a million (570,000) were children.Quicklink to Aids Feature with text and a lot of images at http://aids.medical-picture.comDefinition of Aids Acquired Immune Deficiency Syndrome (AIDS) is an infectious disease caused by the human immunodeficiency virus (HIV). The virus progressively destroys the immune system of the person infected.Worlds AIDS Day World AIDS Day, 1 December is an opportunity for people worldwide to unite in the fight against HIV and AIDS. This year, it's up to you, me and us to stop the spread of HIV and end prejudice.Weblinks http://www.medicalpicture.de http://aids.medical-picture.com http://register.medical-picture.comThomas Schmidt PR, Marketing E-Mail: schmidt@medicalpicture.de Telefon: 49-221-92053-580 Fax: 49-221-92053-133 Zuständigkeitsbereich: Presse, press relationsmedicalpicture Gmbh was founded in 2002 in Cologne, Germany and is a subsidiary of DocCheck AG, Cologne. The group is the leading cooperative in the healthcare market in Germany. medicalpicture operates the fastest growing, web-based image database with more than 100,000 images from the worlds of health, medicine, pharmacy and science - in addition to photos, high-quality, thematically detailed medical illustrations and microphotographs. The vast majority of image authors nationally and internationally are represented on an exclusive basis. In addition to syndicated image media, medicalpicture offers solutions and services for image databases, image management and image management for the industry.

You can edit or delete your press release AIDS - around the world - medicalpicture Feature to World Aids Day on 1.December 2006 here

05-28-2019 | Health & Medicine
Meetings International Pte Ltd
3rd Annual Summit on AIDS
We are delightful to welcome you to the “3rd Annual Summit on AIDS” which is going to be scheduled on September 16-17, 2019 at Singapore. This conference is a global platform for AIDS Disease Professionals where we assure you to have knowledge with scholars from around the world for the best current strategies for diagnosis and treatment of AIDS. AIDS 2019 is based on the theme of ENHANCING COMPETENCY IN
06-19-2017 | Health & Medicine
Transparency Market Research
AIDS-related Kaposi’s Sarcoma Market Report 2017
AIDS-related Kaposi’s sarcoma is a type of cancer affecting the cells lining, the blood vessels, or lymph nodes. The cancer usually occurs as tumors on skin or mucosal surfaces. It is characterized by brown, red, or purple tumors on the affected area generally called as lesions. The major factors playing the role in the pathogenesis of the cancer are Kaposi’s sarcoma herpes virus/human herpes virus type 8 (KSHV/HHV-8), altered responses
03-30-2017 | Health & Medicine
Persistence Market Research Pvt. Ltd
Global HIV-AIDS Testing Market
The HIV-AIDS Testing Market reportprovides in-depth analysis of parent market trends, macro-economic indicators and governing factors along with market attractiveness as per segments. The report also maps the qualitative impact of various market factors on market segments and geographies. HIV-AIDS is a chronic disease caused by the human immunodeficiency virus (HIV). HIV virus damages human immune system, which results weakness of immune system and loss ability to fight with organism that
09-13-2016 | Advertising, Media Consulting, …
Intense Research
Global Hearing Aids Market 2016: Digital hearing aids, Analog hearing aids
A hearing aid is an electronic device that amplifies the sound resulting in the production of clear sound for the user. These are largely deployed for people who suffer from hearing loss and impairment. The global Hearing aids market is gaining popularity owing to the rising technological innovations and increased demand for aesthetic designs of the devices. While the market is considered to be influenced by factors such as technological
03-07-2011 | Associations & Organizations
Bolivia Volunteers
BOLIVIA VOLUNTEERS aids flood victims.
In response to the severe flooding in the city, caused by the highest levels of torrential rainfall recorded for many years, BOLIVIA VOLUNTEERS has sent four of its volunteers currently in COCHABAMBA to help individuals, displaced families and the community. Liaising with community leaders, the volunteers are providing immediate emergency assistance in a variety of ways, to try to help ease the devastating impact the recent floods have had. Recent flash-floods
10-28-2009 | Health & Medicine
Advice on Hearing Aids
All Hearing Aids, All Here
The struggle to research hearing aids is now as easy as a point and a click. Featuring unbiased information in an easy to understand format, AdviceOnHearingAids.com is an educational forum designed to help those with hearing loss find the best aid for their unique challenges. Audiologist owned and operated, AdviceOnHearingAids features information about the latest in hearing aid technology. "The hearing aid industry has its own language, and that can
Comments about openPR
Your portal is fast, simple, and easy to use. Others may have more functions but they also demand more editing time, you have to preformat the text in order to achieve a good result etc. I think openPR is really fantastic!
Andreas Knepper, wallmedien AG