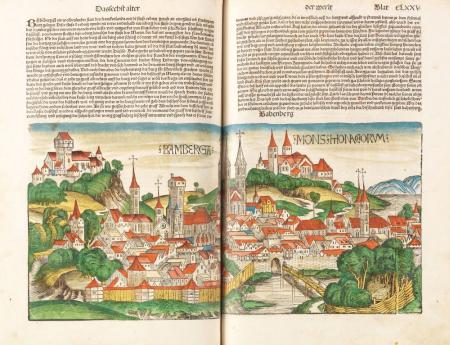 Hamburg, 24 October 2018 (kk) – They were created by grand masters: the books, manuscripts, prints and miniatures that will be called up in the auction of Rare Books at Ketterer Kunst in Hamburg on 26 November. Here is a small preview of the precious gems:HISTORICALLY unique is what accounts for the ‘Buch der Chroniken und Geschichten’: The first German edition of the “World Chronic” by Hartmann Schedel, made in Nuremberg in 1493, is one of the most richly illustrated incunabula of all. The well-preserved copy in old coloring and a 16th century pigskin binding is the auction’s top lot and will be called up with an estimate of € 120,000.HOURLY, was the intended usage rate of the splendidly colored Latin and French Book of Hours manuscript that was made at Troyes around 1470. The marvelously illuminated parchment script is particularly captivating for its 15 full-page miniatures, it has been estimated at € 25,000. Additionally, another Book of Hours for the use in Amies, made in Rouen around 1510, and with fine miniatures by Robert Boyvin will also be called up. The beautifully illuminated parchment manuscript in a splendid Parisian Renaissance binding à la fanfare from the studio of the so-called Sorbonne-Master has been estimated at € 50,000. PARADISICAL, that's what can be said about the illustrations in George Edward's “Histoire naturelle d‘oiseaux peu communs“. This complete series of the acclaimed ornithological and zoological work is the first French edition and has an estimate price of € 20,000. At the same time it is the first edition containing the Gleanure/Gleanings with parallel text in English and French. The fine coppers show beautiful illustrations of birds and other animals, among them many images of parrots and birds of paradise. LEGALLY correct and extremely rare is what is true for the compilation of Spanish laws and decrees from 1503 by Juan Ramirez, secretary of the Spanish king (estimate: € 20,000). It also comprises the important decree informing legal officers of the Spanish Empire that Christopher Columbus may take murderers and other delinquents with him to the New World, so that they can serve their sentence in form of unpaid labor for the purpose of colonization.A CHRISTMAS MOOD comes up with the two-page note leaf with the first 20 beats of “Christnacht“, a composition for soloists, choirs and big orchestras by Hugo Wolf. The autographed manuscript by the early deceased composer will be called up with an estimate of € 15,000.MANIFOLD and a one-of-a-kind work is this well-preserved and rare graphic edition with contributions from 17 artists of the Freie Berliner Secession from 1921. The portfolio comprises signed original lithographs by artists such as Erich Heckel, Max Liebermann, Hermann Max Pechstein, Käthe Kollwitz and Karl Schmidt-Rottluff. It will be available for an estimate of € 14,000.POETICAL and at the same time pictorial is what's true about the autographed manuscript of poems by Hermann Hesse. His “Zwölf Gedichte” from 1929 are illustrated with 14 intensive watercolors and is a document of the wide range of talents of the painting poet. They will enter the race with an estimate of € 12,000.LUXURY is what the portfolio “Eine Nachlese” by Max Eisler emanates. The fine copy of this splendid and lavishly printed Viennese portfolio is a noble overview of Gustav Klimt's works. The first of 170 numbered copies of the German edition from 1931 is a wonderful contemporary document of the Austrian artist's creation. The estimate price is at € 10,000.FINALLY, the range of offerings is completed by, among others, Nikodim P. Kondakow’s “Geschichte und Denkmäler des Byzanti-nischen Emails” (estimate: € 7,000), one of the most impressive French botanical works of its days by Nicolas Francçois Regnault (estimate: € 10,000) and by “Moise et le monothéisme“, Salvador Dalí‘s extremely elaborate homage to Sigmund Freud (estimate: € 15,000).Preview: Wed – Fri, November 14-16, 11am-5pm Mon – Fri, November 19-23, 11am-5pm Sunday, November 25, by appointmentAuction:November 26, beginning at 11am at Ketterer Kunst, Holstenwall 5, 20355 HamburgThe family company Ketterer Kunst (www.kettererkunst.com and www.ketterer-internet-auctions.com), with headquarters in Munich and branches in Hamburg, Duesseldorf, Berlin and the USA, was founded in 1954. It is one of the leading European houses for auctions of Fine Art from the 19th to the 21st Century and Rare Books. The 2018 art market review, compiled by artprice.com, ranks Ketterer Kunst on place 19 in the TOP 100 Fine Art Auction Houses worldwide. The auctioneer's clientele predominantly consists of international collectors, art dealers, curators and museums.Your Media Contact: Ketterer Kunst Joseph-Wild-Str. 18 81829 München Michaela Derra Phone: +49-(0)89-55244-152 Fax: +49-(0)89-55244-177 E-Mail: m.derra@kettererkunst.de Your Contact in the Rare Books Department:Ketterer Kunst Holstenwall 5 20355 Hamburg Christoph Calaminus Phone: +49-(0)40-374961-11 Fax: +49-(0)40-374961-66 E-Mail: infohamburg@kettererkunst.de

You can edit or delete your press release Auction of Rare Books, Manuscripts, Autographs, Decorative Prints in Germany - MASTERLY here