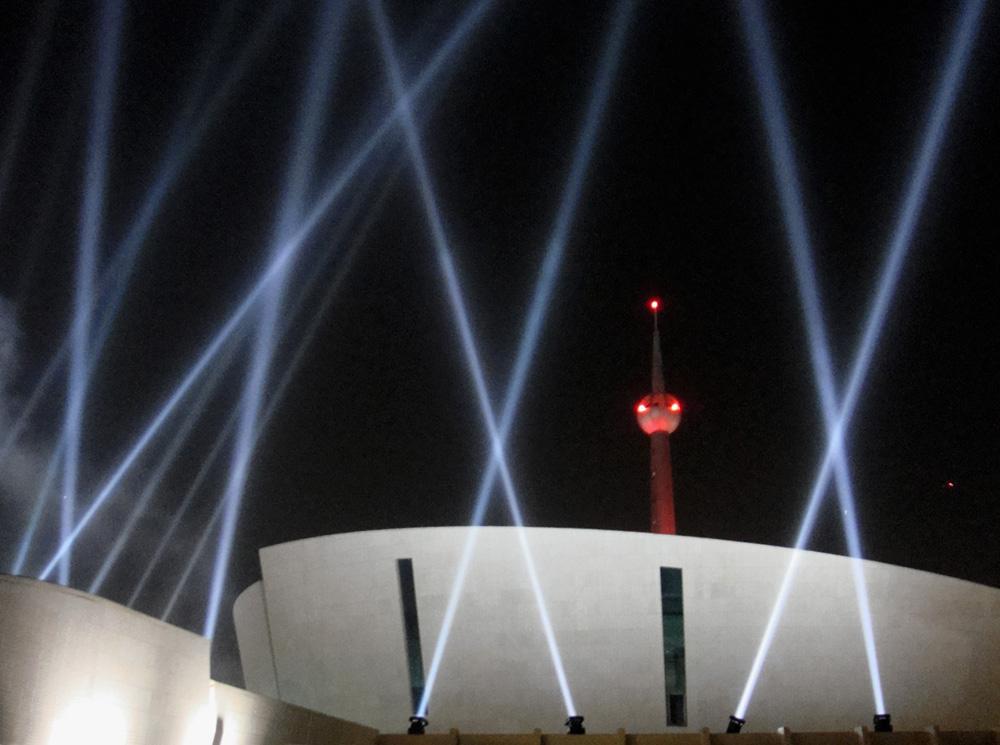 In Sakhir, Bahrain the Bahrain National Charter Monument was inaugurated at a Royal ceremony marking the anniversary of the National Action Charter on 14 February. This significant occasion took place on the museum site which is set up in an amphitheatre style. Pico International (Bahrain) was responsible for the event concept, design, implementation and show production including the multimedia and lighting design, which marked the celebratory opening ceremony of one of the largest cultural monument of the region. For the event, which was designed to reveal the gift of the King to the people of Bahrain, A&O Technology Middle East in total supplied 14 FALCON BEAM colour 7000W. The FALCON Xenon Searchlights, manufactured by German company alpha one, were being placed on top of an impressive overhead crossing which encircles the museum from where they drew various pictures into the evening sky and highlight the unique architecture of the monument structure. The event program culminated in grand finale with a spectacular lighting display and brilliant aerial fireworks.His Majesty King Hamad Ibn Isa Al Khalifa graced the ceremony along with HRH The Prime Minister, Prince Khalifa bin Salman Al Khalifa and HRH Prince Salman bin Hamad Al Khalifa, Crowne Prince and Deputy Supreme Commander and other members of the Royal Family. Guests included Ministers, ambassadors and high ranking officials. The Bahrain National Charter Monument was opened as a cultural centre that includes an amphitheatre, a gallery and a museum and is dedicated to the new Constitution of 2001 which was passed after a majority vote of the population after which Bahrain returned to constitutional rule and became one of the most liberal countries in the gulf region. The Monument is of international and regional importance to the Kingdom of Bahrain and shall commemorate of the loyalty of the people of Bahrain to their King and country.A&O Lighting Technology GmbH, which was founded by Marco Niedermeier, has been actively engaged in the hiring and sale of show and architectural lighting equipment since 1995. A&O's diverse inventory includes special LED equipment and several hundred searchlights (high-power xenon floodlights) that can be used for well-known entertainment- and architectural lighting applications. It also has the exclusive worldwide distribution rights to a variety of architectural luminaries and searchlights, such as the FALCON® range from alpha one. A&O Lighting Technology, with its head office in Germany, is active worldwide with subsidiaries and offices in UAE, USA and UK. For more information, visit: www.ao-technology.comMarch 2010 A&O Lighting Technology GmbH, Industriestraße 31-33, 28876 Oyten, Germany, Telephone: 0 42 07 / 66 84-0, Internet www.ao-technology.com, Contact: Tanja Niedermeier

05-24-2018 | Business, Economy, Finances, B …
Orbis Research
Bahrain: Country Intelligence Report
"Bahrain: Country Intelligence Report", a new Country Intelligence Report by GlobalData, provides an executive-level overview of the telecommunications market in Bahrain today, with detailed forecasts of key indicators up to 2022. Published annually, the report provides detailed analysis of the near-term opportunities, competitive dynamics and evolution of demand by service type and technology/platform across the fixed telephony, broadband and mobile segments, as well as a review of key regulatory trends. Bahrain’s
12-15-2017 | Business, Economy, Finances, B …
WISEGUY RESEARCH CONSULTANTS PVT LTD
Bahrain Life Insurance Market 2017- Key trends, Drivers and Challenges for the B …
WiseGuyReports published new report, titled “Life Insurance in Bahrain, Key Trends and Opportunities”. Synopsis 'Life Insurance in Bahrain, Key Trends and Opportunities to 2020' report provides a detailed outlook by product category for the Bahraini life insurance segment, and a comparison of the Bahraini insurance industry with its regional counterparts. It provides key performance indicators such as written premium, incurred loss, loss ratio, commissions and expenses, total assets, total investment income and retentions
03-02-2017 | IT, New Media & Software
eZee Technoys Pvt. Ltd.
Bahrain Tourism Certifies eZee PMS
Every once in a while, each governing or tourism authority of a developing country takes its security, tourism and revenue aspects in their agenda and come out with anew rules and regulations. In that event, hospitality technology providers ought to update their systems, in a manner which can accommodate all such requirements from different countries and authorities. Additionally, hoteliers intend to choose a hotel software which can work in line
05-29-2012 | Business, Economy, Finances, B …
UAE Exchange
UAE Exchange Bahrain launches Smart Pay
Smart Pay, the leading payroll solution from UAE Exchange was launched in Bahrain. Smart Pay provides convenient payroll management and salary disbursal for organisations and easy salary collection for their employees, while complying with all labour laws of the Government. "Payroll management will now be a hassle-free process for organisations in Bahrain", said Mr. Promoth Manghat, VP - Global Operations, UAE Exchange. He was speaking on the occasion of the
10-11-2011 | Business, Economy, Finances, B …
Tajweez Advisory Co. WLL
Tajweez Bahrain Launches Islamic Finance 360ᵒ Trainings
Tajweez Advisory Co. WLL, the first Pakistani backed advisory firm in Bahrain in the niche Islamic Finance sector, has launched their Islamic Finance 360ᵒ training project at the prestigious Institute of Bankers Pakistan. The 3-Day intensive workshop titled ‘Islamic Product Structuring and Pricing: Tools and Techniques’ was conducted by a team of top-notch Shari’ah Scholars and technicians from October 7 till 9. The workshop was accredited and made available to members of
07-11-2011 | IT, New Media & Software
= http://www.adodis.com/Website-development-Bahrain.php
Web Development bahrain
A website can be treated as the face of the company in the virtual world of the internet if we talk specifically. It is a website that allows potential as well as existing customers to have a glance of the business and services of an organization offers. A great web design can work wonders as it is the only medium through which an organization can reach out to the world
Comments about openPR
OpenPR ist the nicest and most clearly laid out PR platform I have seen to this day. The press releases are displayed very nicely and clearly and without any unnecessary frills. The updates are fast and the finished release looks appealing and is clearly legible. Even with 16 years of experience one discovers new things from time to time. Congratulations!
Gabriele Ketterl, Director Marketing & PR, Menads