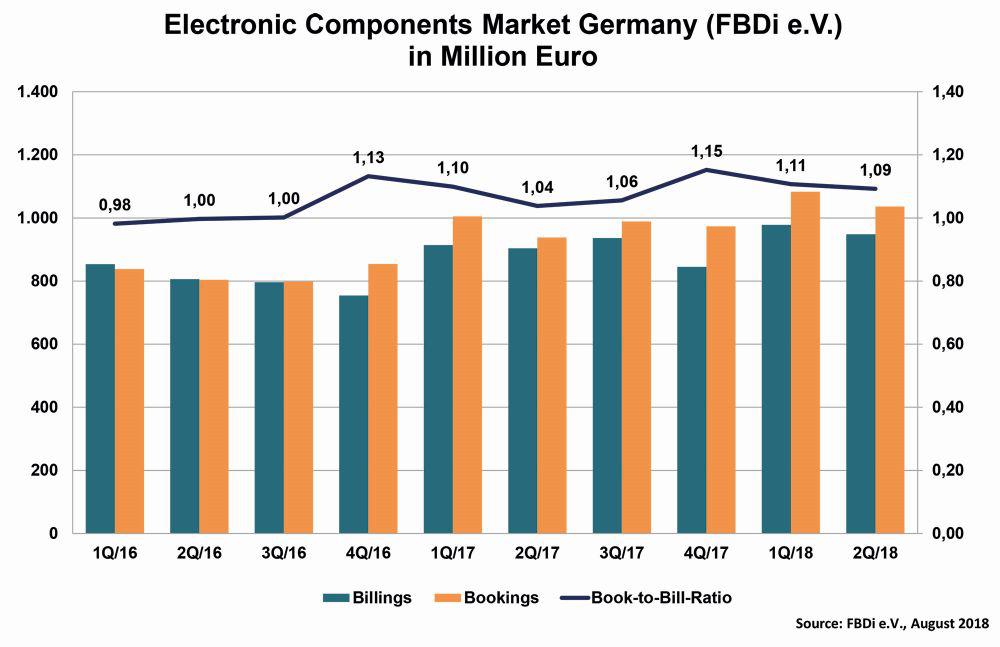 Berlin, 31 August 2018 – Stable but uninspired – this describes the German component distribution market during the second quarter 2018. Sales by companies registered with the Fachverband Bauelemente Distribution (FBDi e.V.) grew in the months April, May and June by 5% (compared with Q2/2017) to 949 million Euros. The order situation performed better, and with 1.04 billion Euros exceeded the billion Euro mark once again. With 1.09 the book-to-bill rate (order intake to revenue) remained on a high level. Broken down by technology the passive components grew strongest with 14.4% (reaching 137 million Euros), followed by electromechanics (7.7% growth to 100 million Euros) and semiconductors (2.8% to 654 million Euros). Power supplies recorded 13.7% growth to 27 million Euros, and displays lost 4.3% ending at 21 million Euros. Regarding the breakdown of sales there is slight changes: semiconductors 68.9%, passive components 14.4%, electromechanics 10.6%, power supplies 2.8% and others (sensors, displays, assemblies) 3.3%. Georg Steinberger, FBDi Chairman of the board: “The effect of postponed orders due to the poor supply situation continues during the second quarter. Since mid of 2016 the orders have grown substantially stronger than the revenue, but do not have a recognizably adverse effect on the revenue growth. All this indicates that either the backlog is growing or the cancellations have increased. This will be reflected in the overall year 2018, we expect a moderate growth in the one single-digit range at the best.” “The trade dispute does not seem to have a significant impact on the overall German economic growth so far. Somehow the high technology market, by and large, seems to be uninfluenced of the political situation. Endogenous factors such as missing production capacities and shortage play a more important role.”About FBDI e. V. (www.fbdi.de): The FBDi e.V. – Fachverband der Bauelemente Distribution e.V. (Professional Association of Component Distribution), founded in 2003, is well-established in the German association community and represents a large portion of distributors of electronic components with operations in Germany. In addition to the preparation and advancement of numerical data and statistics concerning the German distribution market for electronic components, work group engagement and reporting on important industry themes (amongst others, education, liability and rights, traceability, and environmental themes) form essential pillars of the association’s work. The FBDi is a member of the International Distribution of Electronics Association (IDEA)FBDi e.V., Nassauische Str. 65 A, 10717 Berlin; www.fbdi.de; a.falke@fbdi.deMedia contact: Agentur Lorenzoni GmbH, Public Relations, Landshuter Str. 29, 85435 Erding; ph: +49 8122 55917-0, Beate Lorenzoni-Felber, beate@lorenzoni.de

06-03-2019 | Politics, Law & Society
FBDi e.V. (Professional Association of Component Distribution)
FBDi Comment: Are we regulating ourselves to death?
Berlin, 7 May 2019 - Where do I begin and where do I end? And most importantly, with what objective in mind? In times of increasingly complex structures and integration in the face of an accelerating pace of change, these questions should be familiar to everyone! It often feels like we can no longer see the wood for the trees, as if we are losing sight of the big picture.
03-15-2019 | Associations & Organizations
FBDi e.V. (Professional Association of Component Distribution)
FBDi environmental news: Changes in the German ElektroG from May 1, 2019
Berlin, 6 March 2019 - In the course of European harmonization the German-based ‘Stiftung EAR’ will classify ‘passive’ devices, which only transport electricity, also as electrical or electronic device with effect from May 1, 2019 for Germany. This means that they then fall within the scope of application of ElektroG in Germany and, thus they must be registered and notified. FBDi association points out the deadline until May 1, 2019
02-25-2019 | IT, New Media & Software
FBDi e.V. (Professional Association of Component Distribution)
Passives drive the German component distribution market in Q4-2018 - Outlook 201 …
Berlin, 15 February 2019 – Unusually high sales growth of almost 10% in the last quarter of 2018 brought a conciliatory ending of the year for the German electronic component distribution market. Sales by distribution companies under the umbrella of the Fachverband Bauelemente-Distribution (FBDi e.V.) grew 9.8% to 928 million euros. Conversely, orders fell 4.2% to 933 million euros, equating to a balanced book-to-bill ratio of 1.01. The year 2018
09-18-2018 | Associations & Organizations
FBDi e.V. (Professional Association of Component Distribution)
FBDi environmental ticker: News regarding the German ElektroG 2018
Berlin, 5. September 2018 – FBDi association points out the new scope of application of ElektroG: Since August 15, 2018 the open scope of application includes only 6 categories which replace the previously 10 categories. All electric and electronic devices are now covered by the scope of application of ElektroG, unless they are excluded explicitly by a legal exception. The new six categories are: 1. Heat exchangers 2. Screens, monitors and devices which integrate

09-18-2018 | Health & Medicine
Euroscicon Ltd.
Euro Ophthalmology 2019
The 2nd European Congress on Ophthalmology going to be held amid March 21-22, 2018 at Amsterdam, The Netherlands, which unites a one of a kind and worldwide blend of substantial and medium pharmaceutical, biotech and symptomatic or diagnostic organizations, leading universities and clinical research companies making the meeting an ideal stage to share understanding, encourage coordinated efforts crosswise over industry and the scholarly community, and assess rising advancements over the
03-19-2018 | Health & Medicine
Conference Series LLC LTD
Euro Surgical Pathology 2018
Rome, Italy welcomes you all to share Medical Knowledge and Experience at our upcoming "14th International Conference on Surgical Pathology and Cancer Diagnosis, May 17-18, 2018. Some of the main sessions "to-be-covered" are • Surgical Pathology and Diagnosis • Cancer Pathology • Breast Pathology • Gynecologic Pathology • Gastrointestinal and Liver Pathology • Neuro Surgery and Pathology • Oral and Maxillofacial Pathology • Dermatopathology • Genitourinary Pathology • Cytopathology & many more! Holiday Inn Rome - Aurelia Via Aurelia Km 8,400 00163 Roma Italy
01-02-2017 | Health & Medicine
Euro Biotechnology
17th Euro Biotechnology Congress
Conference Series LLC extends its warm welcome to 17th Euro Biotechnology Congress during September 25-27, 2017 at Berlin, Germany with a theme “Novel Trends and Innovations in Biotechnology for Making Life Better”. Conference Series LLC through its Open Access Initiative is committed to make genuine and reliable contributions to the scientific community. Scope and Importance Euro Biotechnology Conference aims to bring together the Professors, Researchers, scientists, business giants, and technocrats to provide
06-30-2016 | Industry, Real Estate & Constr …
Euro Facade Tech
Euro Façade Tech Glazing Systems
Virtually any type of glazing system can be used with structural glass facades. Check out the options with Euro Façade Tech. FRAMED Framed systems support the glass continuously along two or four sides. There are many variations of framed systems, most of which fall into two general categories. Conventional unitized curtainwall systems are seldom used with structural glass facades. STICK Stick-built glass facades are a method of curtainwall construction where much of the fabrication
05-18-2016 | Tourism, Cars, Traffic
Traveltext Ltd
Traveltext's alternative Euro 2016
You don’t even have to be a sports fan to know that this summer, the England football team will be heading off to the latest major international tournament with the hopes of a nation resting on the shoulders of the likes of Wayne Rooney, Jamie Vardy and Dele Alli. The fact that the tournament has expanded this year to include no fewer than 24 nations means that the eyes of Europe
08-03-2011 | Business, Economy, Finances, B …
Euro Coin Exchange
Euro Coin Exchange Announces Director of New UK Office; Launches Euro-Coins-For- …
Atlanta, GA -- Euro Coin Exchange, the leading buyer of euro coins in the U.S., announced the appointment of Christian Rayner as Director of the company’s U.K. operations. The announcement accompanied the opening of the company’s new coin processing center in the Thames Valley, near London, serving customers throughout the U.K. Initially, the U.K. office will exchange euro coins and banknotes for pounds exclusively. Kenneth Mitteldorf, the founder of Euro Coin
Comments about openPR
I can't but agree to the positive statements about your portal: easy to use, clear layout, very good search function, and quick editing!
Jens O'Brien, Borgmeier Media Communication