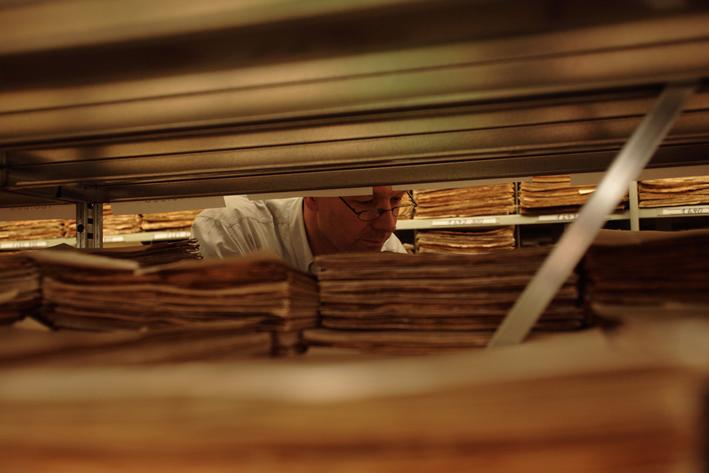 Around 60 million pages will be scanned.

The International Tracing Service (ITS) in Bad Arolsen has commenced work on the most elaborate sub-project involved in the digitalisation of its case correspondence. Around three million files of correspondence between the tracing service, public authorities and the victims of national socialist persecution as well as their family members are to be digitised over the next few years. “Together with the original documents from the Nazi era, the correspondence cases offer a concise account of individual fates,” said Udo Jost, Head of the Archive Division at ITS. “They take the puzzle pieces from the documents, which are often only fragmentary, and assemble them to an overall picture.”The correspondence files comprise enquiries, letters and witness reports from survivors of nazi persecution or from their family members. “Especially the correspondence from the immediate post-war period explains the different experiences from a very personal point of view,” said Jost. People turned to the tracing service to gain information on the existing documents or search for surviving family members. In many cases, they also required certificates for compensation and pension applications. “Around three million cases thus accumulated over the course of six decades. Each correspondence file holds an average of 20 pages,” explained Alexander Lommel, Head of the Digitisation Division.Up until now, the International Tracing Service has digitised around 84.5 million images and roughly 6.5 terabytes of data including documents on concentration camps, ghettos and prisons (ca. 18 million images), the ITS central name index (ca. 42 million images), registration cards of displaced persons (ca. 7 million images), documents concerning forced labour (ca. 13 million images), and files from DP camps and emigration after World War II (ca. 4.5 million images). Of the original documents still in need of digitisation are the files from the children’s tracing service as well as the so-called general documents.“We will respect the protection of personal data when releasing any correspondence cases,” promised Jost. “Enquiries that are less than 25 years old are only open to the victims themselves and their next of kin – not to researchers.” The digitisation of the correspondence files - referred to as T/D cases (tracing/documents, search/documents) - is done at eleven scanning workstations. It will take the ITS a few years to complete the entire project.About the International Tracing ServiceThe International Tracing Service (ITS) in Bad Arolsen serves the victims of Nazi persecution and their families by documenting their fate with the help of the archives it manages. ITS preserves these historic records and makes them available for research. ITS is presided over by the eleven states of its International Commission (Belgium, France, Germany, Greece, Israel, Italy, Luxemburg, The Netherlands, Poland, Great Britain, USA). Its legal basis is stipulated by the Bonn Agreements of 1955 and the amendment protocol from 2006. By order of the commission, ITS is directed by the International Committee of the Red Cross (ICRC). Further information on the International Tracing Service can be found on the web at www.its-arolsen.org.International Tracing Service (ITS) Grosse Allee 5-9 34454 Bad Arolsen Germany communications@its-arolsen.org 0049-5691-629116

08-29-2008 | Politics, Law & Society
ethority GmbH & Co. KG
Bad Grades for Barack Obama
ethority analyzed around 90,000 authentic user opinions found in forums, blogs and news sites concerning the two candidates running for president of the USA. German-, English- and Spanish-speaking contributions on the internet were evaluated and show that the democratic candidate Barack Obama has a greater buzz (percentage) compared to his republican competitor John McCain. However, in terms of sentiment, especially among German- and Spanish-speaking internet users, McCain and Obama are
05-29-2008 | IT, New Media & Software
ID Control BV
Password security often bad for environment
Amsterdam, 30 May 2008, ID Control BV, the specialist in advanced online identity and access management today announced her new longer lasting hardware One Time Password generating Token to fight online identity theft and fraud. With the ID Control OTP Key, a new one-time password (OTP) is issued every time a user remotely and securely wants to log into the protected remote access of networks, applications and digital resources. The user
02-27-2008 | Leisure, Entertainment, Miscel …
SkatMedia
Winner of Bad Fuessing Skat festival qualified
The days of the 11th to the 15th February was a week full of events for the participants of the 5th International Skat festival. The initiative of spa manager and mayor filled the big hall of Bad Fuessing with more than 150 activated Skat players for a competition over five days. The tournament was organized by www.skat-international.de under supervision of Hans Cordes and was one out of four possible Skat
04-26-2006 | Fashion, Lifestyle, Trends
HGTV
When bad designs happen to good people
CELEBRITY DESIGNER FRANK FONTANA RESCUES HOMEOWNERS FROM BAD TASTE ON HGTV'S TAKEOVER MY MAKEOVER New Half-Hour Series Premieres Saturday, May 6 @ 7 p.m. ET/PT LOS ANGELES, CALIF. (April 25, 2006) – When bad designs happen to good people, HGTV is there to turn things around in Takeover My Makeover, an entertaining new weekly series premiering Saturday, May 6 at 7 p.m. ET/PT. Takeover My Makeover features a rotating team of expert
12-30-2005 | Business, Economy, Finances, B …
jeepeebiz
Finding the Perfect Bad Credit Mortgage Company
If you have a bad credit score, then you need to choose the best bad credit mortgage company if you want to get a mortgage loan. Since a mortgage is a very large investment, you need to choose the best company. The most important factor to be considered is the interest rate. Thus you need to choose the bad credit mortgage company that provides you the most favorable rate of
12-12-2005 | Business, Economy, Finances, B …
Online Credit Pro
Bad Credit Loans and Sub Prime Lenders
What do you think if you home loan application is denied? The first thing you do is to retrieve is get hold of your credit report. I would suggest that you look into a tribureau credit report (which has reports from Experian, Equifax and Transunion) A tribureau credit report will have fewer discrepancies and have up to date information about your credit. Loan applications are rejected if we have
Comments about openPR
I can't but agree to the positive statements about your portal: easy to use, clear layout, very good search function, and quick editing!
Jens O'Brien, Borgmeier Media Communication