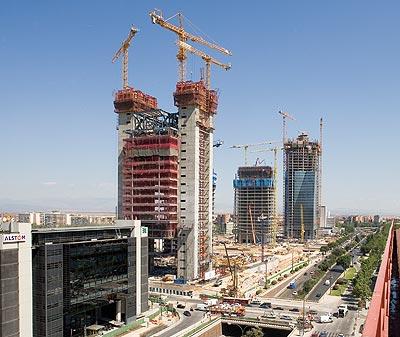 The Spanish skyscraper complex, Cuatro Torres, in August 2006: The Torre Repsol (left) and the Torre de Cristal (centre) have passed the 100-metre mark; the Torre Espacio (right), with over 150 metres, has already started the final phase.

Reaching for the sky: PERI ACS self-climbing formwork fulfils a wide range of requirements in weekly cycles With the so-called "Cuatro Torres”, currently under construction in the Spanish capital, Madrid, a superbly designed multi-storey complex is quickly taking shape. The development includes the Torre Espacio, the Torre de Cristal and the Torre Repsol. Apart from setting new records for Spanish building heights – Madrid's Barajas Airport had to modify its emergency flight paths due to the height of this project – these impressive towers captivate the imagination through various characteristic styles of architecture.The Weissenhorn-based formwork and scaffold manufacturer, PERI, offered the most cost-effective solution in each case on the basis of the ACS self-climbing formwork for a wide range of requirements. Being crane and weather-independent has meant operational speeds can be continuously maintained which ensures that maximum productivity is obtained throughout. PERI VARIO GT 24 girder wall formwork, along with many other PERI formwork and scaffold systems, supplement the formwork solution perfectly. Torre Espacio With over fifty floors, the Torre Espacio has an overall height of 223 metres. Around the three centrally-arranged cores, the initially square-shaped ground plan changes into an elliptical form. The 15 m x 10 m rectangular central core features varying wall thicknesses between 40 cm and 1.00 m, and is bordered by two U-shaped, 30 cm thick side cores. Although the 120 m² VARIO wall formwork is mounted on only a single PERI ACS G self-climbing unit (G = Gallows) for the two lateral cores, additional requirements had to be fulfilled for operations in the central core. With the PERI ACS P system (P = Platform), the contractors are able to simultaneously position 450 m² wall and slab formwork as well as the beam formwork in one climbing sequence. The central placing boom can also be climbed with the ACS P; a special steel construction ensures a safe transfer of loads via the ACS into the building.Torre de Cristal The 249 m high Torre de Cristal was the creation of the Argentine architect, César Antonio Pelli, who was responsible for the Petronas Towers in Malaysia. Built ten years ago, the then highest building in the world was erected also using PERI ACS self-climbing formwork. For the core of the Torre de Cristal, all three versions of the modular ACS system are being used – no problem here as the ACS R (R = Regular), ACS P (Platform) and ACS G (Gallows) can work in parallel ensuring optimal working procedures and, where required, can be efficiently and effectively combined. Altogether, 1,150 m² VARIO wall formwork, including the placing boom, have been distributed on ten individual climbing units. As the building increases in height, the wall thicknesses taper from 1.20 m to 70 cm. Special adapters ensure that these offsets can be climbed over without any problems. In the upper levels, the Cristal external facade has an increasing chamfer due to a continuous change in the ground plan at all four edges which gives the building the appearance of a polished crystal. The core also undergoes tapering in the ground plan over three floors. Adjusting to the variable geometry with the resulting inclined walls takes place using PERI ACS and VARIO GT 24 within the system itself.Torre Repsol With a height of exactly 250 metres, the Torre Repsol dominates the new multi-storey building complex in what will eventually become the highest building in Spain. Sir Norman Foster, the renowned English architect and Pritzker winner, has designed this structure with two externally positioned reinforced concrete cores. Each core contains seven elevators, stairs and service shaft. Between the two distinctive external columns, floor levels are arranged similar to that found in a shelf system. Three intermediate steel platforms carry eleven to twelve floors in each case. The VARIO GT 24 girder wall formwork and PERI ACS match the complex ground plan with wall thicknesses between 30 cm and 2.00 m perfectly. During the operational planning, PERI engineers also had to take into consideration the construction site crane which is positioned in the core. From the supporting frame for the placing boom up to the lowest suspended finishing platform for the special steel fittings, the ACS unit has an overall height of 25 metres in the area of the elevator shafts. By using the PERI climbing solution, the contractors are successfully maintaining the planned 4.70 m floor height weekly cycle for both cores.Tight schedule The completion of all buildings is planned for between May 2007 and the beginning of 2008. In order to be able to maintain this tight schedule, other PERI formwork systems in addition to the ACS and VARIO are being effectively used on this large-scale construction site. The lightweight aluminium PERI SKYDECK slab formwork with integrated drophead, for example, allows striking to take place in the shortest time possible. This means that girders and panels can be used for the next cycle only two days after concreting has taken place. The PERI UP Rosett modular scafold system has also been able to prove its versatility: as type tested falsework, designed for safe transfer of loads at large heights as well as for use as stair towers with alternating staircase units.Construction site detailsContractors: OHL Group, Madrid (Torre Espacio) Dragados (Torre de Cristal) ARGE Torre 1, FCC/Dragados (Torre Repsol)Field Service: PERI Spain (www.peri.es) and PERI Weissenhorn (www.peri.de)PERI GmbH Formwork and Shoring P.O. Box 1264 89259 Weissenhorn Tel.: +49/ 73 09/ 9 50-0 Fax: +49/ 73 09/ 9 51-0 www.peri.de info@peri.de Re-prints are free of charge quoting "Source: PERI GmbH". Please send a copy to the PERI Editorial Office. PERI Editorial Team Tel.: +49/ 73 09/ 9 50-1 18 Fax: +49/ 73 09/ 9 51-1 18 redaktion@peri.de www.peri.de/ww/en/pub/presse/oct_01_06.cfmPERI was founded in 1969 and is today one of the leading providers of formwork and scaffolding systems. Along with the headquarters in Weißenhorn, Germany, the company has 42 international subsidiaries and 70 stock yards around the world. The company has over 4.000 employees of which 700 are engineers (as of 2005). 2005 revenues were more than 760 million Euros.

01-28-2016 | Industry, Real Estate & Constr …
PERI GmbH - Formwork, Scaffolding, Engineering
Formwork and scaffolding from one source for Berlin´s City Palace
Sep 1, 2015 - "Humboldt Forum" City Palace, Berlin For the reconstruction of Berlin´s City Palace, PERI supplied cost-effective formwork and scaffolding solutions from one source. In addition to providing large quantities of wall, column and slab formwork with fast shuttering and moving times as well as flexibly used scaffolding materials, the on-site support provided by the PERI engineers ensured that all requirements could be fulfilled along with maintaining the tight
08-18-2015 | Industry, Real Estate & Constr …
PERI GmbH - Formwork, Scaffolding, Engineering
Construction time optimisation through comprehensive working safety and crane-in …
Aug 3, 2015 - International Towers Sydney ITS, Barangaroo South, Sydney, Australia The new LPS climbing protection panel from PERI provides comprehensive working safety and saves valuable crane time thanks to the mobile climbing hydraulics. This has accelerated construction progress on the International Towers Sydney complex on Australia's east coast. With the ambitious Barangaroo Redevelopment Project, Sydney's city centre is being redefined in a westward direction. On the 22-hectare former container port
07-02-2014 | Industry, Real Estate & Constr …
PERI GmbH - Formwork, Scaffolding, Engineering
System-based project solution saves time and money
July 1, 2014 - Capitol Hill Station, Seattle, USA The formwork and scaffolding solution provided for the construction of the new subway station in Seattle was the result of competent engineering and a project-specific construction kit system. In addition to the widest possible use of rentable PERI system components, the optimized construction method in particular ensured significant time and cost savings. The length of Seattle´s metropolitan railway system (Light Rail) is currently
06-20-2014 | Industry, Real Estate & Constr …
PERI GmbH - Formwork, Scaffolding, Engineering
Formwork in every shape and dimension – even faster with the new CNC system
June 16, 2014 - Visions of architects take shape with PERI Planned, formed, concreted – it is actually hard to believe that this procedure could ever function trouble-free in some cases of present-day abstract concrete structures. In its pursuit of uniqueness, architecture is becoming more and more ambitious. Parallel to this, the requirements of construction companies are likewise increasing. PERI, however, is keeping pace with this trend: with individual formwork solutions,