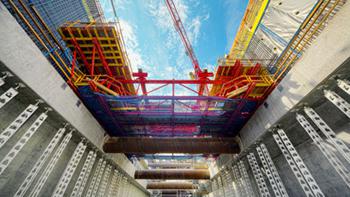 The VARIOKIT formwork carriage ensured rapid concreting sequences for the construction of the new subway station in Seattle.

July 1, 2014 - Capitol Hill Station, Seattle, USAThe formwork and scaffolding solution provided for the construction of the new subway station in Seattle was the result of competent engineering and a project-specific construction kit system. In addition to the widest possible use of rentable PERI system components, the optimized construction method in particular ensured significant time and cost savings.The length of Seattle´s metropolitan railway system (Light Rail) is currently being extended by 5 km and includes increasing the number of stations from 18 to 20 – as part of the rapid transit project for the Greater Seattle region. Capitol Hill, one of the two new subway stations is around 100 m long and is being realized at a depth of 18 m. Huge steel-composite tubes with 1.00 m and 1.50 m diameters respectively brace the underground structure on two levels.Engineering with systemA very experienced team of PERI engineers from PERI USA and PERI Germany developed a cost-effective solution for this project. Economical due to the fact that, on the one hand, the walls and reinforced concrete beams could be monolithically constructed, i.e. concreted in one pour, thus avoiding the need for construction joints as well as resulting in assembly cost savings. On the other, the PERI solution is largely based on the VARIOKIT engineering construction kit with rentable system components which are available at very short notice. For Turner Construction´s site management team this has meant tremendous time and cost savings for the realization of the ambitious building project.One formwork carriage for three tunnel levelsThe VARIOKIT formwork carriage construction for the nine deepest sections, each 12 m long and 8 m high, has been designed with two parts. As a result, it has also been possible to use the top half of the carriage for the remaining two levels after completion of the lower level. These were realized using 6 concreting cycles each time with heights of 5 m and 4 m respectively.The PERI formwork carriage is fully hydraulically operated, and moved along on the reinforced concrete edge beams of the respective lower level by means of heavy duty rollers. HD 200 heavy-duty props were used here as temporary supports for the edge beams in order to safely transfer the additional loads from the formwork carriage and the respective concreting cycle. Furthermore, the VARIOKIT unit served to support the huge steel tubes so that it was also possible to fill these with concrete at the same time as the walls were being concreted.In order to transfer the high loads resulting from the concreting operations for the 1.22 m thick reinforced concrete slab of the subway station into the longitudinal edge beams, the formwork carriage was adapted to suit the changed load situation. However, the VARIOKIT system components as well as the hydraulic handling and easy movability of the complete formwork carriage unit continued to be used.Comprehensive: system and detailed solutionsContributing positively to ensure the project was successfully realized was the fact that the PERI project team were also able to develop, in particular, detailed solutions for all stages of construction: for example, the design of the widened areas along the bottom level and the positioning of the steel tubes below a temporary bridge. Here, the VARIOKIT formwork carriage likewise served as a transport vehicle. In addition, the PERI systems TRIO, VARIO GT 24, SB Brace Frames, MULTIFLEX, MULTIPROP shoring towers and PERI UP stair access complemented the comprehensive project solution.VARIOKIT engineering construction kitWith standardized, rentable system components and site-compliant connecting means of the VARIOKIT engineering construction kit, bridge and tunnel structures can be cost-effectively realized and optimally adapted to suit the respective construction requirements. Furthermore, the modular design allows customized, load-optimized supporting formwork solutions for virtually all geometries.SeattleSeattle is the largest city in the north-west of the USA, and home to such well-known companies as Microsoft, Amazon, Boeing and Starbucks. For movie and television audiences, the city is known for films like "Sleepless in Seattle" or the TV series "Grey's Anatomy".PERI was founded in 1969 and is today one of the leading providers of formwork and scaffolding systems. Along with the headquarters in Weissenhorn, Germany, the company has more than 50 international subsidiaries and over 100 stock yards around the world. The company has over 6700 employees. 2013 revenues was 1,099 million Euros.PERI GmbH Editorial Office P.O. Box 1264 89259 Weissenhorn GermanyPhone: +49 (0) 7309.950-1191 Fax: +49 (0) 7309.951-1191 E-Mail: redaktion@peri.de Web: www.peri.comRe-prints are free of charge quoting "Source: PERI GmbH". Please send a copy to the PERI Editorial Office.

01-28-2016 | Industry, Real Estate & Constr …
PERI GmbH - Formwork, Scaffolding, Engineering
Formwork and scaffolding from one source for Berlin´s City Palace
Sep 1, 2015 - "Humboldt Forum" City Palace, Berlin For the reconstruction of Berlin´s City Palace, PERI supplied cost-effective formwork and scaffolding solutions from one source. In addition to providing large quantities of wall, column and slab formwork with fast shuttering and moving times as well as flexibly used scaffolding materials, the on-site support provided by the PERI engineers ensured that all requirements could be fulfilled along with maintaining the tight
08-18-2015 | Industry, Real Estate & Constr …
PERI GmbH - Formwork, Scaffolding, Engineering
Construction time optimisation through comprehensive working safety and crane-in …
Aug 3, 2015 - International Towers Sydney ITS, Barangaroo South, Sydney, Australia The new LPS climbing protection panel from PERI provides comprehensive working safety and saves valuable crane time thanks to the mobile climbing hydraulics. This has accelerated construction progress on the International Towers Sydney complex on Australia's east coast. With the ambitious Barangaroo Redevelopment Project, Sydney's city centre is being redefined in a westward direction. On the 22-hectare former container port
06-20-2014 | Industry, Real Estate & Constr …
PERI GmbH - Formwork, Scaffolding, Engineering
Formwork in every shape and dimension – even faster with the new CNC system
June 16, 2014 - Visions of architects take shape with PERI Planned, formed, concreted – it is actually hard to believe that this procedure could ever function trouble-free in some cases of present-day abstract concrete structures. In its pursuit of uniqueness, architecture is becoming more and more ambitious. Parallel to this, the requirements of construction companies are likewise increasing. PERI, however, is keeping pace with this trend: with individual formwork solutions,
06-06-2014 | Industry, Real Estate & Constr …
PERI GmbH - Formwork, Scaffolding, Engineering
Test of strength for PERI formwork and scaffolding
June 3, 2014 - Stanari Thermal Power Station, Doboj, Bosnia-Herzegovina he Energy Financing Team (EFT) is currently constructing the Stanari coal powered power plant near Doboj. For this project, the contractors have been tasked to realize a particularly large scale, massive structure whilst, at the same time, complying with small dimensional tolerances. PERI supplies two of the building contractors involved with a customized formwork and scaffolding solution. In addition to the