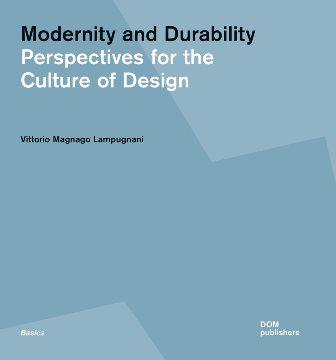 Perspectives for the Culture of DesignThe orthodox concept of the Modern, as it was passed down from the 1920s to the post-war era, has been in a state of crisis for quite some time. This is particularly visible in the fields of urban planning, architecture, and design. Theorists and practitioners have either fiercely defended it as a crowning historical achievement to be upheld and further cultivated, or dismissively rejected it as a short-lived and outdated episode that needs to be replaced with something different and new.In his book Modernity and Durability. Perspectives for the Culture of Design, Architectural theorist and practitioner Vittorio Magnago Lampugnani suggests a third option: that we reformulate our understanding of the Modern, continuing to pursue its original social and humanist ambitions while radically re-examining its ideological, political, social, technical, functional, economic, ecological, and aesthetic assumptions. Our world, which continues to be shaken by dreadful wars, is also being sapped and polluted by our thoughtlessness and our greed. The capitalist compulsion to turn everything into a commodity has led to needless production and consumption, and we are both victims and accomplices of this predicament. The consumerist frenzy has brought completely new forms of exploitation and exacerbated the unjust inequalities between different parts of our world. Starting from these premises, the author puts forward a new design approach that strives for – and is defined by – durability. This is an approach that rejects the frivolous waste of resources and superficial proliferation of images that have become commonplace today. It offers an alternative to the contemporary fixation on spectacles, both hollow and dangerous, and instead calls for measured restraint and substantial simplicity.Vittorio Magnago Lampugnani Modernity and Durability Perspectives for the Culture of Design 210 x 230 mm, 112 pages 15 pictures, softcover ISBN 978-3-86922-700-9 (english) € 28,00 July 2018. DOM publishers, Berlingisela graf communications supports publishers, museums and institutions specialising in architecture, design or art, with professional press and PR work, also on an international level. Communications — Individual concepts and texts for media relations Connections — Media contacts, interview arrangements, events — anything that brings people and subjects together Corrections — Editing and copy editing of texts and specialised publications, catalogues and brochuresgisela graf communications Gisela Graf Schillerstr. 20 D 79102 Freiburg T +49 761 791 99 09 F +49 761 791 99 08 contact@gisela-graf.com www.gisela-graf.com

01-30-2017 | Business, Economy, Finances, B …
Roderick Allan
Modern Furniture | Roderick Allan
This Furniture Company is Changing the Way That Homeowners Choose Furniture and Home Décor A Vancouver-based business offers beautiful furnishings with innovative designs for any space in the home. VANCOUVER, BC, Canada [January, 30, 2017] – Vancouver is home to numerous businesses and startups, but it’s a furniture business that is helping bridge the gap between tradition and modern online shopping. This business is Roderick Allan, co-founded by Vanessa Pratt, who built
01-11-2017 | Fashion, Lifestyle, Trends
Interparfums Paris
MODERN PRINCESS LANVIN NEW LAUNCH
THE INSPIRATION With this new fragrance, Lanvin explores a new, highly contemporary vision of a woman: one who lives in mysterious ways, one who accepts the hidden, unmentionable facet of her actions, a rebellious adventurer. Free-spirited, she lives the life of a disarmingly modern princess, of one who breaks rules in general, and rules of romance in particular. Glamorous, untamed and fiercely sensual, she uses her own free will, playing with
09-28-2016 | Associations & Organizations
Cygrus
Modern procurement platform Online-Cygrus
Blue Prism Networks, Bangalore has launched its prestigious website www.cygrus.com, the world’s best procurement platform for business. Cygrus will interface with millions of customers, sellers and products around the globe, all in one place. Built on the latest technology, customers will now find it 10x times faster and accurate to source their products. Organizing and access of procurement data such as products, enquiries, quotations, orders, and payments will be a
07-16-2011 | Business, Economy, Finances, B …
Modern furniture by TOSH Furniture
Modern furniture by TOSH Furniture
Los Angeles, CA, July 15, 2011 - Furnishing is a very important part of decorating any house and as a result, it has evolved into the latest trend setting element in the modern market. TOSH furniture has emerged into the prime scene and now they are considered to be one of the leading furniture selling companies. The company has recently launched a new set of modern furniture which is designed
03-07-2011 | Business, Economy, Finances, B …
Modern TV stands from Furnitech
Modern TV stands from Furnitech
Los Angeles, USA, March 5, 2011 - With every passing day, the electronics market is evolving, and is giving rise to newer models. Same is the case with one of the most sought after gadgets of recent times – the television. The old fashioned TV’s are almost out of the market, giving way to the all new models and the new technologies including LCDs and Plasmas. Not only the pictures
12-22-2010 | Business, Economy, Finances, B …
MODERN FURNITURE WAREHOUSE OFFERS THEIR LATEST RANGE OF MODERN FURNITURES
MODERN FURNITURE WAREHOUSE OFFERS THEIR LATEST RANGE OF MODERN FURNITURES
Los Angeles, USA, December 22, 2010 - Even a few years back, people used to be hopelessly less concerned about the furnitures that they used in their house. All they cared about was the paint on the walls, the sofas, and other things. But what they failed to realize was that no matter how beautiful the paint is, and how beautiful the house looks from outside, a house cannot have
Comments about openPR
We publish our press releases on openPR.de because we like people who are "open" - just like us.
Frank Obels, CEO, INCONET - Informationssysteme, Communication und Netzwerkberatung GmbH