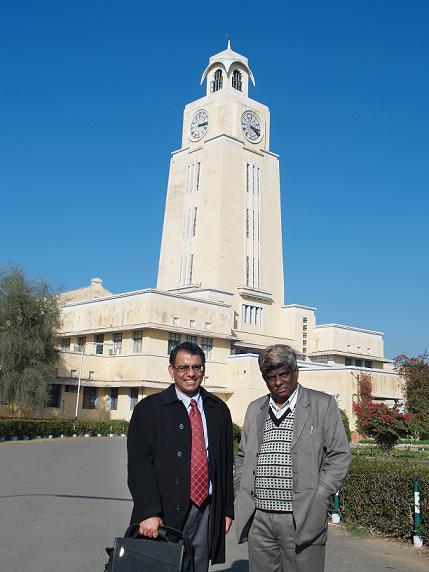 While alumni of many institutions bask in the glory of their alma mater, like a true BITSian, Rajiv Gupta who graduated from BITS Pilani believes in adding glory to his alma mater by his career achievements.Rajiv Gupta is presently Director Ultra High Resolution Volume CT Laboratory, Department of Radiology, Massachusetts General Hospital (MGH), Harvard Medical School, Boston, USA. He obtained his MS and PhD from State University of New York during 1982 to 1987. After spending a year at University of South California, Rajiv spent the next ten years as a computer scientist at GE Global Research Centre at Niskayuna. His burning desire to conquer the field of medicine drove him to Cornell University where he became a student during 1997 to 2001 and obtained his MD. Rajiv has over a dozen patents to his credit and has won many laurels which include several awards from GE and Radiological Society of North America (RSNA) as well as the coveted Stanley Wyman award. Members of every major religion undertake pilgrimages and for the alumni of Birla Institute of Technology and Science - BITS Pilani which is one among the top ranking universities in India today visiting their alma mater years after their graduation, is indeed a pilgrimage and a mission with passion. He is on a visit to India under DIT/MCIT SMDP-II project as an invited International Guest Faculty to deliver lectures at IIT Kharagpur, IIT and AIIMS Delhi, IIT Bombay, CEERI Pilani etc. From his hectic schedule he chose 11th January 2010 to visit his alma mater BITS Pilani Rajasthan where he was a student during 1976 – 1982 and obtained his MSc (Hons) Physics with a coveted dual degree B.E. (Hons) Electrical & Electronics Engineering.Coming after many many years, one could see the nostalgia all over when he went around the Institute and visited the new Library building, Lecture Theatre Complex, Computer Centre, Workshop, Oyster Lab, Auditorium, Animal House, Green House, Saraswati Temple, Students Activity Centre, FoodKing Sarath Babu Restaurant, Akshay, Shiv Ganga Market, etc. Accompanied by Prof BR Natarajan Vice President BITS Alumni Association (BITSAA), Dr Rajiv Gupta also had extensive interactions with Prof RK Mittal Deputy Director Administration and President BITSAA.Delivering a specialized talk to the faculty and students of BITS Pilani on the topic “Broad Perspective on Medical Imaging and its Challenges”, Dr Rajiv Gupta pointed out that with radiology costs in the United States growing to more than $100 billion annually, diagnostic imaging constituted one of the largest and fastest growing expenses for health plans racing with pharmaceuticals. When one realizes that radiology is only 10% of the healthcare budget and healthcare constitutes 15% of GNP, the significance becomes more obvious. Since unmanaged radiology spending is expected to continue growing at a rate of 20% annually due to various factors, the increasing clinical utility of newer studies such as Computed Tomography (CT) and Magnetic Resonance Imaging (MRI), coupled with the greater availability of and capacity to perform these studies, is bound to result in a dramatic increase in their use over the past several decades. The increasing demand for these and other new imaging techniques is not surprising in light of the rapidly advancing clinical uses for these techniques along with changes in practice patterns, patient complexity, and societal expectations. Dr Rajiv Gupta got a well deserved tsunami of applause from the audience, when he minced no words in thanking the broad based integrated and interdisciplinary education he received at BITS Pilani for achieving his career goals and urged the students to make best use of the opportunities and flexibilities offered by the BITS System of education. Prof LK Maheshwari Vice Chancellor BITS Pilani welcomed Rajiv with a colourful bouquet and Prof Surekha Bhanot Chief of Instrumentation Unit proposed the vote of thanks. For Proud to be BITSian Physicist to Physician Dr Rajiv Gupta, his alma mater BITS Pilani is indeed close to his heart.About BITS Pilani: The Birla Institute of Technology and Science - BITS Pilani is a Deemed to be University established vide Sec.3 of the UGC Act, 1956. NAAC - National Assessment and Accreditation Council reaccredited BITS with 3.71 CGPA out of 4 and awarded "A" grade "Very Good" status. It is indeed a matter of pride that for the year 2009, BITS Pilani has been ranked among the top ranking universities along with IITs in various Magazine surveys such as India Today, Outlook, LiveMint, Dataquest etc. BITS offers degrees in various disciplines presently at Pilani, Dubai, Goa and Hyderabad campuses. Admissions to BITS is done by the online exam BITSAT. BITS Pilani has done pioneering work in industry university collaborations in terms of Practice School and Work Integrated Learning Programmes. The alumni of the Institute peaking with Passion Quotient for Alma mater and spread across the globe from Australia to America are indeed the ambassadors of Brand BITS Pilani.Dr BR Natarajan Professor & Vice President BITS Alumni Association BITS Pilani Rajasthan 333031 India Phone 91-1596-242210 Fax 91-1596-244183 Email brnt(at)bits-pilani.ac.in Website http://www.bits-pilani.ac.in