Raking in the moolah through moon mining 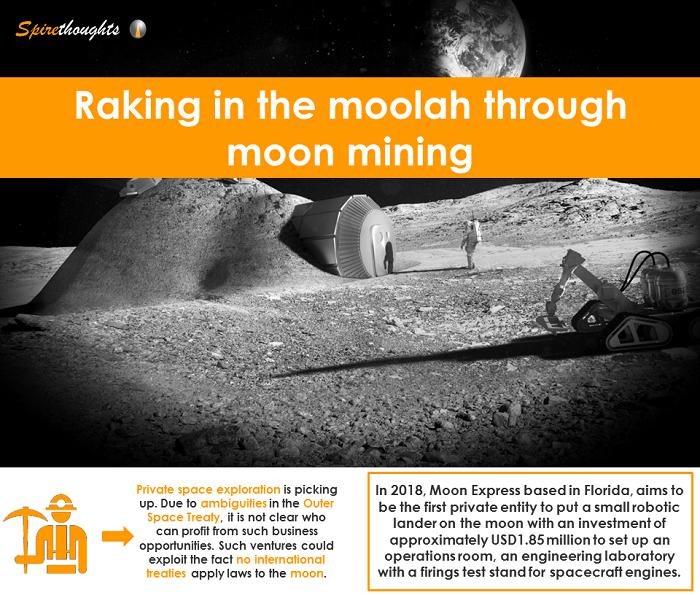 Does anyone own the moon? Or other planets for that matter? The prospect of mining on the moon and other celestial bodies is fast becoming a reality.In 2018, Moon Express, based in Florida, aims to be the first private entity to put a small robotic lander on the moon with an investment of approximately USD1.85 million to set up an operations room and an engineering laboratory with a firings test stand for spacecraft engines.Private space exploration is picking up. Due to ambiguities in the Outer Space Treaty, it is not clear who can profit from such business opportunities. Such ventures could exploit the fact that no international treaties apply laws to the moon.Will governments allow private space exploration and the mining of moons and planets?Find out more here: https://www.spireresearch.com/newsroom/spirethoughts/raking-in-the-moolah-through-moon-mining/Spire Research and Consulting was established in 2000 to address a gap in the research and consulting industry in global emerging markets. Unlike most agencies that focus on traditional consumer research, our founders saw a profound need for holistic research projects.Unit 501-502, DLF City Court, DLF Phase III, Sector 24, Gurugram – 122002, India Telephone: (91) 124 421 6144 Fax: (91) 124 422 1934 E-mail: india.info@spireresearch.com

02-14-2020 | Advertising, Media Consulting, …
spire research and consulting
Spire speaks on Cloud computing and IoT at the GATES Indonesia ICT Channel Summi …
Spire was honored to participate in the GATES Indonesia ICT Channel Summit, 2019 as Research Partner. The Summit was held on 18-20 June, in Bali. Albertus Edy Rianto, Senior Manager and Astri Welmien Tompodung, Senior Consultant, Spire Indonesia, shared their insights on the rise of Cloud computing and the internet of things (IoT) in Indonesia's business landscape. The speakers discussed how, through the continued technological advancement, ICT is becoming a general
01-10-2020 | Business, Economy, Finances, B …
Spire Research and Consulting
Will compost turn out to be the magic mineral for African agriculture?
Introducing phosphorous back in African soil is important as it helps plants in early life to build root systems. 80 per cent of phosphate reserves are controlled by five countries. Morocco has 75 per cent of the global reserves. After an 800 per cent price hike in 2008, phosphate rock has become costly. An alternative option is compost. Compost not only provides phosphorous and other nutrients but can also restore the soil
07-22-2019 | Business, Economy, Finances, B …
Spire Research and Consulting
Digital banking in Singapore
What will be the impact of digital banks in Singapore? Leon Perera, Chief Executive Officer of Spire Research and Consulting, shared his insights in Business Times – Singapore. More and more countries worldwide are issuing full bank licenses to digital-only banks. The competition from digital banks is being seen as a favorable development for the consumer. Digital banks with fewer physical branches and Automated Teller Machines to maintain could incur lower costs
07-12-2019 | Business, Economy, Finances, B …
Spire Research and Consulting
Spire talks about political risks facing business in ASEAN
On 25th April, Spire, Yamada Consulting Group (YCG) and SPEEDA jointly organized a breakfast seminar in Singapore to share insights about the political risks that businesses face in ASEAN in a year of multiple elections. The panelists were Leon Perera, Chief Executive Officer of Spire Research and Consulting, MS. Khor YU Leng, Research Director, Southeast Asia Segi Enam Advisors Pte. Ltd and Mr. Takashi Kawabata, Lead Asia Economist, Uzabase Asia

07-12-2016 | IT, New Media & Software
Moon Technolabs
Moon Technolabs Pvt Ltd Celebrates 7th Anniversary
Moon Technolabs Pvt Ltd has achieved a point of reference this July, praising 7 years of business. The organization has developed from the fantasies of originator/CEO, Jayanti Katariya, to an organization with areas in noteworthy Swift Language, eCommerce, Taxi app, Kids game and latest trends of App development 2015-16. To observe, they welcomed representatives, clients, and business accomplices to the organization's office. He strongly believes in 5 C’s:- 1.
05-24-2012 | Business, Economy, Finances, B …
BIZ COM
Frederique Constant Moon Timer
INSPIRED BY THE MOON Who doesn't enjoy gazing up at the moon from time to time? We have all stood outside on a cloudless night, and looked up to a clear sky, dotted with stars. Of course the object that stands out most is the moon. Since the dawn of man, the moon has been the centerpiece of numerous reactions and beliefs. Religions, scientific theories, superstitions, and political agendas have been
01-03-2011 | Fashion, Lifestyle, Trends
Explore Modeling
South Moon Under Nationwide Casting Call
South Moon Under is proud to announce their partnership with ExploreModeling.com in the effort to discover new talent for their upcoming New York City photo shoot scheduled for Spring 2011. This free nationwide online-based casting call will start on Monday, December 6, 2010, and will continue through the end of February 2011. The casting call is open to females and males, aged 16 and above. Each contestant is required to submit
12-30-2010 | Tourism, Cars, Traffic
Avalon Travel Publishing
Moon Tahiti from Avalon Travel
Berkeley, CA -- Avalon Travel Publishing has launched the 7th edition of Moon Tahiti by David Stanley. Since 1989, Moon Tahiti has been the leading travel guidebook to French Polynesia and this new edition incorporates the latest restaurant, resort, and transportation news. Stanley has been covering the South Pacific for over three decades and he knows the region better than any other travel writer. Packed into Moon Tahiti’s 353 indexed pages
11-19-2008 | Leisure, Entertainment, Miscel …
Chavis Records
Seventh Rize Set To Release 'Full Moon'
SEVENTH RIZE has signed on with CHAVIS RECORDS for the release of 'FULL MOON'. 'FULL MOON' is produced by Bobby Rock (Nelson, Vinnie Vincent Invasion, Hardline), with songs co-written with Bruce Turgon (Foreigner, Places Of Power). SEVENTH RIZE hails from Texas and is comprised of Stacy Humphries-vocals, Sulli-drums, Jerry Stone-guitars, and David Hamilton-bass. 'FULL MOON' is set to be released in February 2009. SEVENTH RIZE performed live on VH1 in July at
04-29-2008 | Science & Education
W.I.S.E. Retail Solutions, Inc
Moon Dust Pens Ready for Lift Off
West Palm Beach, FL – April 28, 2008 – W.I.S.E. Retail Solutions, Inc., has announced today that their first shipment of Apollo 11 Moon Dust Pens™ Commemorative Collector’s Edition has landed safely on earth! This attractive high quality writing instrument was conceived to commemorate the upcoming 40th Anniversary of one of man’s most important achievements - the 1969 Apollo 11 moon landing. The unique pen showcases JSC-1A Lunar Simulant,
Comments about openPR
OpenPR is clearly structured and remains true to its principle of confining itself to the essential parts. OpenPR has proven to be a very good and reliable partner to our media agency: Within the shortest time the releases are online and go down well with the media representatives. The success of OpenPR is reflected in the steadily increasing number of press releases. It is good that OpenPR exists!
Ursula Koslik, Director Marketing & PR, F+W Hamburg