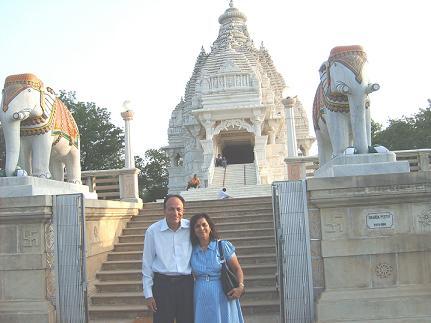 A Person's world is only as big as his Heart and there is no doubt that it is not he who has much is rich but he who gives much.Proud to be BITSian Ranvir Trehan is a technologist, an entrepreneur, and more recently a philanthropist in McLean, Virginia USA. Ranvir Trehan who graduated with a Bachelor of Engineering in Electrical Branch in 1961 from the erstwhile Birla Engineering College, Pilani, donated a whopping US$ 50,000 for the prestigious campus networking project BITS Connect commissioned in the year 2004 and as on date is the single biggest donor in the alumni history of the Institute. Ranvir had also done his intermediate during 1955 to 1957 at Pilani.After completing his engineering from Pilani, Mr. Trehan received his masters from the University of Michigan. He has published numerous research articles, and has taught graduate courses in engineering and operations research. He also holds MBA from the University of Dayton and had completed his Ph.D. coursework at George Washington University. He has been an invited speaker for many organizations including the Commission of the European Communities, National Academy of Sciences, and the Fall Joint Computer Conference.Crediting University of Michigan as the springboard for their good fortune, Ranvir and his wife Adarsh Trehan also have the reputation of having donated $1 million from the Trehan Foundation to their alma mater to encourage current and future collaborations between the University and India.The SETA Corporation in Washington DC which is a $100 million supplier of IT services to the US Government was founded by him. In USA his name figures as one of the 100 persons with most influence on Federal Technology strategy. Ranvir Trehan is a widely respected Internet and Telecommunications / Infrastructure Pioneer. He has also been Vice Chairman at Apptis Inc which acquired SETA. Ranvir Trehan is in the Board of Directors of CARE which is one of the world's largest private international humanitarian organizations, committed to helping families in poor communities improve their lives and achieve lasting victories over poverty. Founded in 1945 to provide relief to survivors of World War II, CARE is well known to be a trusted vehicle for the compassion and generosity of millions. Ranvir also serves on the Board of the Wolf Trap Foundation for the Performing Arts and is active in several charitable and cultural organizations.After 48 years of graduation from Pilani, Ranvir accompanied by his wife Adarsh visited his alma mater Birla Institute of Technology and Science - BITS Pilani on 08 November 2009. Prof N V Muralidhar Rao Dean Student Welfare Division took the Ranvir Trehan couple to various places in the campus which included the new Library building, Student Activities Centre (SAC), white marble Saraswati Temple etc. The Vice Chancellor hosted a tea party in the conference room of the VFAST Hostel where Ranvir interacted with various senior officers of BITS and a group of students on various aspects of campus life at Pilani. Ranvir nostalgically recollected the debating trophies won at Pilani including an encounter with Farooq Abdullah well known leader and politician from Jammu & Kashmir (J & K) who is also the present Union Minister for New and Renewable Energy. Prof RK Mittal President BITS Alumni Association (BITSAA) welcomed Ranvir with a bouquet and Vice Chancellor Prof LK Maheshwari presented Ranvir with a special memento for his generous contribution to put the BITS Connect project in place.In an exclusive interview with Dr BR Natarajan Vice President BITSAA, Ranvir clarified that he did not reach Pilani in 1955 riding a camel while some of his seniors are said to have done the same. Ranvir also emphasized that he got a merit scholarship at Pilani and not sports scholarship. One could see the twinkle in his eyes when Ranvir described how he and his friends during the student days at Pilani would take the train journey from the nearest Railway junction Loharu up and down just to watch movies at Delhi.Ranvir loves sports and BITSAA has instituted the Ranvir Trehan Tennis running trophy which is being given starting from the year 2006 to the Winner of the Tennis tournament at BITS Open Sports Meet (BOSM) as a token of thanks for his contribution to BITSConnect. Ranvir made it clear that being happy, be honorable as well as having a value system was the driving force in his life and not making money. Ranvir Trehan is indeed a man with a Big Heart who firmly believes that if one has a Passion, then he has a Mission to Contribute. Ranvir Trehan is undoubtedly a living example for many to emulate.About BITS Pilani: The Birla Institute of Technology and Science - BITS Pilani is a Deemed to be University established vide Sec.3 of the UGC Act, 1956 under notification No. F.12-23/63.U-2 of June 18, 1964. NAAC - National Assessment and Accreditation Council reaccredited BITS with 3.71 CGPA out of 4 and awarded “A” grade “Very Good” status. It is indeed a matter of pride that for the year 2009, BITS Pilani has been ranked among the top ranking universities along with IITs in various Magazine surveys such as India Today, Outlook, LiveMint etc. BITS offers degrees in various disciplines presently at Pilani, Dubai, Goa and Hyderabad campuses. BITS Pilani has done pioneering work in industry university collaborations in terms of Practice School and Work Integrated Learning Programmes. Alumni of the Institute who are Proud to be BITSians are spread across all continents from Australia to America.Dr BR Natarajan Professor & Vice President BITS Alumni Association BITS Pilani Rajasthan 333031 India Phone 91-596-242210 Fax 91-1596-244183 Email brnt(at)bits-pilani.ac.in Website: http://www.bits-pilani.ac.in

09-18-2007 | Sports
BITS Pilani
Scintillating Finish to BITS Pilani BOSM 2007
The 22nd All India Sports Meet organized by the students of Birla Institute of Technology and Science (BITS) Pilani BOSM (BITS Open Sports Meet) scheduled from 12-16 September 2007 had a participation of 770 students from 38 colleges across the country. For BITSians every BOSM is a passionate project which must be planned, funded, organized, conducted, controlled and completed in time to budget and performance specifications. Year after year they have
Comments about openPR
We publish our press releases on openPR.de because we like people who are "open" - just like us.
Frank Obels, CEO, INCONET - Informationssysteme, Communication und Netzwerkberatung GmbH