To Conceal & Carry or Not 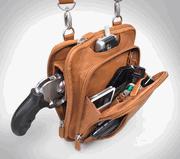 TO CONCEAL & CARRY OR NOT CONCEAL & CARRY….THAT IS THE QUESTIONWikipedia: Concealed carry or carrying a concealed weapon (CCW) is the practice of carrying a weapon (such as a handgun) in public in a concealed manner, either on one's person or in close proximity. Not all weapons that fall under CCW laws are lethal. For example, in Florida, carrying pepper spray in more than a specified volume (2 oz.) of chemical requires a CCW permit, whereas anyone may legally carry a smaller, “self-defense chemical spray” device hidden on their person without a CCW permit. As of 2017 there have been 16.3 million concealed weapon permits issued in the United States. There is no federal statutory law concerning the issuance of concealed-carry permits. All fifty states have passed laws allowing qualified individuals to carry certain concealed firearms in public, either without a permit or after obtaining a permit from a designated government authority at the state and/or local level; however, there are still many states that, though they have passed concealed carry permit laws, they do not issue permits or make it extremely difficult to obtain one.A comprehensive 2004 literature review by the National Academy of Sciences concluded that there was no evidence that concealed carry either increases or reduces violent crime; some individual studies suggest that CCW reduces violent crime; others suggest that it increases violent crime. Ok, now we have the definition of CCW but how do we FEEL about it and is it right for you?Statistics show that more men own & carry guns compared to their female counterparts but that could easily start to shift considering women have much more to worry about when it comes to their safety. Women are more likely to be targeted on the streets because we are considered less threatening. We also carry a purse which is much easier to grab than getting to a wallet that’s shoved into a guys’ pocket. So if you decide to carry, consider buying a cross body conceal and carry handbag. It is much more difficult to take from you which give you access to your weapon.When you hear a news story of a citizen that protected a person or a group of people because they were a “good guy” with a gun, when a “bad guy” was trying to inflict harm, how does that make you feel? I for one feel proud that we as a country are allowing us to adjust the odds. We don’t always need to feel we are at the mercy of a thug with a gun or left waiting for the police to respond…which can feel like a lifetime in those circumstances.Another thing to consider is where you live and work. Is it a high crime area? If so you might need to consider protecting yourself more than a stay at home mom that lives in a low crime area. Do you work late nights? Again, you might need more protection than someone that works in an office during the day.Do you need to carry a gun or is pepper spray or a stun gun all you really need to feel safer? Regardless of which device you decide on, you still need to feel comfortable using it and have easy access to it. Be aware of your surroundings so you aren’t caught off guard!Once you decide if carrying is right for you, find out what your local laws are. Do you need to take a required class (some states don’t require it), are you comfortable with your weapon, do you have a temperament that might make you more likely to engage in confrontation knowing you are armed?These are just a few things to consider before taking the leap. Even if your state doesn’t require you to take lessons, if you are not an avid gun user, I highly suggest taking lessons. The last thing you want is to be in a situation where you need to defend yourself and you don’t have the skills to do so.http://www.camochic.com #concealedcarry #guns #women #protectionCamochic provides a wide variety of conceal & carry handbags and if you are looking for something specific, just let us know and we will be happy to help you find it.Vault Event Media 7525 Forsyth Blvd. Clayton, MO 63105 314-261-4300 www.vaulteventmedia.com lisa@vaulteventmedia.com

06-18-2019 | Sports
CamoChic
Boating Safety
Whether you already have a boat or you are ready to buy your first boat (https://www.discoverboating.com/buying/affordable-boating), here are some things you need to know. Each year hundreds of lives are lost... thousands are injured... and millions of dollars of property damage occurs because of preventable recreational boating accidents on U.S. waterways. Too often pleasure outings turn tragic. You as a boat operator, passenger, or concerned individual can make a difference. (US
01-31-2019 | Sports
CamoChic
Tips to plan your Spring turkey hunt
Permit and Lottery Hunt Deadlines? Such details can easily be forgotten during your busy days deer and duck hunting. Spring's hunts are far from your mind but shouldn't be. Check deadline dates for turkey hunting permit and lottery applications. Even then, it might be a bit late. Call state wildlife management officials to get an inside angle on what's expected of hunters. Follow the procedure. Do they offer special archery turkey
01-11-2019 | Sports
CamoChic
Thinking about bow hunting, here are a few things to know
Never bow hunted before but want to give it a try? Here are a few tips that you will want to know beforehand. Don’t worry, it isn’t as difficult to learn as you might think. Not to mention, learning this skill will extend your hunting season so the effort is totally worth it! First off, you don’t need to spend a fortune on gear. You might even consider buying a second
10-16-2018 | Sports
CamoChic
What is high fence hunting and is it ethical
The definition, high fence hunting, is hunting within properties that are fenced with an 8 or 10-foot retaining fence (varies by state). These high fences are meant for keeping the deer on the property and keeping predators out. As you can imagine, this is another “hot topic” debate amongst hunters and it’s a debate that has been going on for at least a few years now. Take a look at this article