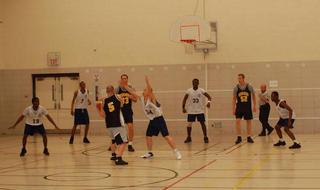 Columbia International College’s sports season has kicked off to a great start. According to the Athletics Department, this is the busiest time of the semester for intramural and extramural programs. With a wide range of activities going on at Columbia, students are engaged in healthy and active lifestyles. Table Tennis HighlightsTable Tennis Tournament saw a large turnout, with 16 students contending for the top three positions. Winners will be awarded with medals in recognition of their achievements during the college’s Awards Ceremony, to be held on December 2nd, 2009.Basketball - News on the HoopsTry-outs ended on a hopeful note as Columbia’s basketball team revamped their roster with choice picks for the winter season. This looks to be a good season for the team as they look forward to jump starting the season with the roster overhaul and addition of new talents.Basketball Intramural Tournament dribbled its way to a steady start on October 13th, with 9 teams going head to head, basket to basket, twice a week.Soccer on the RunThe Indoor Soccer Intramural Tournament kicked off on October 14th, with 10 teams playing twice a week, in two pools. Outdoor soccer saw a host of teams demonstrating their wit and skills on the field, with The Returning Don clinching 1st place and, C.M.B and Chaos in 2nd and 3rd place respectively. Winning teams will be recognized during the awards ceremony in December.Varsity try-outs for the Columbia Cougars have come to an end and training has started. The team’s players are now hard at work, perfecting their kicks and passes during practice.The Columbia Cougars Soccer Team has received invitations to participate in 3 tournaments next winter semester.About Columbia International CollegeThe college was founded in 1979 in Hamilton, Ontario. 40% of the teachers have a Master's Degree or PhD. All graduates in the past 15 years have been admitted to universities. Columbia International College is one of the best private boarding high schools in Canada. http://www.cic-totalcare.com1003 Main Street West Hamilton, Ontario Canada L8S 4P3 TEL: 1-905-572-7883 FAX: 1-905-572-9332

11-24-2009 | Associations & Organizations
Columbia International College
Anti-Bullying Week 2009: Changing Lives One Beat at a Time
Hamilton, Ontario, Nov. 21-- An afternoon of Rock music, heartrending stories and messages of hope kicked Anti-Bullying Week off at Columbia International College. Nearly 600 hundred students spent lunch time attending Think Day. The motivational multimedia presentation featured live music from Winnipeg band Hundredfold, thought-provoking videos and personal stories about bullying. Sharing a Message of Hope Students filled every corner of the school gym. There was tangible silence in the air as
10-30-2009 | Fashion, Lifestyle, Trends
Columbia International College
Caribbean Delicacies Kick Off Columbia's Cuisine Series
Oct 29, 2009, Hamilton, Ontario -- Presented by the Student Development Office of Columbia International College, the International Cuisine Series saw a full house on its opening – The Caribbean Prelude. With vibrant reds, greens and yellows adorning the Student Cafe, the Series got off to an amazing and promising start. Caribbean Culinary Delights It was an evening of delicious food, fun and island flair, with a menu sure to tantalize the
10-29-2009 | Sports
Columbia International College
Columbia Soccer Team Celebrated another Victory
The Cougars, Columbia International College’s varsity soccer team, celebrated yet another victory, this time, against the Hamilton Police. The soccer team of the largest Ontario boarding school showed off their athletic prowess, long running strides, excellent passes and scored two indefensible goals. With the entire team pumped up, and the game pulsating with energy, the showcase of soccer skills brightened up the dreary afternoon. Annual Soccer Game for Charity Every year, the Hamilton

04-09-2019 | Media & Telecommunications
Matrix PR
“Captain Tsubasa” Dream Tournament Dubai Qualifier Announced
KLab Inc., a leader in online mobile games, has announced that it will host the Dubai Round of the Captain Tsubasa: Dream Team Dream Championship 2019 at its booth at the Middle East Film & Comic Con (MEFCC) in Dubai in April. KLabGames will join an array of exhibitors from all over the world celebrating anime, comics, and games at MEFCC. The Arabic version of KLab’s live streaming service, KLab Games
06-20-2018 | Leisure, Entertainment, Miscel …
G & P Concrete, LLC
Independence Open Golf Tournament
G & P Concrete, LLC is proud to be a sponsor at this community event! Join the Troy Chamber for our 2nd Annual Independence Open Golf Tournament on Friday, July 13th at Woods Fort Golf Course, Troy, Missouri 63379. Sponsored by Peoples Bank & Trust! Golf Tournaments are always a fun time and you can show off your skills and maybe even win a prize or two! Lunch @ 11:30 am Tee-off @ 1
03-16-2017 | Leisure, Entertainment, Miscel …
Fishing Headquarters
Fort Lauderdale Drift Fishing Tournament Tomorrow
Fort Lauderdale, FL – Largest drift fishing tournament in Fort Lauderdale is being held tomorrow on Thursday, March 16 to benefit the charity OIC of South Florida. The tournament will be from 1pm-7pm aboard the Catch My Drift at the Fishing Headquarters Marina. Address is 301 Seabreeze Blvd, Fort Lauderdale, FL 33316. Anyone is welcome to participate, but spots are limited so you must have a reservation
05-11-2016 | Sports
EZFlex Sports Mats
Newbreed Ultimate Challenge Tournament
Preregistration is now closed. You can still register at the door on either Friday between 5 pm - 7 pm or on Saturday. The doors open at 8 am and the youth and teen competitors must be registered and weighed in by 9 am. Please see the TOURNAMENT SCHEDULE link below. Registration at the door is $99.00. Two divisions are included. Spectator fee is $15.00. !!! VENUE HAS CHANGED !!! Cabarrus Center 4751
05-21-2012 | Leisure, Entertainment, Miscel …
Hyatt Regency Hua Hin
HYATT OPEN GOLF TOURNAMENT 2012
Golf enthusiasts should not miss the 3rd annual Hyatt Open 2012 amateur golf tournament organised by Hyatt Regency Hua Hin and Grand Hyatt Erawan Bangkok, and to be held over the weekend of 21 - 22 July 2012 at the Banyan Golf Club in Hua Hin. This event will allow you to enjoy the charm of Hua Hin as a destination, experience the ultimate relaxation and authentic hospitality at
04-19-2011 | Energy & Environment
Sims Recycling Solutions
Sims Recycling Solutions Sponsors College Golf Tournament
For the second year, Sims Recycling Solutions sponsored the Hootie at Bulls Bay Intercollegiate Golf Tournament. The seventh annual tournament brought together 15 NCAA Division I top ranked golf teams and 5 of the top 25 college ranked college golfers in the United States to participate in a three day tournament. This is the only college golf tournament linked with any rock band. The rock band associated is Hootie and
Comments about openPR
OpenPR is clearly structured and remains true to its principle of confining itself to the essential parts. OpenPR has proven to be a very good and reliable partner to our media agency: Within the shortest time the releases are online and go down well with the media representatives. The success of OpenPR is reflected in the steadily increasing number of press releases. It is good that OpenPR exists!
Ursula Koslik, Director Marketing & PR, F+W Hamburg