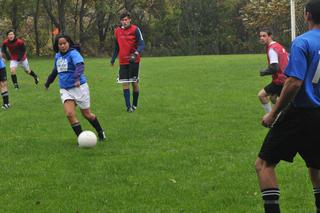 The Cougars, Columbia International College’s varsity soccer team, celebrated yet another victory, this time, against the Hamilton Police. The soccer team of the largest Ontario boarding school showed off their athletic prowess, long running strides, excellent passes and scored two indefensible goals. With the entire team pumped up, and the game pulsating with energy, the showcase of soccer skills brightened up the dreary afternoon. Annual Soccer Game for Charity Every year, the Hamilton Police engages in a friendly match with the students for charity, and they always put up a good fight. Columbia has won every game against the Hamilton Police in the past, except for a 3-3 tie, two years ago. These matches are amazing opportunities where our students mingle with, and pit their skills against local police officers in a fun and competitive environment. The Cougars’ electric performance saw fancy footwork, aggressive form and tight game plan. It was an intense game of great caliber and skills that played up the frosty afternoon amidst enthusiastic cheers. The Hamilton Police team also showed off their skills and it was a match of wills, wit and endurance. A narrow win for the Columbia Cougars Supported and cheered on from the sidelines by students huddling together in their bid to stay warm, the Columbia Cougars soccer team emerged victorious, beating the Police team, 2-1. The game was a display of teamwork, trust and insightful judgment from both teams. “Over all, I think it was a good quality game and both teams showed good sportsmanship and character on the field.” Mr. Erind Hamtaj of the Student Development Office said.“As for our students, I believe that they dominated the game by having more possession and control on the field.” The match result shows yet again, the excellence and dedication that Columbia strives for, in every student and in every arena of their personal development. About CIC Total Care Columbia international College is the largest boarding school in Ontario, with 1,300 students from 51 countries. Since 1979, Columbia International College, under the unique Total Care Education System has been preparing students to achieve their goal of gaining admission into top universities worldwide. The graduating class has been the largest in Canada for the past 7 years. The ’06/’07 academic year alone saw over 500 graduates from 45 countries gain admissions. Columbia International College of Canada 1003 Main Street West Hamilton, Ontario Canada L8S 4P3