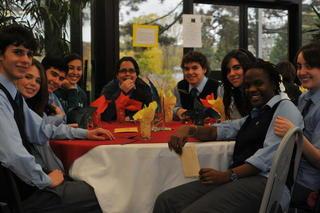 Oct 29, 2009, Hamilton, Ontario -- Presented by the Student Development Office of Columbia International College, the International Cuisine Series saw a full house on its opening – The Caribbean Prelude. With vibrant reds, greens and yellows adorning the Student Cafe, the Series got off to an amazing and promising start.

It was an evening of delicious food, fun and island flair, with a menu sure to tantalize the palate of those present. The colorful decorations created a lively and cheerful atmosphere that complimented the sprightly flavors of Caribbean cuisine; a sumptuous lineup of black fish with mango salsa, Caribbean cabbage salad, and zucchini with yam stir-fry and, the crowd favorite, slow-cooked jerk chicken. Two delectable desserts, mixed fruit crisp and mango coconut rice pudding topped off the tropical meal.

Other highlights included the Caribbean Trivial Pursuit, Caribbean music and the highly anticipated Limbo Dance. Prior to dinner, students were engaged in the mini trivial pursuit, searching for answers to Caribbean themed questions. An interesting tidbit on the most famous Jamaican singer song-writer was also revealed; his real name is Robert Nestar Marley! After dinner, students played the Limbo, it was huge hit. Starting off with nearly 30 students, the numbers quickly dwindled as they tried to maneuver their way under the pole, as it came closer to the ground. The jovial game saw students jiving to popular Caribbean tunes.

Columbia’s International Cuisine Series is spearheaded by the Student Development Office, with students playing an active role in the planning and execution of themed cultural evenings. The Caribbean Prelude was a showcase of diversity and harmony, organized by students, for students.

"It was really an amazing start to the International Cuisine Series this semester. It is only going to get better and we are excited to see the progress.” said Mr. Brandon Lewis of Student Development Office.

The International Cuisine Series is an excellent display of Columbia’s school spirit, with students’ engaging themselves in the exchange of rich Caribbean culture. It was an evening of cultural exposition and understanding as the Caribbean Prelude came to an end on a high note, with the night’s Limbo Queen claiming her trophy.

Established in 1979 in the Hamilton, Ontario, Columbia International College is Canada’s top private boarding school for boys and girls. Total Care Education System® guarantees an excellent bridge to prestigious universities and boasts exclusive partnerships with top universities in Canada. For the past 13 years, 100% of Columbia's graduates have been admitted to universities.
www.cic-totalcare.com

11-24-2009 | Associations & Organizations
Columbia International College
Anti-Bullying Week 2009: Changing Lives One Beat at a Time
Hamilton, Ontario, Nov. 21-- An afternoon of Rock music, heartrending stories and messages of hope kicked Anti-Bullying Week off at Columbia International College. Nearly 600 hundred students spent lunch time attending Think Day. The motivational multimedia presentation featured live music from Winnipeg band Hundredfold, thought-provoking videos and personal stories about bullying. Sharing a Message of Hope Students filled every corner of the school gym. There was tangible silence in the air as
11-03-2009 | Sports
Columbia International College
Columbia Sports Teams Gear Up for Busy Season
Columbia International College’s sports season has kicked off to a great start. According to the Athletics Department, this is the busiest time of the semester for intramural and extramural programs. With a wide range of activities going on at Columbia, students are engaged in healthy and active lifestyles. Table Tennis Highlights Table Tennis Tournament saw a large turnout, with 16 students contending for the top three positions. Winners will be awarded
10-29-2009 | Sports
Columbia International College
Columbia Soccer Team Celebrated another Victory
The Cougars, Columbia International College’s varsity soccer team, celebrated yet another victory, this time, against the Hamilton Police. The soccer team of the largest Ontario boarding school showed off their athletic prowess, long running strides, excellent passes and scored two indefensible goals. With the entire team pumped up, and the game pulsating with energy, the showcase of soccer skills brightened up the dreary afternoon. Annual Soccer Game for Charity Every year, the Hamilton

02-22-2017 | Tourism, Cars, Traffic
Future Market Insights
Caribbean Cruises Intelligence Report Offers Growth Prospects
Caribbean cruises are gaining in popularity as many tourists come to the Caribbean islands to enjoy the sunshine, the pristine beaches and a laid back lifestyle. There are many Caribbean cruises to choose from, the major ones being eastern Caribbean cruises, western Caribbean cruises, southern Caribbean cruises and the tropical Caribbean cruises. The most popular ports and places to visit in a Caribbean cruise are Barbados, Grenada, Dominica, Tortola, Aruba,
08-18-2011 | Tourism, Cars, Traffic
World Travel Awards
Jamaica Leads Caribbean Tourism Rebound
London, United Kingdom, 15 August 2011 Jamaica’s role in spearheading the recovery of the Caribbean’s travel and tourism economy is to be acknowledged by World Travel Awards at a VIP ceremony in Montego Bay in October. The awards programme, hailed as the ‘Oscars of the travel industry’ by the global media, noted that Jamaica’s growth in visitor arrivals this year is expected to beat 2010’s impressive five percent rise, and comes despite
02-02-2011 | Advertising, Media Consulting, …
Caribbean BlueBook
Connect with the Caribbean Community, Keep Up with Caribbean Businesses News wit …
Long Island, NY – January 27, 2011 – Times are changing and with that the conventional methods that Caribbean businesses used to rely on, such as the Yellow Pages and word of mouth, are simply not as effective. Consumers have more options available to them now than ever before, and businesses are finding it difficult to reach out to all of them. Caribbean BlueBook bridges that gap by bringing consumers
10-19-2009 | Tourism, Cars, Traffic
Condor Tours and Travel
Condor Tours Offers Panama And Caribbean Cruise
Lawrenceville, GA: Condor Tours and Travel announced its new Surf and Turf Panama Tour and Caribbean Cruise tour package. The special tour and cruise combination gives travelers the chance to explore Panama on land, and enjoy seven nights aboard Royal Caribbean Cruise’s Enchantment of the Seas. As a start and finish point for the cruise, Panama brings its charms as a tourist destination of its own along with the country’s
05-06-2008 | Industry, Real Estate & Constr …
Global Property Guide
Caribbean Property Prices
The Caribbean, the playground of the rich and famous, has been getting more affordable. The depreciation of the US dollar against major currencies such as the British pound and the euro, has made Caribbean properties more attractive. More affordable… but still not cheap! Property prices in more popular and developed islands can easily reach over one million US dollars for a house and lot near the beach.
01-28-2008 | IT, New Media & Software
Globalnet
It’s “Caribbean Calling” with Motorola this DSF
Globalnet, the authorized distributor for Motorola in the UAE announced its special promotions as part of its sponsorship activities during Dubai Shopping Festival. Luxury Cruise packages to the Caribbean, LCD TVs, XBOX consoles feature amongst the countless prizes that can be won during this DSF. This offer entitles each customer to win a prize with a scratch and win coupon upon the purchase of a Motorola phone from Globalnet’s retail
Comments about openPR
9 o'clock: discuss press release with client, 10 o'clock: submit release to openPR, within the briefest possible time release is published and displayed in a prominent place on openPR.de. I am thrilled!
Zehra Spindler, Calypso Now! - Communication Agency