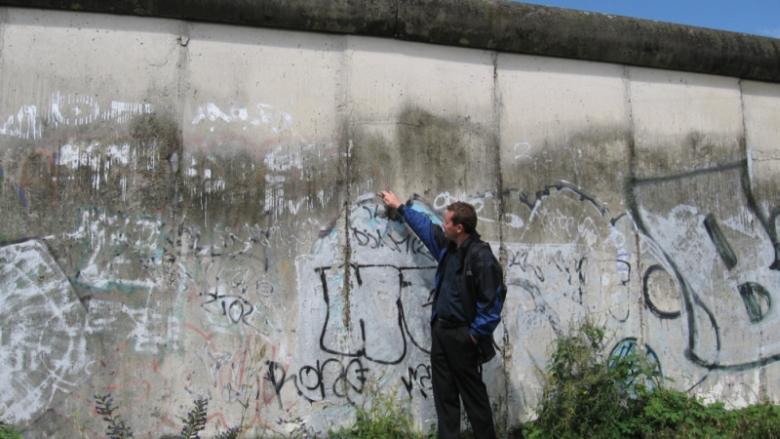 20 years ago the Berlin Wall came to and end. It came as a surprise to Cliewe Juritza. In 1984, he tried to leave the GDR and was arrested in the attempt. He was sentenced to 12 month in prison and was able to leave jail after 10 month – the Federal Republic of Germany had paid money for his release. He lived in West-Berlin when the Wall fell. Today he offers tours along the former Iron Curtain in the middle of Berlin. „As a child and as a young man, I only knew life with a wall, life behind a wall“, Juritza explains to the tourists who want to know more about the wall, off the beaten path, away from the tourist hype at Checkpoint Charlie. At Bernauer Strasse the traces of the former wall are still visible but often overlooked. Cliewe Juritza knows them all. He walks through the grass. „Here you can see the remains of the footings of the wall.“ „Over there, that is where the first fence stood“. „The Wall was not just a wall – it was a system of walls, fences and barricades.“ He tells about the people on the southern side of the street. Their houses stood in the Russian sector, the walkway in front of the door was in the French sector. It was just one step from the East to the West. Where was East, where was West, where was the Wall, where was the border? With astonishing precision and patience Juritza explains the geography of post war Berlin. The way down the Bernauer Strasse on tour with Cliewe Juritza is not only a geography lesson about the cold war but a time travel back to 1945 until today. As one of the few people who lived on both sides of the Berlin Wall, Juritza explains what living behind the Wall meant to people in East and West . The tour “When the Berlin Wall was no monument but real” starts on october 24 at 1 p.m. at tram station Friedrich-Ludwig-Jahn-Sportpark (M10). Costs are 15 EUR per person. No registration is necessary. Rain gear and sturdy shoes recommended.I know three Berlin realities: East, West and the reunited Berlin. I was born in 1966 in the eastern part of Berlin, grew up and went to school in Prenzlauer Berg. After several fruitless attempts to escape from the GDR, I was imprisoned in 1984 and sentenced to twelve month in prison. After ten month in jail I was bought free from the Federal Republic of Germany and released from the GDR. During my study of political sciences in West-Berlin, I experienced the fall of the Berlin Wall in the fall of 1989. Until the mid 1990ies I worked for the Berlin Senate of Urban Development and organised architectural invitations to tender, e.g. the competition of the chancellery and the federal presidents' office. I worked as a free lance journalist and in the press department of McDonald's Germany. Since January 2007 I am a tour guide in Berlin.Cliewe Stadtführungen Cliewe Juritza Am Steinberg 14 13086 Berlin Tel.: 0179 47 29 007 e-mail: cliewe@cliewe.de www.cliewe.de

12-10-2011 | Tourism, Cars, Traffic
Cliewe Stadtführungen
New guided tour Berlin Kreuzberg: From East-Station (Ostbahnhof) to the former b …
Tour guide Cliewe Juritza is offering a new tour through Berlin-Kreuzberg. The tour starts at Ostbahnhof (East-station) and follows the former Luisenstad canal to the former border crossing point Heinrich-Heine-Straße. This part of the town was named after the Prussian queen Luise – the Luisenstad was once a suburb of Berlin and today in the very centre of the city. After the erection of the Berlin Wall, the Luisenstadt became