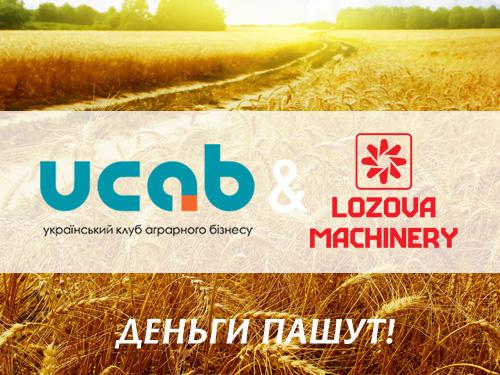 LOZOVA MACHINERY joined the Ukrainian Agribusiness Club (UCAB) and became the only domestic producer of the agricultural implements among the association members.“To be the first and the best is that LOZOVA MACHINERY is seeking to and what unites our company and UCAB”, – Roman Girshfeld, Vice President Sales and Marketing, points out.The own unique developments and patented solutions, implemented in LOZOVA MACHINERY tools, allowed the company to be the first, who brought to the market Ukrainian implements of the global level of quality and reliability, and to compete with the leading producers of agricultural machinery. “We use an individual approach, when we design each of the agricultural implements, putting in a unique conception of the constructive solutions and showing the highest demands to the quality, reliability and productivity parameters of the implements in order to correspond the farmers’ needs, – Aleksey Grinenko, Chief Designer, tells. – For example, LIRA tooth harrow is a first mass-produced LOZOVA MACHINERY implement. In 2000’s it became a real breakthrough on the Ukrainian market of agricultural implements and still, it occupies the leading positions in this segment, making a name “legendary” for itself”. Today LOZOVA MACHINERY offers a wide range of energy-efficient implements, helping the farmers to save the soil fertility, to get heavy yields and finally, to increase the income from year to year, from yield to yield. Annually thousands of Ukrainian and foreign farmers prefer Ukrainian producer by choosing the implements and make sure that with LOZOVA MACHINERY – MONEY REALLY WORKS! Taking into account the intensity of agriculture developing, the continuous development, expanding of product range, modernization of the existed products, entering to new segments of agricultural machinery markets allow LOZOVA MACHINERY to be in demand. Thus, last year the traditional range of tooth harrows was replenished by heavy implements – LIRA XL with working width 15 and 21 meters. In the assemblage with heavy drag harrows LARI they present a new generation of the large-format combined agricultural implements. The implements are easily transformed from spring harrows into drag harrows and vice-versa due to unified frame, what allows the farmer to get practically two implements for the price of one. The range of DUCAT disc harrows is increased annually. The new representatives appear as well as the possibilities of equipping widen. For example, from this year the farmers can choose one variant of five rollers (needle, rubber, dish-shaped, p-shaped and standard rod-shaped), depending on the desirable level of effects of the roller on the soil surface. Last year the harrowing classic was supplemented with heavy implements for work on tilled crops – DUCAT GOLD disc harrow. This implement has become a global premiere on the largest and the most important exhibition Agritechnica-2017 in Germany, where LOZOVA MACHINERY presented a Ukrainian producer with dignity. “At the exhibition in Hannover last year as well as in 2015 LOZOVA MACHINERY became the only Ukrainian company, which presented the achievements of domestic engineering in the segment of tillage and seeding implements to the global agricultural society” – Roman Girshfeld tells. It is to be pointed out that LOZOVA MACHINERY is an active participant in the international exhibitions. Last year the company took part in more than 100 events within the tour #lozovamachinery100. This year we are going to visit over 20 countries of Europe and CIS within Greentour in order to demonstrate the universality of the implements to the farmers, working in accordance with traditional as well as gentle energy-saving technologies. The 25% compensation of LOZOVA MACHINERY implements costs attracts the Ukrainian farmers.“The joining of LOZOVA MACHINERY to Ukrainian Agribusiness Club is our next step in order to foresee new demands of the farmers and meet the market’s needs beforehand, offering innovative energy-efficient technologies for all types of agriculture, soils, and regions”, – Roman Girshfeld sums up. Reference:Association ‘Ukrainian Agribusiness Club’ was founded in 2007 on the initiative of five AIC Ukrainian companies. Today the association takes the position №1 in the domestic agro-industrial sector, uniting over 100 significant representatives of the industry – agricultural enterprises and suppliers of agricultural resources, aiming to the following development of the domestic agribusiness.LOZOVA MACHINERY is a domestic brand of tillage and seeding agricultural implements, which are presented by more than 10 innovative product ranges, corresponding to the highest quality demands and market demands. The products are supplied to more than 20 countries through official distributor – UPEC TRADING and the network of dealers in CIS, Middle East, and Eastern Europe.4, Marshal Batitskiy Str., Kharkov, 61038, Ukraine e-mail: vnv@upec.ua

01-31-2019 | Industry, Real Estate & Constr …
Kharkiv Bearing Plant HARP
Ukrainian bearing plant discovers Turkish market
In 2018, Kharkov Bearing Plant (HARP) share export was 64 %. This year the company is going to increase this index up to 70 %. HARP is going to begin 2019 with the entering the Turkish market. The first steps for this will be a debut participation of HARP in the international agricultural exhibition AGROEXPO, which will take place in Izmir on February 7-10. “Turkey is a prospective market for
08-22-2018 | Industry, Real Estate & Constr …
HARP
Ukrainian HARP enters Canadian market
Within demonstration tour Discover HARP, Kharkov Bearing Plant (HARP) starts to move further to the Canadian market. On September 11-13, the leading domestic producer of bearing products will take part in the largest agricultural exhibition of the North American continent – Canada's Outdoor Farm Show. HARP will become the only Ukrainian producer, which will present the bearings for agricultural sector at this event. “70-years production experience allows us to satisfy the
08-05-2011 | IT, New Media & Software
PMR Ltd
Ukrainian IT market worth €1bn
Ukrainian IT market increased by approx. 30% last year. In Euro terms its value crossed €1bn, which is comparable with the level recorded in 2005 and it represents a half of the value from 2007. In 2010 IT products and services sales bounced back. Ukraine got some economic recovery after the financial crisis and political stability after the presidential and local elections. According to the latest report by the research
01-26-2010 | Energy & Environment
ZORG UKRAINE Ltd.
Ukrainian biofuel industry receives tax benefits
By the 18-th of January 2010 the Ministry of Industrial Policy of Ukraine received 7 requests to proceed with a concessionary import of equipment, used within the industry of renewable fuels. Following information has been provided by the press-service of consulting company FuelAlternative. On January 1, 2010 Ukrainian government validated a law “On making changes and additions to the tax policy of Ukraine in order to facilitate production and
06-06-2007 | IT, New Media & Software
Hi-Tech Initiative
New member of Ukrainian Hi-Tech Initiative
21 May 2007, Kiev. Ukrainian Hi-Tech Initiative membership increased with a new company – “Krendls” (Dnepropetrovsk). “Krendls” is the European software development company located in Ukraine with the representative office in Germany. The company started its operation in 2006. Now it is a dynamically growing company providing fast and highly-functional solutions for B2B and B2C segments. Main development interests of “Krendls” are closer partnership with European companies as well as
08-01-2006 | IT, New Media & Software
Mirasoft Group
Mirasoft Group Enters Ukrainian Hi-Tech Initiative
Mirasoft Group became a member of the Hi-Tech Initiative – Ukrainian Alliance of Offshore Software Development and IT companies. Thus the company confirms its status of an active player of Ukrainian IT industry and undertakes further to invest into development of IT society in the country on the ground of the long time experience of successful work in the industry. Mirasoft Group membership in Hi-Tech Initiative is a harmonic sequel of
Comments about openPR
9 o'clock: discuss press release with client, 10 o'clock: submit release to openPR, within the briefest possible time release is published and displayed in a prominent place on openPR.de. I am thrilled!
Zehra Spindler, Calypso Now! - Communication Agency