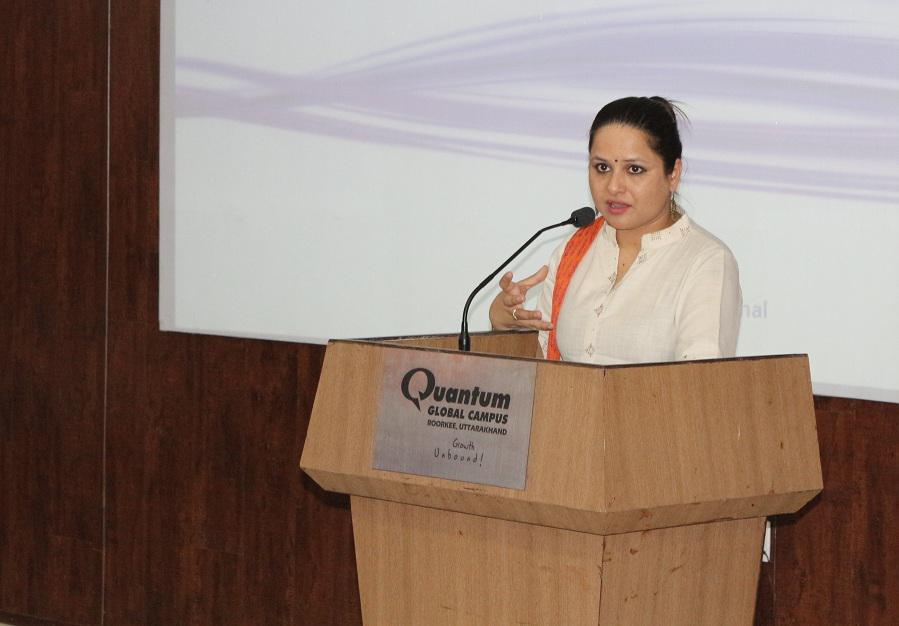 The cell to actively highlight current research at Quantum University

uantum University has been constantly scaling new heights with every passing year. High standards of quality education have been the hallmark of Quantum. A new page in the success story of Quantum has been it recently acquired status of a university. Quantum has adapted well to the changing beliefs and demands in the society and makes constant efforts to be in sync with it. Continuing this tradition the University has now set up an Intellectual Property Rights' Cell. It aims to help the scholars and intellectuals get copyrights and patents for their creative work. A workshop was organized at Quantum campus to update the concerned students and scholars about the modus operandi.Intellectual Rights concern the creative activities of humankind. Common physical assets like lands, houses and liquid money are considered property. Similarly, the intellectual property is the intangible creation of the human intellect and primarily protected by copyrights, patents and trademarks.The ideas and visions shared in the field of literature, science and arts are published in the concerned journals and books. Such creative work is the intellectual property of the creator. A patent, copyright, and trademark protect such intellectual contents/ideas and ensure an individual gets the due credit for their respective creation/s.Patents are given in the field of engineering and science. Books, songs, and literary work are protected by copyrights; while trademarks help a company safeguards its commercial and business interests.The chief orator of the workshop was Dr. Shweta Singh. Illustrating the concepts of intellectual property to the participants of the workshop she said that patents and copyrights could be compared with land registration. "Land registrations are necessary to claim ownership of any landed property. Similarly, the patent or copyright identifies the original mind behind a book, invention, research or a song," she said."As per a report of the World Intellectual Property Organization (WIPO), China has emerged as a leader in this field. Around 14 lakh people file for a patent in China, while only 40,000 patents applications are recorded in India," she informed.Dr. Singh further talked about the patent dynamics imposed by Apple which has just 15 patented products in the market, yet it is a leader in the field of Information Technology. The company has made at least 1000 patents under every product, this way the IT giant has more than 15000 patents.Dr. Singh added further that a person gets a royalty for its work whenever his/her work comes to use. A person's creative work or copyright remains valid until 60 years after the demise of the creator.University Vice President, Mr. Shobhit Goel, highlighted the importance and need of intellectual property. He advised the audiences to utilize the services of Quantum IPR cell to prevent the misuse of new ideas in the field of technology and help writers, researchers get recognition on the global stage with their creations.Quantum has set an ambitious target of 30 patents and has started working with full vigor in this direction. Quantum has a solid infrastructure for research work. Students and teachers have already started working in the Quantum labs to aid the development of the society with its inventions and discoveries.Quantum UnivercityOffice: 4834/24, 1ST FLOOR, KIRAN MANSION, ANSARI ROAD, DARYAGANJ, NEW DELHI -110002

04-13-2018 | Fashion, Lifestyle, Trends
Goldmine Adv ltd
Planning a marriage? WeddingChime App an answer to all wedding concern.
If the groundwork is daunting you at your wedding, you need technology to iron the frills. Wedding Chime Pvt. Ltd. brings in technology to the aid of wedding-preparation with the launch of its App, ‘Wedding Chime’ in New Delhi ! With an aim to improve and enhance the traditional wedding experience for guests and hosts alike 'Wedding Chime' is produced on a cutting-edge technology and will be revolutionary in a way
04-10-2018 | Politics, Law & Society
Goldmine Adv ltd
Thousands of HCC employees facing unemployment, plan massive agitation at Ramlil …
New Delhi: The employees of Hindustan Construction Company Limited (HCC) are going to stage a protest against the wrong policies of the Central Government on May 7 at Delhi's iconic Ramlila Maidan. Several opposition parties like Congress, Aam Admi Party (AAP), TMC, SP and other trade unions are going to join the protesters in their agitation against the Centre. The chief secretary of the union has informed that Union
04-03-2018 | Science & Education
Goldmine adv ltd
Maple Assist Website launched at Canada House, New Delhi
Maple Assist Inc. launched the Maple Assist Website, a pioneering initiative in the field of Canadian education. The website is set to provide an interactive learning platform for students applying to Canadian colleges and universities of their choice. Through Maple Assist, students will have access to a unique database of useful information on colleges and universities, their admission process, as well as details on living and working in Canada. The website
03-23-2018 | Science & Education
Goldmine Adv ltd
Quantum Sports Meet 'Udaan 2018' gives wings to a thousand students!
More than 800 students from Uttarakhand and neighbouring states competed in the two-day annual Sports Meet organised by Quantum University, titled 'Udaan 2018'. The enthusiastic students participated in the competitions such as basketball, volleyball, tug of war, football, badminton, long jump. Several indoor games were also organised by the University in which the students showed their keen interest. Highlighting the importance of sports in a student's life, Secretary of the University,