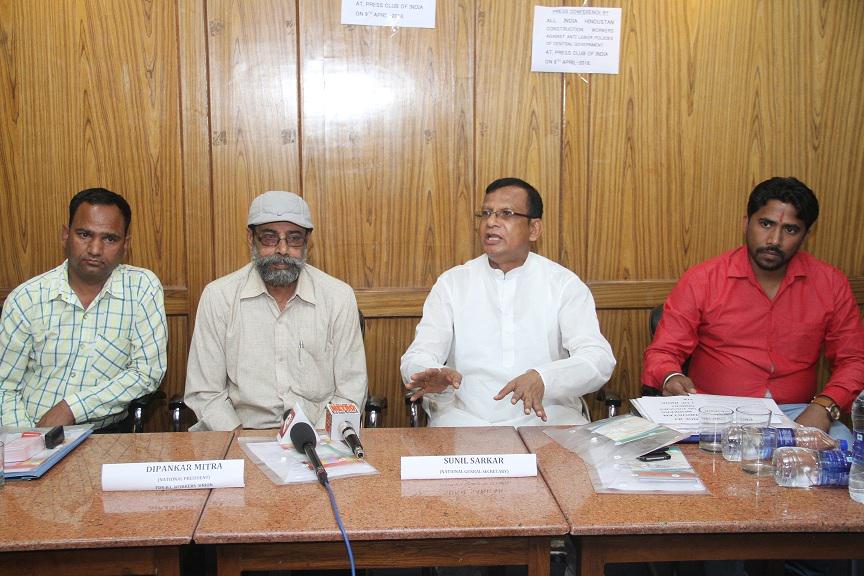 New Delhi: The employees of Hindustan Construction Company Limited (HCC) are going to stage a protest against the wrong policies of the Central Government on May 7 at Delhi's iconic Ramlila Maidan. Several opposition parties like Congress, Aam Admi Party (AAP), TMC, SP and other trade unions are going to join the protesters in their agitation against the Centre. The chief secretary of the union has informed that Union Government has not cleared the dues which are in thousands of crores. As a result, several projects are on the verge of getting shut and nearly 10000 employees are staring at getting unemployed. If the government doesn't clear the dues on time, then several projects will be shut and employees will be laid off. These employees who are facing job insecurity are finding it hard to run their families as well. The national president of the union, Shri Dipankar Mitra, informed that almost 90 percent of national projects, including hydropower projects, national highways, nuclear power projects, metro rail, thermal power plants, etc. are being undertaken by this company. The general secretary of Federation of All India Hindustan Construction Workers Union, Shri Sunil Sarkar said that NHAI, NHPC, and several other Central Government undertakings have a total pending due of Rs 8943 crore. NHAI has to pay Rs 4157, while NHPC and other Central government undertakings are supposed to pay Rs 4786 crore. Despite the recommendations of mediation forum and court orders, the government hasn't yet cleared the dues. Due to this, the HCC is facing an acute financial crisis. Union's general secretary has informed that repeated requests to the PMO and Union Labour Ministry haven't yielded any desirable results to the HCC. He further informed that the pace of projects on which HCC is looking after are either running at snail's pace or have already been stopped due to delay in the payment. The union has also regretted that the government hasn't taken any step to help those who went jobless due to non-payment of dues. The projects which are under process are also facing the crisis due to unavailability of funds and company couldn't pay the employees their salaries on time. Sarkar informed that they will protest against the adverse and non-cooperative behaviour of the Central Government, the HCC in association with major opposition parties will agitate on May 7. He further added that the not just HCC employees, in fact, the entire construction sector is affected due to this. Regional secretary Krishna Lal Arya said that the company, in association with various trade unions they met with the officials at PMO and Labour Ministry in 2016 and 2017 and raised the concerns of the construction industry i.e. shortage of funds, and sacking of employees. But nothing has been done to address their problems and they now have only one option i.e. protest. He rued if necessary steps are being not taken and policies revamped, then several construction companies will end up losing important projects and thousands of employees will go jobless.Hindustan Construction Company Limited (HCCOffice: 4834/24, 1ST FLOOR, KIRAN MANSION, ANSARI ROAD, DARYAGANJ, NEW DELHI -110002

You can edit or delete your press release Thousands of HCC employees facing unemployment, plan massive agitation at Ramlila Maidan on May 7 here

04-13-2018 | Fashion, Lifestyle, Trends
Goldmine Adv ltd
Planning a marriage? WeddingChime App an answer to all wedding concern.
If the groundwork is daunting you at your wedding, you need technology to iron the frills. Wedding Chime Pvt. Ltd. brings in technology to the aid of wedding-preparation with the launch of its App, ‘Wedding Chime’ in New Delhi ! With an aim to improve and enhance the traditional wedding experience for guests and hosts alike 'Wedding Chime' is produced on a cutting-edge technology and will be revolutionary in a way
04-03-2018 | Science & Education
Goldmine adv ltd
Maple Assist Website launched at Canada House, New Delhi
Maple Assist Inc. launched the Maple Assist Website, a pioneering initiative in the field of Canadian education. The website is set to provide an interactive learning platform for students applying to Canadian colleges and universities of their choice. Through Maple Assist, students will have access to a unique database of useful information on colleges and universities, their admission process, as well as details on living and working in Canada. The website
03-29-2018 | Science & Education
Goldmine Adv ltd
INTELLECTUAL PROPERTY RIGHTS CELL INSTITUTED AT QUANUM UNIVERSITY.
uantum University has been constantly scaling new heights with every passing year. High standards of quality education have been the hallmark of Quantum. A new page in the success story of Quantum has been it recently acquired status of a university. Quantum has adapted well to the changing beliefs and demands in the society and makes constant efforts to be in sync with it. Continuing this tradition the University has
03-23-2018 | Science & Education
Goldmine Adv ltd
Quantum Sports Meet 'Udaan 2018' gives wings to a thousand students!
More than 800 students from Uttarakhand and neighbouring states competed in the two-day annual Sports Meet organised by Quantum University, titled 'Udaan 2018'. The enthusiastic students participated in the competitions such as basketball, volleyball, tug of war, football, badminton, long jump. Several indoor games were also organised by the University in which the students showed their keen interest. Highlighting the importance of sports in a student's life, Secretary of the University,