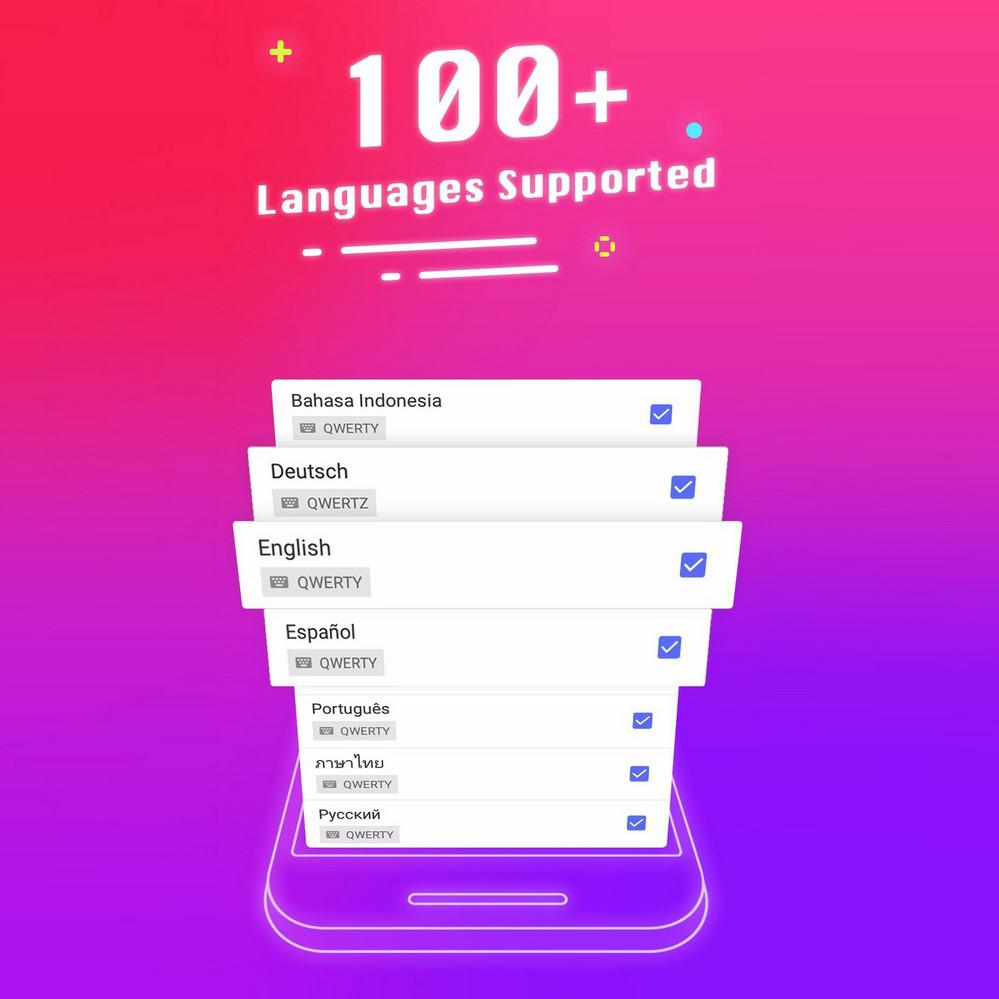 For Immediate Release San Francisco, CA, USA, March 21, 2018 Smartphones are globally ubiquitous, and while local customizations are available from stock, support for the vast array of world languages can be a major problem. Typany Keyboard, an app for Android and Apple phones, has focused on bridging language barriers by ensuring speakers of less-common languages are able to make best use of their phones. Two examples are Cebuan, spoken by around 21 million people in the Philippines, and Javanese, used by over 42% of Indonesians. Speaking about her company’s keyboard product, Typany’s Product Marketing Manager, Yami Sun, said “We at Typany believe in embracing linguistic diversity, and so we have included Cebuan and Javanese in the wide suite of languages supported by the Typany Keyboard App.” She continued “Offering rapid predictive text input, our app helps users communicate efficiently, whether they are speakers of Cebuan, Javanese or any of the other hundreds of languages we support. This is all part of our goal to help the world communicate, whichever language is spoken.” The Typany Keyboard App, which can be downloaded for free from the Apple App Store and the Google Play Store, integrates with all social network apps, such as WhatsApp, Facebook Messenger, Snapchat, Twitter etc, and can be customized by users to match their personal style. Emojis and line drawing input are also fully supported, making Typany Keyboard a fun and colourful experience for users of all ages. Typany has attracted the attention of respected industry analysts, and was described by Gizmodo as “the ultimate in bright and varied keyboard themes”. Android Authority wrote “it boasts tons of themes, stickers, emoji, and more”.ABOUT TYPANY Typany Keyboard App is powered by Sogou, well known in China for its language input method, universally employed by Chinese users. Sogou has been developing smartphone software since 2006. Its Keyboard App is one of the fastest-growing apps in the category on Android and iOS, responding to growing consumer demand for a better way to quickly express thoughts and feelings in a visual way, epitomized by the now almost-universal use of emojis. Typany’s mission is to team with users to bring the smartest, most diverse, time-saving solution to millions more people worldwide. Typany Keyboard supports more than 100 languages, with lightning-fast personalized prediction technology and comprehensive customization features. The company has harnessed AI technology to provide a performance edge and improved customer experience.PRESS INQUIRIES AND CONTACT DETAILS Contact: Yami Sun, Product Marketing Manager Address: Typany Keyboard, 9th Floor, Sohu.com Internet Plaza, No.1 Park, Zhongguancun East Road, Haidian District, Beijing 100084, PRC Website: http://typany.com Email: typany_press@sogou-inc.com

07-24-2018 | IT, New Media & Software
Typany Keyboard
Look! Typany is Blooming in Your Hand
Do you love to dance? Yes? Come on give me your hands! You are not alone now, Typany will dance with you. Wherever and whenever you are, no matter what you want to dance, Typany will appear in front of you with magic. As a well know integrated Keyboard App, Typany now collaborates with LIKE, seeking a new way to engage with users. LIKE is a breakthrough social video platform
07-20-2018 | IT, New Media & Software
Typany Keyboard
Why can Typany Keyboard get Featured in Google Play Store?
What a Special Day! Typany Keyboard was featured by Google Play. We know that getting successfully submitted in the Google Play is very often a tough task. But getting featured is even harder. Since 2018, about 184k new apps released in the Google Play every month. Let us tell you our personal getting-featured experience. In order to give yourself a fighting chance for getting featured in the Google Play, you
07-19-2018 | IT, New Media & Software
Typany Keyboard
Give Donnie Baby a Good Night Kiss Please
In the past few days, Donald Trump was mocked on social media after his ‘disgraceful performance’ during the Helsinki Summit with Russian leader Vladimir Putin. It’s bizarre to say because Putin is younger, but this looks more like a father and son issue for Trump where he admires Putin as “strong and powerful” and Trump wishes to be like him and wants his approval for everything. It is how Trump
07-13-2018 | IT, New Media & Software
Typany Keyboard
Built-in AI Assistant on Your Fingertips - TiPi is Here!
Who is TiPi? Good question! Tipi is a Built-in AI Personal Assistant on Typany Keyboard. TiPi is fulfilling multiple roles, it is your weather reporter, your tour guide, your sports commentator, and your friends. However, it is not a superhero that will do anything for you. You could completely maintain your personal space and autonomy. TiPi will just appear when you need some help so that you can type faster

05-17-2022 | Advertising, Media Consulting, …
Get Any language - Translation Services
Best App Localization Services to Globalize Your App Development
The idea behind making a mobile app universal is to ensure that the app is accessed by global users regardless of their locations and language. Before expanding the app, its content and functionality must be localized for multiple languages and countries. GetAnyLanguage is the company that makes it possible. Since its inception, the company has been doing localization of mobile apps by translating its content into multiple languages
03-02-2021 | IT, New Media & Software
FOXXUM GmbH
Anghami Music App now available on Foxxum App Store
Users of Tornado and Toshiba smart TV devices can now enjoy a library of millions of Arabic and international songs, music videos and podcasts on their smart TVs – for free. Through the partnership with Anghami, Foxxum has brought the MENA region’s leading music platform on board of its Foxxum App Store. With the Anghami smart TV app, viewers with a Toshiba or Tornado smart TV can listen to music
02-25-2020 | IT, New Media & Software
Ipsilon Developments Inc.
Book2.App - Convert your original PDF into an Android app & web app for FREE!
WILMINGTON, Del. - Feb. 26, 2020 - Ipsilon Developments launches Book2.app! A new app that let you convert your original work PDF into an Android & Web app!. Book2.app is a new web & mobile app, that allows you to convert your original work in PDF format, in an Android App, ready to publish into the Google Playstore! You can upload any original work, in PDF format, no technical knowledge is needed,
10-07-2019 | Science & Education
The Insight Partners
Patient Centric Healthcare App Market 2019: Technology Based Development coverin …
Patient centric health care app market is anticipated to grow in the forecast period owing to driving factors such as the rising number of innovations in technology, increase in population, surge in expectations in quality of care. Moreover, Rise in prevalence of chronic diseases, higher life expectancy, and patient enablement and empowerment, rising investments by major players for the growing demand are also offering opportunities in the market growth during
06-22-2018 | Science & Education
Webanywhere
School Jotter App Trending on the Apple App Store
School Jotter, a UK school mobile app has been trending at #16 for Education on the Apple app store. The app is increasingly gaining popularity thanks to its ability to connect primary school teachers with parents. School Jotter as the most downloaded school mobile app in the UK is also available in multiple markets including the USA, New Zealand, Australia and more. The user friendly School Jotter mobile app became
02-01-2017 | IT, New Media & Software
Health Insurance App Benchmarking
Health Insurance App Benchmarking 2015 Market Research Report - Industry View, A …
ResearchMoz added Latest Research Report titled " Health Insurance App Benchmarking 2015 - How health insurance companies make use of mobile apps " to it's Large Report database. The report analyzes the global app publishing activities of the leading Health Insurance Companies on Android and iOS devices. The research provides a detailed picture of which app categories health insurance companies concentrate on, how many apps they have published, which user groups
Comments about openPR
Your portal is fast, simple, and easy to use. Others may have more functions but they also demand more editing time, you have to preformat the text in order to achieve a good result etc. I think openPR is really fantastic!
Andreas Knepper, wallmedien AG