Glycine crystals can replace piezoelectric ceramics in biology and medicine 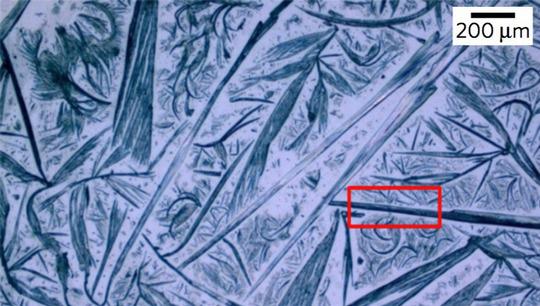 Optical photography of ?-glycine microcrystals grown from an aqueous solution. The area used for measuring the piezoelectric reson

Crystals of glycine under a deformation can produce an electric charge considerably larger than conventional ceramics or a polymer. The scientists of Ural Federal University in collaboration with researchers from Limerick University (Ireland) and University of Aveiro (Portugal) measured piezoelectric coefficients in beta-glycine crystals for the first time and found that their values are comparable with the coefficients in barium titanate or lead zirconate titanate used in the manufacture of piezoelectric transducers and actuators. ‘We found out that effective packing of molecules along certain crystallographic axes and directions in a crystal increases the piezoelectric coefficient. The highest predicted piezoelectric voltage constant for β-glycine crystals is 8 V mN−1, which is an order of magnitude larger than the voltage generated by any currently used ceramic or polymer,’ said one of the authors of the work, Andrei Kholkin, the head of the Laboratory of Nanoscale Ferroelectric Materials, UrFU Institute of Natural Sciences and Mathematics. Modern interest in the use of piezoelectricity (the emergence of electric charge under compression or stretching of materials) in medicine and biology has arisen because of its manifestation in biological molecules, such as synthetic polypeptides or amino acid crystals, including gamma-glycine. The effect was revealed in bone tissue, collagen, elastin and synthetic bone hydroxyapatite. However, the authors of the article note that the piezoelectric coefficients presented in these biological materials are very small, usually in the range of 0.1-10 picometres/volt, and limit their technological application. Glycine is the simplest amino acid. It is a part of many proteins and biologically active compounds; it is used in the pharmaceutical and food industries. Glycine is a classical polymorphic material: under ordinary conditions, it can exist in three different forms: α-, β- and γ-glycine polymorphs, differing in the way the molecules are packaged during crystal growth. Beta-glycine is considered a promising nonlinear optical material. It has many useful optical properties, such as a high value of the coefficient of nonlinear optical susceptibility, a wide window of transparency, a high threshold of destruction. ‘This allows us to consider glycine as a promising material that can be used not only as a piezoelectric transducer (for example, to activate biological processes) but also in biocompatible memory devices, optical switches, gate transistors, etc. Our results open new prospects for such applications,’ explained Andrei Kholkin.Ural Federal University19, Mira St., Ekaterinburg, Russia

06-11-2018 | Science & Education
Ural Federal University
Russian Scientists Build Multiscale Models of Arctic Ice
A team of scientists from the Institute of Natural Sciences and Mathematics, Ural Federal University, Russia, including Piotr Galenko (head of the project), Ilya Starodumov, Irina Nizovtseva, Dmitry Aleksandrov, Aleksey Malygin and others is conducting a multiscale mathematical modelling of the Arctic ice evolution and determining its influence on the climate change. In 2016, the mathematicians received a grant from the Russian Science Foundation for fundamental research. The idea of
06-01-2018 | Science & Education
Ural Federal University
Young Russian Researcher Creates Unique Biomechanical Hand
Fyodor Kotorov, a young researcher at Ural Federal University, Ekaterinburg, Russia, developed a prototype of biomechanical fingers capable of lifting heavy items. The prototype has already passed primary tests with a canister of water. “The idea of designing a mechanical hand came to me when I was watching a series of videos on biomedical engineering achievements, both Russian and international”, said Fyodor in his interview for Oblastnaya Gazeta. “When
01-29-2018 | Energy & Environment
Ural Federal University
Russian Scientists Make Electric-Hydrodynamic Heater More Efficient and Environm …
Scientists from Ural Federal University and Karaganda State Technical University simulated the work of an electric-hydrodynamic heater (EHDH) and proposed a method for its improvement. The resulting installation, which dimensions range from 0.8×1×1 m to 1.5×2×2.5 m, can be used in autonomous heating, hot water and air conditioning systems. The installation is environmentally friendly and easy to maintain; it allows consumers to set their own mode of operation. The results
01-19-2018 | Science & Education
Ural Federal University
Russian Scientists Suggested a New Diagnostic Method for Patients with Disorders …
A team of scientists from Ural Federal University (UrFU) and University of Tübingen studied the peculiarities of classical conditioning in people with disorders of consciousness. The acquired results will help physicians and scientists better predict disease progression in patients, including those in vegetative state. The study was published in Neurobiology of Learning and Memory journal. Disorders of consciousness are conditions in which a person looses an ability to perceive the