“The Bockhampton Road Murders” by Pat Herbert is published 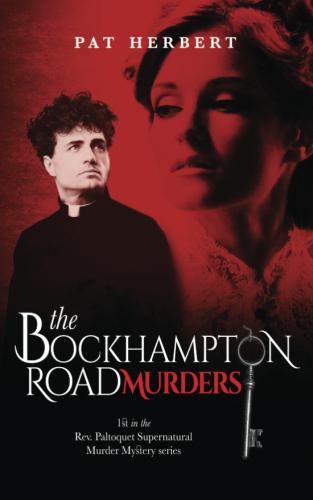 ISBN #978-1944156558“The Bockhampton Road Murders” by Pat HerbertBook 1 (Revised Edition) in the Rev. Paltoquet Supernatural Murder Mystery seriesAbout the Book: Sometimes we're not alone.... What is the dreadful secret hiding behind the front door of an insignificant South London terraced house? Following a triple killing in 1896, a series of murders occur sporadically in the same house, culminating in the murder of the new occupant's girlfriend over a century later. But is there a connection or are they simply coincidences? Rev. Bernard Paltoquet, the vicar of the local parish, is determined to find out. He gradually discovers what links the murders and, with the help of his friends Dr MacTavish and medium Dorothy Plunkett, finally unlocks the mystery that has kept 57 Bockhampton Road in the grip of an unidentifiable evil influence for so many years.OTHER NOVELS IN THE REVEREND PALTOQUET MYSTERY SERIES:Haunted Christmas The Possession of November Jones The Witches of Wandsworth So Long at the Fair The Man Who Was Death The Dark Side of the Mirror Sleeping With the Dead The Corpse Wore Red Seeing DoubleTHE BARNEY CARMICHAEL CRIME SERIES: Getting Away With Murder The Murder in Weeping Lane The Mop and Bucket Murders Also by Pat Herbert:Death Comes Gift WrappedAbout the Author: Pat Herbert lives in London, England. She worked as a typist for a publishing company, based in Blackfriars, then trained to become a Chartered Librarian before working for British Gypsum in London’s West End. She was always interested in returning to publishing and took on the job of PA to the Managing Director of Thomson Books, which owned publishers including Hamish Hamilton, Michael Joseph and Sphere at the time, before they were taken over by Penguin.Since then, Pat worked in recruitment and she is currently working part-time for a private cardiac clinic, and writes during her spare time (with her boss’s permission, of course).Pat loves reading modern crime novels mainly (Peter James, Peter Robinson, Ruth Rendell) and she has an extensive film library. She was brought up in a cinema as her mother was an usherette, and many of her novel lend themselves to the big screen. THE BOCKHAMPTON ROAD MURDERS can be ordered in paperback from Amazon at:https://www.amazon.co.uk/Bockhampton-Murders-Reverend-Paltoquet-supernatural/dp/1944156550 THE BOCKHAMPTON ROAD MURDERS can also be downloaded as an e-book from Amazon at:https://www.amazon.co.uk/Bockhampton-Murders-Reverend-Paltoquet-supernatural-ebook/dp/B07B427GLY Press/media Contact Details:Literary Agent: Darin Jewell, Managing Director, The Inspira Group Literary Agency, 5 Bradley Road, Enfield, England EN3 6ESTel. 0208 292 5163E-mail: darin@theinspiragroup.comThe Inspira Group is a professional literary agency in London, EnglandBradley Road Enfield, Middx. England EN3 6ES

08-10-2018 | Arts & Culture
gisela graf communications
The Törten Project. Murder and Crime Mysteries from a Bauhaus Estate
A different approach to architectural teaching Students develop crime stories set in the Bauhaus Estate in Törten, Dessau Hannes M actually hated straight lines and was secretly in favour of Baroque ornamentation. His granddaughter discloses this secret, putting her life at risk. Meanwhile, a neighbour gets carried away with his zest for renovation and destroys the Amber Room, which had been stored in boxes in his garden shed. Another resident elsewhere
08-04-2016 | Science & Education
OlsenMetrix
THERE'S BEEN A MURDER IN SPACE - NOW WHAT?
Space tourism could soon be a popular way for humanity to take a holiday but legal experts are concerned that criminality in outer space now needs some serious attention. Human spaceflight can vary in size of the crew and mission – in the next few years we could see anything from near-Earth orbit tourist flights to long-term missions to Mars. The engineering, technical and biological problems have been well
05-25-2016 | Politics, Law & Society
McIntyre Thanasides Bringgold Elliott Grimaldi & Guito, P.A.
The murder of Jason Westcott by Tampa Police Department
On May 27, 2014, Jason Westcott was gunned-down by members of the Tampa Police Department while they were executing a search warrant for marijuana based solely on the information from a confidential informant that was never properly vetted or supervised during previous alleged marijuana purchases. This confidential informant, Ronnie Coolge, was a paid informant for the Tampa Police Department with a very checkered history of violent crimes and severe drug
09-19-2011 | Leisure, Entertainment, Miscel …
Peter James
“Dead Like You” by Murder Mystery Author Peter James
The highly anticipated paperback of Dead Like You, the sixth novel in the Detective Superintendent Roy Grace Series by Peter James, is now available in the United States. The novel earned rave reviews and has achieved critical success across the U.K., reaching No.1 in the U.K. hardcover, beating James Patterson, in addition to going straight to No. 1 in paperback. U.S. audiences have eagerly awaited this installment in
01-12-2009 | Leisure, Entertainment, Miscel …
Silver*Ware Studios, Inc.
A Request for a Murder Mystery
An internet short film entitled, “Last Night” created by Producer/Director, Travis Ware, will be reshooting and extending his film into a feature length film for the big screen. The short was a murder mystery about a young black woman named Tausha, played by Tanzania Bauknight. She wakes up the next morning in a bed of blood with no memory of where the blood came from, who the
08-22-2008 | Advertising, Media Consulting, …
BrandOvation
Beijing Murder holds important Clues for 2010
At the preliminary FIFA World Cup™ draw held in November last year in Durban, FIFA general secretary Jerome Valcke stated that “it would be a disaster and a nightmare if something happened to someone during the 2010 FIFA World Cup™”. This nightmare became true for the organizers of the 2008 Olympics in Beijing, when an American tourist and his wife were attacked by a knife wielding suicide killer on the
Comments about openPR
I can't but agree to the positive statements about your portal: easy to use, clear layout, very good search function, and quick editing!
Jens O'Brien, Borgmeier Media Communication