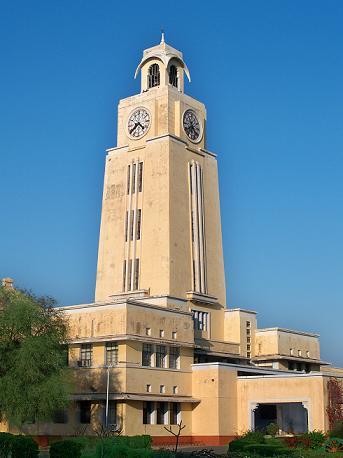 The Birla Institute of Technology and Science - BITS Pilani has been ranked among the top ranking universities along with IITs in various Magazine surveys such as India Today, Outlook, LiveMint etc. BITS was initially accredited by NAAC with 5 Star rating and has recently been reaccredited by NAAC with 3.71 CGPA out of 4 and awarded VERY GOOD status. BITS Pilani has a very strong Alumni Network with Global spread from Australia to America. The Bharat Heavy Electricals Ltd (BHEL), Bhopal which came into existence on 29th August 1956 is the mother plant of Bharat Heavy Electricals Limited, the largest engineering and manufacturing enterprise in India in the energy-related and infrastructure sector, today. In addition to having its own Laboratories for material testing and instrument calibration, BHEL Bhopal has state-of-the-art facilities for manufacture of wide range of electrical equipments and it’s product range includes Hydro, Steam, Marine & Nuclear Turbines, Heat Exchangers, Hydro & Turbo Generators, Transformers, Switchgears, Control gears, Transportation Equipment, Capacitors, Bushings, Electrical Motors, Rectifiers, Oil Drilling Rig Equipments and Diesel Generating sets. The Memorandum of Understanding (MoU) between BITS and BHEL Bhopal was signed on 17 August 2009 with the objective of fostering collaboration between the two institutions to promote academic and research interactions which include participation of BITS in the Human Resource Development needs in the thrust areas of BHEL Bhopal; exchange of scientific information and joint publication of research output and reports; organization of joint seminars / workshops / conferences etc at national and international level in the concerned areas; continuation of support by BHEL Bhopal in the planning, organizing, and implementation of the Practice School (PS) program of BITS, both for the PS-I component of two months duration and the PS-II component of five and a half months duration. Progf G Sundar Dean Practice School Division at Pilani signed the MoU on behalf of BITS while Mr Pawan Goyal AGM (HRD) signed the MoU on behalf of BHEL Bhopal. BITS Pilani since 1973 has made a pioneering contribution for the development of institutionalized linkages between university and industry. The early start evidently helped, for the Institute today, has tie-ups with a large number of companies across the country. In terms of Practice School - I Programme, which is presently implemented for two months at the end of second year for all its campus programmes, the number of industries has grown from 14 stations and 244 students in 1975 to 136 stations and 1404 students in 2008. Practice School I gives the first industrial exposure to the student to understand and appreciate the complexities of the real world operations. In terms of Practice School - II programme which is implemented for five and half months in the final year for all its campus programme students, the number of industries has grown from 1 station and 24 students in 1973 to 139 stations & 1625 students in 2008. Practice School II puts the student to work on real life ongoing projects under professional experts in various organizations. The entire Practice School operation is monitored by a Faculty member of BITS placed at the organization for carrying out the planning, implementation, coordination and evaluation aspects of the programme. The evaluation in Practice School is typically done through quizzes, group discussions, seminars, vivas, project reports apart from Technical Diary and Observation components. In addition to companies from India, organizations from USA, Europe, Middle East and Singapore are participating in the Practice School program. Organizations interested in hosting Practice School for students of BITS may contact Dr G Sundar Dean for Practice School Program at BITS Pilani. Email gisundar@gmail.com Website http://www.bits-pilani.ac.in:12355/In India today, this tie-up of BHEL Bhopal with Birla Institute of Technology and Science (BITS) Pilani marks yet another milestone in industry university collaborations.About BITS: The Birla Institute of Technology & Science, Pilani is a Deemed University (established under Section 3 of the UGC Act, 1956 under notification No. F.12-23/63, U-2 dated 18th June 1964) running educational programs both on-campus as well as off-campus, offering degrees at all three-tiers, namely, Integrated First Degree, Higher Degree and Ph.D. The Institute presently has its campuses at Pilani, Goa and Hyderabad in India and Dubai in UAE.Dr BR Natarajan Professor & Vice President BITS Alumni Association BITS Pilani (Rajasthan) 333013 India Phone 91-1596-242210 Fax 91-1596-244183 Email: brnt(at)bits-pilani.ac.in Website: http://www.bits-pilani.ac.in