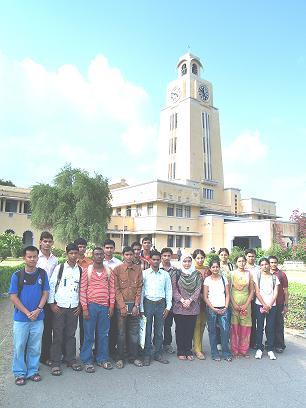 Towering Above the Rest - Board Toppers 2009 at BITS Pilani

Knowingly or unknowingly, every topper invariably takes inspiration from the Zig Ziglar quote ”You were born to win, but to be a winner you must plan to win, prepare to win, and expect to win."The Birla Institute of Technology and Science popularly known as BITS which is a multi-campus university with campuses in India at Pilani (Rajasthan), Goa and Hyderabad and international campus at Dubai (UAE) gets its position among top ranking universities for a variety of reasons. BITS has been accredited by National Assessment and Accreditation Council – NAAC with a CGPA of 3.71 out of 4 and VERY GOOD status. For the year 2009, surveys by leading media giants which include India Today, Outlook and LiveMint have ranked BITS Pilani among top 10 T schools. BITS is well known for its transparency in selection criteria based on the online BITSAT examination for all its degree programs. One special feature of BITS admissions for the past several decades has been the Direct Admission to Board Toppers from different Central and State Boards which has given year after year, a very vital input of highly meritorious students from all over India. It is essential that the Board topper should have taken Mathematics, Physics and Chemistry which must be included in calculating the aggregate. In both the years 2005 and 2006, 27 Board Toppers joined BITS Pilani. Year 2007 had a peak of 31 Board Toppers opting for BITS Pilani while year 2008 had 25 toppers. For year 2009, 27 toppers have taken admissions under this scheme out of which 25 opted for the Pilani campus while one each opted for the Goa and Hyderabad campuses. This year board toppers come from different board which include Andhra Pradesh, Bihar, Chattisgarh, Haryana, Himachal Pradesh, Jammu & Kashmir, Kerala, Madhya Pradesh, Maharashtra, Manipur, Meghalaya, Mizoram, Nagaland, Rajasthan, Tripura, Uttarakhand (Uttaranchal) and Uttar Pradesh. In the freshmen orientation on 30 July 2009, Vice Chancellor Dr LK Maheshwari gave a special welcome to the board toppers who chose to join BITS Pilani for the year 2009.BITS Pilani is a University established vide Sec.3 of the UGC Act, 1956 under notification No. F.12-23/63.U-2 of June 18, 1964.Dr BR Natarajan Professor & Vice President BITSAA BITS Pilani Rajsthan 333031 India Phone 91-1596-242210 Fax 91-1596-244183 Email: brnt@bits-pilani.ac.in Website: http://www.bits-pilani.ac.in


More Releases for Board

01-12-2018 | Logistics & Transport
IVU Traffic Technologies AG
IVU expands Executive Board
Leon Struijk to manage Projects and Sales as CCO Berlin, 12 January 2018 – IVU Traffic Technologies AG is expanding its Executive Board: Effective 1 February 2018, Leon Struijk will join the managing body of the Berlin-based IT specialist for public transport. Besides CEO Martin Müller-Elschner and CTO Matthias Rust, he will be CCO (Chief Customer Officer) with responsibility for Projects and Sales. Leon Struijk (47) comes from the Netherlands, where he
10-26-2017 | Tourism, Cars, Traffic
ReportsWeb
Tourism Board Marketing Board Marketing Index
ReportsWeb.com published “Tourism Board Marketing Market” from its database. The report covers the market landscape and its growth prospects over the coming years. The report also includes a discussion of the key vendors operating in this market. Publisher's "Tourism Board Marketing Index", measures the marketing efforts of 100 tourism boards around the world. The Tourism Board Marketing Index provides an insight into the individual marketing performance of different tourist boards. To compile
02-22-2017 | Science & Education
Reporthive
Global Led Writing Board
Global Led Writing Board: Led Writing Board Report by Material, Application, and Geography – Global Forecast to 2021 is a professional and in-depth research report on the world's major regional market conditions, focusing on the main regions (North America, Europe and Asia-Pacific) and the main countries (United States, Germany, united Kingdom, Japan, South Korea and China). For sample report: http://www.reporthive.com/request-sample.php?id=809563 The report firstly introduced the Led Writing Board basics: definitions, classifications, applications and
11-29-2016 | Business, Economy, Finances, B …
ReportsWorldwide
High-Speed Board-to-Board Connectors
ReportsWorldwide has announced the addition of a new report title High-Speed Board-to-Board Connectors to its growing collection of premium market research reports. Bishop & Associates research report, High-Speed Board-to-Board Connectors, analyzes high-speed connectors used to connect boards, memory modules, hard drives and solid-state drives in electronic systems and how these connectors are changing as a result of new data center and communications architectures. • What are the market drivers that influence the
12-23-2013 | Science & Education
iversity
iversity creates Advisory Board
Bernau bei Berlin, 18 December 2013 – To prepare for the successful expansion of its online learning platform, iversity announces the creation of an independent advisory board. The founding members include former iversity CEO, Marcus Riecke, who will be joined by Jörg Dräger, PhD, managing director of the CHE (Centre for Higher Education). Additional members will be named in the months to come. Among other duties, the board will
01-25-2011 | Industry, Real Estate & Constr …
TCAR
TCAR Elects 2011 Board
RALEIGH, N.C. (January 24, 2011) – TCAR, the Triangle Commercial Association of REALTORS®, announces today its 2011 board of directors. The organization serves real estate practitioners, appraisers, property managers and other professionals within a 14-county area. 2011 board members include: Executive Committee Shane Bull, Grubb & Ellis, President Bret Muller, Capital Associates, Past President Kerry Saunders, NAI Carolantic Realty, Inc., President-Elect Henry Ward, York Properties, Treasurer Joni Barnes, Pinpoint Properties Kim Brennan, Executive Officer Christina Coffey, Hunter & Associates Kathy
Comments about openPR
OpenPR ist the nicest and most clearly laid out PR platform I have seen to this day. The press releases are displayed very nicely and clearly and without any unnecessary frills. The updates are fast and the finished release looks appealing and is clearly legible. Even with 16 years of experience one discovers new things from time to time. Congratulations!
Gabriele Ketterl, Director Marketing & PR, Menads