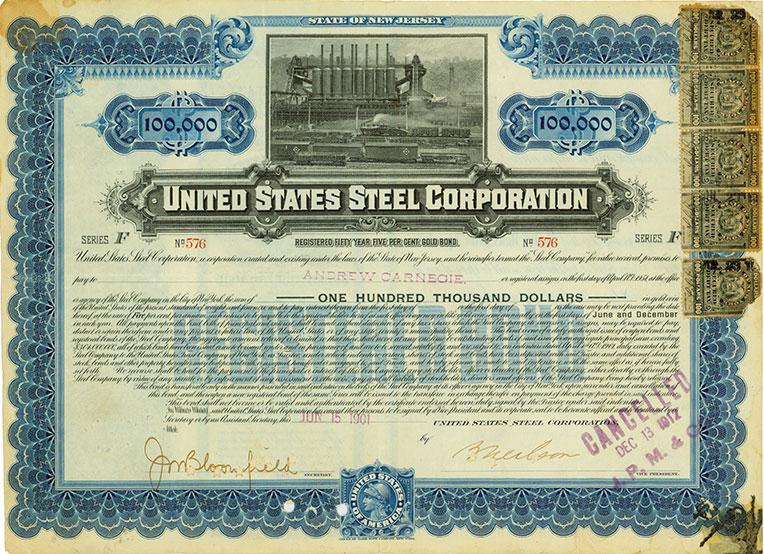 928 old stocks and bonds are currently offered at the 47th Scripophily auction by HWPH Historisches Wertpapierhaus AG, and will be sold on 20 January 2018 in Wuerzburg, Germany (the auction starts at 11.00 am, viewing is from 9.00 am onwards, catalogue at www.hwph.de). The highlight of the auction is one of the most important historic stock certificates in financial history: A bond issued by the United States Steel Corporation (Lot 563), to Andrew Carnegie and endorsed on the back by him at the financial height of the world’s third richest man at the time, and transferred later to his philanthropically masterpiece! A US Steel bond signed by Andrew Carnegie was sold for US-$ 125,000 in 2000. One of the Top 10 certificates in Scripophily. Minimum bid is Euro 25,000 (approximately US-$ 30,000).Andrew Carnegie was born in Dunfermline (Scotland) as the son of a weaver. In 1848, he emigrated to Pennsylvania with his parents. At the age 13 Carnegie already started to work as a winder in a cotton mill. A year later, he switched to a telegraph position in Pittsburgh and learned how to cable. Here he was discovered by the head of the Western Division, Thomas A. Scott. After several years of apprenticeship with the Pennsylvania Railroad, in 1865, Carnegie turned towards the steel industry which was expanding at an explosive rate. Carnegie built his first own furnace in 1870, and his first steel works three years later. He merged his companies with the company of Henry Clay Frick in 1881. Frick became CEO of the company in 1889. He combined all assets in the Carnegie Steel Company in 1892. The Carnegie Steel Company was the largest steel manufacturer of the world at that time. In 1899, after an argument with Frick, Carnegie bought Frick’s stake for US-$ 15 millions. In 1901, he sold his steel corporation for US-$ 480 millions to John P. Morgan, who converted the company into the steel trust U.S. Steel. After this deal, Carnegie retired completely from business, became a writer and devoted himself to his philanthropic foundation. Next to Rockefeller, Astor, Vanderbilt and Morgan, Carnegie was considered one of the Big Five in American economic history. Andrew Carnegie received the offered bond for the transfer of his Carnegie Steel into the United States Steel Company. He transferred the bond to the Andrew Carnegie Free Library of Carnegie, Pa. on 12 December 1912. This bond is the one and only of the roughly known eight bonds with Carnegie signature, which was transferred to the Free Library!You can bid live at: http://bit.ly/2Dmzx9n !About historic shares and bonds: Historic shares and bonds are financial documents which no longer have any traditional economic value on any stock market. They are collectable items reflecting our financial history. For top items, such as for instance certificates personally signed by John D. Rockefeller, Thomas A. Edison, Charlie Chaplin, Wolfgang von Goethe or Richard Wager, 5-digit prices are being paid.HWPH Historisches Wertpapierhaus AG is one of the world leading auction houses for old stocks and bonds (Scripophily).HWPH AG Matthias Schmitt Ingelsberg 17b 85604 Zorneding / Germany Telefon: +49-(0)8106/246186 E-Mail: auktion@hwph.de Internet: www.hwph.de

You can edit or delete your press release Top 10 Historic Bond, signed by Andrew Carnegie, at auction! here