Are you infected with “fear of being wrong” phobia? 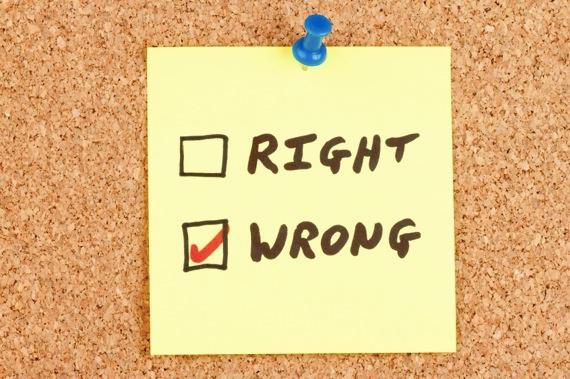 Many of us do not like to admit that we are in the wrong. The power of being ‘right’ takes control of your judgement, turns into an obsession, an irrational fear which could put pressure on yourself or put a strain on many relationships.Fear of being wrongWe all try to avoid making mistakes at all costs. But what if being wrong is actually the first step of being right? Kathryn Schulz, the writer at The New Yorker and a self-proclaimed "Wrongologist", spent five years researching what would happen if things are done wrong. According to Kathryn, “when we try to be right all the time, it might mean that we're doing it, well, all wrong.”Let’s pause and think for a moment whether you frequently encounter the listed below thoughts and pay extra attention if you notice they are indeed on the rise.You are afraid of being fired, demoted, or criticisedYou are fixated on only one path: the correct one, and you steer clear of any other path simply because you do not want to suffer the consequences. People who live in fear of being fired tend to mask their true feelings and just go with the flow even when these requests are unreasonable. You don’t want others to think you are incompetentEven at a young age, we were taught to always get good grades, a fail in a test would result in an unsuccessful future. If it was a mistake made due to the lack of experience, then you won’t be so hard on yourself. However, if you are an expert in the field, you always take pride in it, then making a mistake feels pretty much like your ego is shattered. You would blame yourself thinking if you can’t do this right then there’s nothing else you could do.The mistake would ruin your reputationYou are a perfectionist and having a mistake in your list among other perfectly great things likes a spec of dirt on a white canvas. You view your mistake as unacceptable, you’re no longer the expert.Being wrong does not make you look bad, it makes you a human. Without trials and errors, there would not be innovations as we all know today: no internet, no mobile phones, no medical advancements, nobody landed on the moon, etc. Do you know what the percentage of loss profit start-ups make during their first 2 years is? It is a number that guarantees to upset anyone.Yes, no one likes to be proven wrong but pressuring yourself is not the right choice either. Pressuring yourself will not improve your productivity. Researches have shown that productivity increases in accordance with pressure until they reach equilibrium, then they will decline. It is also worth noted that when you try your hardest to stay away from mistakes, that is when you are most prone to errors.ABOUT TRG INTERNATIONAL TRG International is an IT, Talent and F&B company. We help people and businesses to shine. We help people be the best they can possibly be by selecting the right people for the right job and developing them to their full potential. We help companies by providing an IT solution that works quietly and brilliantly in the background, freeing them up to focus on their core and not having to worry about their IT systems. We do this for more than 1,000 clients in 80 countries. Learn more at: www.trginternational.comContact-Details: Ngoc Doan PR Communication Officer 2nd Floor, 145 – 147 Nguyen Co Thach Street, An Loi Dong Ward, District 2 Ho Chi Minh City, Vietnam ngoc.doan@trginternaltional.com https://www.trginternational.com/2nd Floor, 145 – 147 Nguyen Co Thach Street, An Loi Dong Ward, District 2

You can edit or delete your press release Are you infected with “fear of being wrong” phobia? here

08-20-2020 | Associations & Organizations
Brenda's Beauty Angels
Brenda's Beauty Angels Welcomes New Board Member
Indianapolis, Indiana (August 19, 2020) – Brenda’s Beauty Angels, a nonprofit dedicated to enhancing the quality of life of the elderly, the seriously ill and their caretakers through beauty services, is happy to announce the appointment of Krishaun Burns as Director of Social Media of its Board of Directors, effective immediately. Burns is the first social media director for Brenda’s Beauty Angels, which was established in 2019, following the passing of
05-07-2018 | Leisure, Entertainment, Miscel …
EAC Network
Newsday Charities, a McCormick Foundation Fund, Grants $40,000 to Combat Child A …
Local human service agency EAC Network is proud to be the recipient of a $40,000 grant through Newsday Charities, a McCormick Foundation fund, in support of its Long Island Parenting Institute (LIPI), which enhances outcomes for children by strengthening families and empowering mothers and fathers to become confident and effective parents. This is the sixth consecutive year that Newsday Charities has dedicated funding to LIPI; previous support included a number of
07-04-2016 | Leisure, Entertainment, Miscel …
Dreaming Big Publications
NEW RELEASE! Get ready for goosebumps with The Bacchanal and Other Horrific Tale …
A babysitting job gone horribly wrong. An artist whose love for his wife has horrific results. A talent agency that promises success no matter what, even if you are the one standing in the way. Humanity’s fear of the unknown and fascination with the supernatural are masterfully depicted in these eleven stories by authors such as Donald McCarthy, Kathryn M. Hearst, and Teel James Glenn. Though the supernatural elements are the
03-06-2013 | Politics, Law & Society
Dallas Bar Association
Dallas Bar Association Hosts Fan Drive
WHAT: The Dallas Bar Association’s Community Involvement Committee, is holding a fan drive to help “beat the heat” this summer for the poor, elderly and disabled in Dallas County. • In 2011, rising inside temperatures claimed 31 Dallas County lives and caused countless suffering among the poor, elderly, and disabled. • In each case, a fan or window unit would have helped make a life-changing difference. • Heat-related illnesses are preventable! The DBA’s Community Involvement Committee, led
02-09-2012 | Arts & Culture
CONTESA Charity
CONTESA Announces Enhanced Education Sponsorship Programme for AIDS Orphans in Z …
8th February 2012, Bournemouth: CONTESA a UK registered charity which supports AID orphans in Zambia has today announced the enhancement of the CONTESA Education Sponsorship Programme, which will sponsor the secondary education of students from Kabwe Futures Community School and Messiah Mission Community School in Lusaka. The programme was created to assist students leaving community schools after grade 9 to enter government schools that require fees to be paid for tuition,
03-28-2011 | Arts & Culture
Word Alive Press
A Life on the Edge
In The Watcher, the 2010 Word Alive Press Fiction Winner, novelist Sara Davison explores God’s grace and one woman’s willingness to forgive Waterloo, ON - For Kathryn Ellison, the quiet life of a single mother is filled with bittersweet joy, pride in her daughter, Lexi, and the comfort of belonging to a close-knit ranching family in British Columbia. There is also the tantalizing promise of romance, if only she can
Comments about openPR
Your portal is fast, simple, and easy to use. Others may have more functions but they also demand more editing time, you have to preformat the text in order to achieve a good result etc. I think openPR is really fantastic!
Andreas Knepper, wallmedien AG