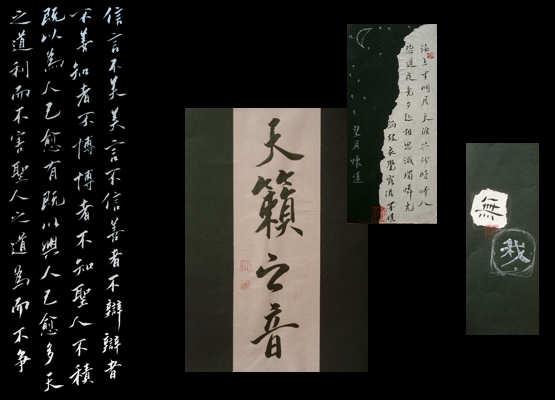 Derived from the Greek words for "beauty" and "writing", calligraphy is a very old art. Usually the necessary tools for writing calligraphy are paper, quill and ink. Chinese Calligraphy is based on Chinese characters that are handwritten on paper as well as bones and plates of clay or stone using a brush or a knife (seal carving). In the broader sense calligraphy is a play of brush strokes both, in the East and the West. The play of contrasts, curves, shapes and structure inspires rhythm and harmony in the eye of the beholder. Fantasy creates various ideas about what is perceived. Even if you do not know the language, you nevertheless experience a pleasant and enjoyable sentiment. Western Calligraphy quite often is influenced by practicalities that at the same time pose limitations. Such calligraphy is very "clear" and "fine", but at the same time that is all it is. You always are able to make small corrections and can even use a ruler to create perfect writing. Hence it is much easier to have it written with a computer. In China calligraphy is mainly considered as a kind of mental kung fu. It is an art that shapes your personality. Besides the apparent and visible beauty Chinese Calligraphy is a true reflection of the heart. "An elemental flow where single brush strokes disappear and become part of a unique entity". Chinese Calligraphy is written with one singular stroke of the brush. It is not embellished unnecessarily as this would disrupt the energy of the writing. On the highest level Chinese Calligraphy is written subconsciously and spontaneously. To achieve this you not only need intensive writing training but moreover a profound understanding of Chinese philosophy and esthetics which you have to be able to transform into a personal interpretation of yours. The theory of Chinese Calligraphy says: "The upright brush needs a pure and sincere mind." Exactly with this in mind the Chinese write calligraphy for more than thousand years with just a brush and no other auxiliary means. This shows a close connection between the strokes of the brush and ethics, between philosophy and esthetics. Sometimes it is not quite clear why you are drawn to Chinese Calligraphy. Is it just the art or is it what is behind it perhaps – the Chinese philosophy and culture. These characteristics of Chinese Calligraphy strongly determine its future. It is not just dominated by the artists only and will not just linger in museums or libraries. It is always alive with those people interested in Chinese culture and will always be part of education in China. Chinese Calligraphy will live on through those little hands of the children who just began to write their first Chinese characters. By Yingru (yingru.com)Yingru.com presents works of art created by Yingru and provides insights into the essence of Chinese Calligraphy. In addition to the presentation of works of art and background information interactive applications like myspace and twitter have been integrated so that everyone interested in the art of calligraphy is able to get in touch and stay in touch.Yingru.com Ulmenstrasse, 1140 Vienna, Austria +43-664-1607865 http://www.yingru.com yingru@live.at

09-07-2017 | Advertising, Media Consulting, …
MarketResearchReports.biz
Chinese Influence on Global Infrastructure
"The Latest Research Report Chinese Influence on Global Infrastructure provides information on pricing, market analysis, shares, forecast, and company profiles for key industry participants. - MarketResearchReports.biz" About Chinese Influence Market This report outlines and analyzes all infrastructure projects around the world in which Chinese companies including owners, financers, and contractors are involved. Summary Throughout the 21st century, China has been a world leader in expanding its infrastructure base, creating the worlds largest high-speed rail
09-06-2012 | Business, Economy, Finances, B …
Chance & Bridge Partners
Chinese Investors Look Abroad
Beijing, China July 30, 2012 – An Outbound Investment Seminar hosted by Chance & Bridge Partners drew a large audience of investors, Chinese SMEs, and international partner law firms. Many Chinese investors and companies are looking to diversify their holdings and enter new markets. This has led to an increase in cross-border investment, banking, consulting, and legal services for the Chinese clients. Many of these areas were addressed during the
01-14-2011 | IT, New Media & Software
Host1Plus
Host1Plus enters Chinese market
London, United Kingdom, January 14, 2011 - Host1Plus, a London based international hosting company has started its operations in Chinese market. The services will be managed from Singapore. Host1Plus has contracted with one of the best data centers in Singapore. This deal allows Host1Plus providing the locally bases services in main language of China. The Chinese support will operate 24/7. The Chinese version of the website is http://cn.host1plus.com in Chinese Simplified
04-27-2010 | Energy & Environment
MWM GmbH
MWM ‒ Chinese Web Site Online
Mannheim, April 26, 2010 In mid-April, a new Web site of MWM GmbH in Chinese went live. However, the new domain with the Internet address mwm.cn is not merely a Chinese translation of the corporate Web site mwm.net. In addition to general information about the Mannheim-based company, the site also features special content elements for the Chinese market. The site contents are also available in English. MWM, a tradition-rich company established
10-07-2008 | Business, Economy, Finances, B …
Questrade Inc.
Questrade launches Chinese outreach initiative
Toronto, ON (October 8th, 2008) – Questrade Inc. today announced a new initiative for the Chinese-speaking community. This includes: the Questrade corporate website in traditional and simplified Chinese. The site includes pricing and rates, trading platforms, investment products and services, security and privacy, and contact information. Also available is Questrade’s live help tool, which allows clients to chat instantly online with client services representatives in simplified and traditional Chinese. Edward
08-19-2008 | Energy & Environment
Article 13
Chinese companies applying CSR principles
Article 13, the leading corporate social responsibility consultancy, is profiling examples of Chinese organisations applying CSR principles on its website. These case studies are part of the company’s latest feature exploring sustainability risks presented by the burgeoning Chinese economy and show that some companies are addressing sustainability issues, despite the gloom and doom predictions. The case studies include examples of carbon emissions reduction initiatives promoted by the Industrial Bank of
Comments about openPR
Your portal is fast, simple, and easy to use. Others may have more functions but they also demand more editing time, you have to preformat the text in order to achieve a good result etc. I think openPR is really fantastic!
Andreas Knepper, wallmedien AG