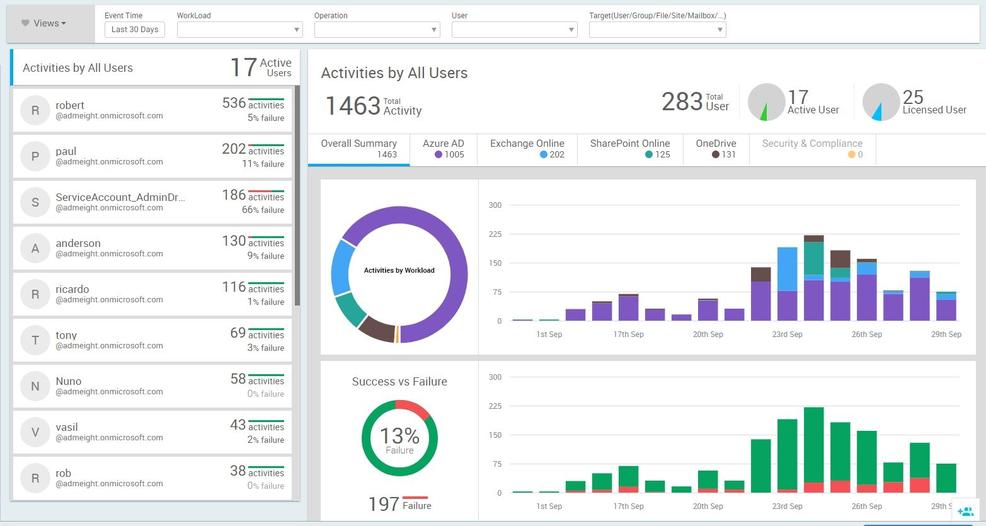 AdminDroid, the company dedicated to solving IT administrators’ challenges, today announced that its flagship product AdminDroid Office 365 Reporter solution now includes Office 365 Auditing Reports and Analytics. This new version helps the administrators to visualize the activities happen inside their Office 365 environment in a clear way. The auditing dashboards show the summarized activities performed on Office 365 applications such as Azure AD, Exchange Online, SharePoint Online, OneDrive and Security & Compliance Center. Using this powerful tool, IT administrators will not only be able to extract rich Office 365 auditing reports and statistics, but can also schedule the reports and have them emailed at selected intervals.AdminDroid adds Microsoft Teams Auditing Reports and Usage Tracking.Microsoft Teams is a team communication service available in Office 365 which helps organization people to communicate and collaborate with themselves. As more people are moving towards Microsoft Teams from Skype and Yammer, IT admins need to keep track of usage across their organization's departments.AdminDroid O365 Reporter comes handy for IT admins who want to measure the Microsoft Teams usage in their organization. It helps to find the Teams usage across organization's departments, cities, states or people's designations. Also, the auditing reports help to take control of Microsoft Teams' channels, bots, connectors, tabs, etc.Easily Measure Microsoft Teams Adoption with AdminDroid The Usage & Adoption dashboard helps the admins to get the Microsoft Teams adoption metrics using a few mouse clicks. Also, the auditing reports make it is easy to monitor the users activities in Microsoft Teams services.· Microsoft Teams Logins – Keep track of user logins and monitor the devices used to access Microsoft Teams. · AddOn Management – Monitor the Bots, Connectors, and Tabs which are added or removed to various Channels. · Teams Configuration Changes – Monitor all the settings changes applied to various Teams and Channels. · Teams Management – Monitor management activities such as creation, deletion on Teams and Channels.AdminDroid Reporting Capabilities HighlightsAdminDroid Office 365 Reporter comes with advanced reporting capabilities which make tedious reporting task to an easier one.· Automatic Schedule – Schedule one or more reports to run automatically at configured time and delivered straight to your preferred mail-ids. · Rich Filters – Apply filter on any columns to see only the required information and save the filter for future use. · Easy Customization – Allow you to easily customize the reports by rearranging, adding or removing the columns and its size. · Report Export – Ability to export the reports to CSV, PDF, HTML, XLS or XLSX.For more information about the release: http://admindroid.com/office-365-reporter-release-notesDownload the product: http://admindroid.com/downloadAbout AdminDroidAdminDroid is a leading Office 365 solution provider whose objective is to build IT products that are highly user-friendly and discerning solutions. The solutions built by AdminDroid are always making everyone's life easier, and more productive. The flagship product AdminDroid Office 365 Reporter tool has been trusted by more than 2500 companies around 90+ countries and it has managed over 5 millions of Office 365 users so far.AdminDroid Solutions, 28, Shri Kalyani apartments, 6th cross, Kodihalli, Bangalore - 560017 website: www.admindroid.com email: support@admindroid.com