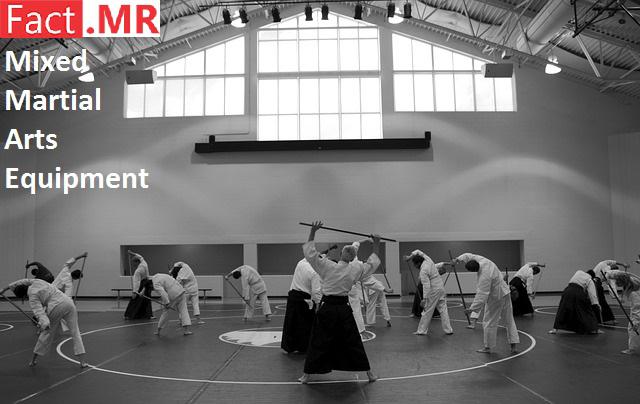 Mixed martial arts can be said to be the fastest growing sport in several countries worldwide owing to rising popularity of fighting styles and other professional leagues, such as, the World Series of Fighting. Development of new technologies has made it possible to track the performance of the player in combat thereby identifying key development areas. New tracking technology supported with essential gear is the recent found trend in combat sports, which is used to monitor speed and reflex actions. Tracking technology is installed in equipment or gear such as gloves, punching bags, hand wraps etc. Moreover, people are choosing mixed martial arts as career and for recreation purposes or for self-defense. This has prompted the growth of the global mixed martial arts equipment market. Technological developments have given birth to robust equipment with which a combat player can be trained well, enhancing combat skills and abilities. Also, a protection aspect comes in the picture when mixed martial arts equipment is concerned. Other factors which have fuelled the growth of the mixed martial arts equipment market are rising popularity of the sport, increasing number of MMA (Mixed Martial Arts) tournaments and inclusion of MMA in several fitness programs. North America region shows higher attractiveness for this market.Click Here For Sample Report @ https://www.factmr.com/connectus/sample?flag=S&rep_id=239MMA or mixed martial arts is a combat sport which involves both striking and grappling, using techniques from martial arts and other combat sports. The sport has rivaled professional wrestling and boxing and has witnessed an increased popularity with a pay per view business model. Various styles have been developed across regions with their uniqueness. Various MMA equipment such as mouthpiece, gloves, hand wraps, head gear, shin guards, etc., are used during combat.According to Fact.MR’s research report on the global mixed martial arts equipment market, the market is anticipated to reach a value of about US$ 565 Mn by 2022 reflecting a moderate CAGR during the forecasted period of 2017-2022.North America dominates the Global Market North America region shows higher market attractiveness index and is considered to be the most lucrative region for the global mixed martial arts equipment market. The rise of the sport in this region along with technological advancements and higher disposable incomes of people have contributed to the growth of the market in this region. North America region has shown higher market share by revenue and is expected to follow this trend by the end of 2022 and is poised to register a moderate CAGR during the period of forecast.MEA and Europe have a Tie; Opportunity from an Investment Standpoint? Europe and Middle and Africa region (MEA) show same growth rate and are poised to the fastest growing regions registering a high CAGR of 4.7% during the period of forecast, followed by Asia Pacific excluding Japan (APEJ), which is the second fast growing region in the global mixed martial arts equipment market. Investments can be made in these regions, even though the market share is less as compared to North America region, there is potential for positive growth in these regions.Gloves Segment Show High Pace and Strength Gloves segment by product type show high market growth rate and higher market share during the period of forecast 2017 to 2022. The gloves segment is anticipated to grow at a higher CAGR of 4.8% throughout the forecast period. This segment dominates the global mixed martial arts equipment market by product type as of 2017 and this trend is expected to continue throughout the forecast period. This segment is also expected to gain a higher BPS by the end of 2022.Tough Call Between Punching Bags and Head Gear Punching bags segment and head gear segment by product type show a similar growth rate during the period of forecast. However, following gloves segment, the punching bags segment are second in line as far as market share is concerned and their market value is higher than that of head gear segment as of 2017. The head gear segment is anticipated to experience zero gain in BPS by the end of 2022.Independent Sports Outlet to Show Dominance Independent sports outlet segment by sales channel is expected to show higher growth rate during the forecast period and a higher market share thereby dominating the global mixed martial arts equipment market by sales channel category. The segment is poised to grow at a CAGR of 4.9% throughout the forecast period and is also expected to gain a high BPS by the end of 2022. Following independent sports outlet segment, is the franchised sports outlet segment which is second as far as growth rate is concerned. The modern trade channels segment and third party online channel segment show are expected to show same growth rate throughout the period of forecast of 2017 to 2022.Individual Segment to Grow Fast Individual segment by buyer type is poised to grow at a higher CAGR of 4.8% during the forecast period and also reflects a higher market share as of 2017. This trend is poised to continue or even grow by the end of 2022; thus it can be inferred that this segment is expected to dominate the global market by buyer type throughout the period of forecast. This segment is also anticipated to reflect a higher gain in BPS by the end of 2022.Browse Full Report with TOC @ https://www.factmr.com/report/239/mixed-martial-arts-equipment-marketCompetition Tracking The report also profiles companies that are expected to remain active in the expansion of the global mixed martial arts equipment market through 2022, which include Adidas AG, Century LLC, Everlast Worldwide, Inc., Hayabusa Fightwear Inc., Combat Sports Inc., Twins Special Co. LTD., Fairtex, King Professional, Title Boxing, LLC and Ringside, Inc.Check Discount @ https://www.factmr.com/report/239/mixed-martial-arts-equipment-marketAbout Fact.MR Fact.MR is a fast-growing market research firm that offers the most comprehensive suite of syndicated and customized market research reports. We believe transformative intelligence can educate and inspire businesses to make smarter decisions. We know the limitations of the one-size-fits-all approach; that's why we publish multi-industry global, regional, and country-specific research reports.Contact UsFact.MR 11140 Rockville Pike Suite 400 Rockville, MD 20852 United States Email: sales@factmr.com Web: https://www.factmr.com/