MakeCity 2018 – The Festival For Architecture And Urban Alternatives: The Second Chapter In Berlin 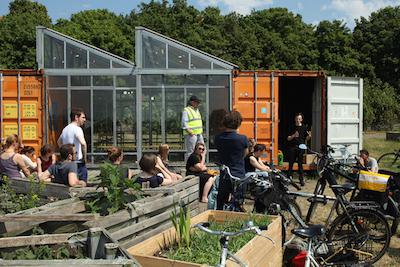 Berlin will set the stage for the second international Festival for Architecture and Urban Alterna-tives in 2018. The 17 day programme takes place throughout the city from 14th June – 1st July. Over 120 exhibitions, workshops, Make City Open curated tours and Studio Talks are being de-veloped together with numerous partners and co-designers. MakeCity’s international programme is devised in and out of the current climate in Berlin. The framework of this contemporary city and the rapid changes underway here on every level ¬– gov-ernmental, civic, spatial and architectural – sets the stage for a resolutely trans-sectoral and trans-disciplinary approach.Berlin Remixing is both an ideal and a goal – to build bridges in the urban discourse between often starkly polarised positions. To encourage critical debate and new perspectives. To offer alternatives to the top-down vs. bottom up discourse on city making. Throughout Europe, the financial crisis has led to a fundamental and long-term rethink on the civic economy. Austerity economics have led to drastically cutbacks in social and public services. This has increasingly called forth a far greater level of civic engagement – and with it alternative economic models for regeneration in cities. MakeCity intends to reflect new coalitions between civic movements, municipalities, urban planners and pro-gressive developers that are paving the way for the reactivation of a social contract for urban change. The festival features new architecture and new typologies and design processes that reflect such paradigm shifts.Berlin’s cross-party coalition has enshrined a clear social agenda in its political contract that in-cludes far-reaching targets for new social housing, mixed use and the reactivation of ground floor spaces. The city is growing by 40 000 inhabitants a year. The coalition contract aims to contribute to social, cultural interaction and local urban production. Municipalities are reacting to rampant prop-erty speculation in the city by buying back properties and safeguarding them. Major publicly owned sites are to be developed in future together with civic initiatives. This is the backdrop for the international exchange during Berlin Remixing. We will look at innova-tive design strategies for cultural diversity in cities, affordable housing and mixed-use develop-ments; in short, innovative ways of keeping urban production within the central city fabric – all of which seek to enrich local urban districts. The European network activated for the MakeCity programme should innovate and inspire change within the world of both state-driven, citizen-led, and private urban development.The festival is being shaped by way of workshops with partners and co-designers of the pro-gramme. MakeCity will be built around three core themes: Rethinking Structures / Processes for circular systems and urban design. The circular economy begins in cities, and the featured projects will show how we can tackle the over-consumption of resources by creating regenerative cycles in urban systems and our material economies. Urban / Nature: the interweaving of the urban and the natural environment. We will build upon the discourse on urban commons and urban landscapes that fuelled MakeCity in 2015. Projects will feature micro-communities and civic initiatives that have evolved from a deeper understanding of our green infrastructures. Architecture / Space: in-novative programmes and projects that remix user models and materials. Berlin Remixing will re-flect the ways in which paradigm shifts in society’s values are reflected in the built spaces of cities; in new typologies, adaptable architecture, and ground-breaking strategies of reuse.MakeCity is supported in 2018 by the German Lottery Foundation and the Berlin Senate. Numerous Patrons and founding partners contribute financially to the festival. The Senator for Urban Devel-opment and Housing, Katrin Lompscher anticipates that “with its trans-disciplinary dialogues and debates, MakeCity offers initiatives, citizens, political, cultural and economic protagonists and mu-nicipalities the opportunity to engage and inspire one another – and to improve their networks in the interests of forward-thinking and constructive urban development.” The Chamber of Architects is a major partner, and MakeCity frames the Day of Architecture in Berlin. According to Sebastian Beck, project curator for the VHW, the Federal Association for Urban Development: “Urban Devel-opment is increasingly about governance, involving engaged civic urban developers: a galvanised civic society. MakeCity is a Platform with which to advance the debate on the contours of contem-porary urban governance.”The MakeCity festival will feature four main formats: The Festival Centre (at the Czech cultural centre in Berlin Mitte) will consolidate the international discourse around the core themes over 9 of the 17 festival days. Urban Hubs are larger-scale cultural and architectural sites featuring their own curated exhibitions and events. Make City Open will feature curated tours, walking debates and Open House visits to new built projects throughout Berlin. Studio Talks, devised by the participat-ing architecture and urban design practices, will give insight into working methods and strategies.MakeCity 2018 is also conceived together with a curatorial advisory board made up of experts in new materials, wood-built urban architecture, open workshops and mixed use, participation, urban food production and the circular economy.For further information please see the website www.makecity.berlin For press inquiries contact Press@make-shift.info Phone: +49 (0) 163 25 39 269The core festival organisation of MakeCity is an independent non-profit limited company, supported by founding partners, commercial sponsors and architectural associations at local and federal level. MAKE_SHIFT gGmbH is responsible for the festival management, conceptual development with partners, the communication strategy, the allocation of funding, the acquisition of partners and sponsors, the coordination and visualization of all associated events.Make_Shift gGmbH Francesca Ferguson Oderberger Straße 9 10435 Berlin Tel.: + 49 (0)30 5300057 92 press@make-shift.info

You can edit or delete your press release MakeCity 2018 – The Festival For Architecture And Urban Alternatives: The Second Chapter In Berlin here

09-04-2018 | Science & Education
Fraunhofer IAO
Food for the city - from the city
Fraunhofer IAO publishes study on urban farming Whereas the number of people living in cities worldwide is continually growing, the already scarce area used for growing food and resources has been steadily shrinking. This disparity, however, can be partly bridged by urban farming, the practice of growing food in cities and urban areas. Fraunhofer IAO has published a study investigating how cities could benefit from locally grown food and resources, looking
07-12-2017 | Advertising, Media Consulting, …
ReportsWeb
City Travel Briefing: Paris
Paris has been resilient as one of the world's leading tourist destinations despite a host of challenges related to security, accommodation and overcrowding. With a clear focus on reinventing the city for the modern traveller by transforming its infrastructure, culture and attractions, Paris is well placed to compete with emerging cities vying to become the tourist destination of choice. This report outlines Paris's strategy in attracting new (and old) holidaymakers
10-26-2016 | Tourism, Cars, Traffic
Russia Incoming Tour Company
ST. PETERSBURG CITY TOUR
Duration: 3 hours Restrictions: Available every day The price includes: Private transport & English, German, French or Spanish speaking guide Specifications: Guides with other languages are available though there may be a price variation Price note: For groups of more than 10 pax, price will be given upon request Private St. Petersburg City Tour is a great chance to acquaint you with top historical, architectural and vintage sights of the city along with a history
03-06-2014 | Tourism, Cars, Traffic
Fraunhofer IAO
Manufacturing in the City?
Urban manufacturing is not just good for companies What strategies and concepts are required to ensure city-based manufacturing gives all its stakeholders added value? The Urban Production innovation network brings Fraunhofer IAO together with partners to develop new approaches for urban manufacturing. Global trends such as the world’s growing population, ongoing urbanization and our increasing awareness that raw materials are a finite resource are forcing us to find ways to make
12-10-2011 | Advertising, Media Consulting, …
Kansas City Printing
Kansas City Printing
Lenexa, KS – Colorstar Printing, a Kansas City printing & direct mail marketing company, today announced the launched of a newly re-developed website. Colorstar Printing has been a leading provider of commercial printing and direct mail marketing services in Kansas City since 1998. Small, medium and even Fortune 500 companies have selected Colorstar as a cost effective solution to outsource their printing needs. The company provides business
04-02-2009 | IT, New Media & Software
LINK Development
Luxor city portal - first official city portal in Egypt
(31 March, 2009) – Tourists anywhere in the world who wish to find out more about Luxor before their visit to this city of wonders can now avail of a wide range of online services and information with the launch of the Luxor portal, developed and designed by LINK Development in association with Microsoft Egypt. The first official city portal in Egypt (luxoregypt.org) which was inaugurated during an official visit by
Comments about openPR
Your portal is fast, simple, and easy to use. Others may have more functions but they also demand more editing time, you have to preformat the text in order to achieve a good result etc. I think openPR is really fantastic!
Andreas Knepper, wallmedien AG