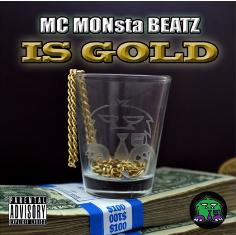 “Music makes the world go around” – this is justified in every way now. In the ever-changing world of music, there are some genres that have made a huge impact. Amongst all the popular music genres – hip hop and rap have been popular with many bands and artists. They are embracing it and creating magical compositions that is gaining popularity across the globe. If you are looking for creative hip hop and rap song listen to Corey Mc Monsta Mills – “Is Gold”. He is an amazing music producer and recording artist from Union, New Jersey, who is making songs since 2007.MC Monsta Beatz is his stage name and he has so far produced house, dubstep, rap beats and several other styles of hip hop. If you want to witness a spacious rhythm in rapping, you ought to listen to “Is Gold”. This song has continuous rhythm and a thick bassline with powerful beats. His music is new and creative with room for instrumentation to work its magic. As an Artist, Corey Mc Monsta Mills is confident enough to draw fans to his songs and hook them thoroughly. The best part is his performance is maintained and consistent offering fans the chance to like his music.The track – “Is Gold” is brilliant and nostalgic in an unpredictable way. This hit single is from one of his new projects – “Stomping On Stars!” There is great story-telling and entertainment in the song with infectious rhythm and rhyme. Fans can easily get lost in the vibe which offers an attractive sound. Fans must listen to all his songs to comprehend in a better way about him. The best part of this song is the captivating lyrics and authentic beats. If you are interested, listen to “Is Gold” on Soundcloud. Also follow Corey Mc Monsta Mills on Facebook and watch his videos on YouTube.Visit here to enjoy the track "Is Gold":https://soundcloud.com/corey-mc-monsta-mills/is-gold-mc-monsta-beatzWe at Music Promotion Club have helped various artists, musicians, lyricists and many others with Soundcloud Promotion. To promote your music and get an entry into the esteemed music industry, soundcloud promotion is very effective. We manually do all the Promotions via our dedicated team and guarantee you to be able to show results after an week of promotion.Music Promotion Club India West Bengal Kolkata- 700040 5/10 A Netaji Nagar info@musicpromotion.club

12-06-2017 | Leisure, Entertainment, Miscel …
Music Promotion Club
Corey Mc Monsta Mills has Released New Appealing Music "Is Gold"
The rising singer Corey Mc Monsta Mills has created buzz with his new hip hop music blend. Hailing out from Union, New Jersey, this young singer is willing to set a new tone for hip hop music. This artist has started his journey long back in 2007. Corey Mc Monsta Mills is known as MC MONsta BEATZ is releasing some wonderful beats for gaining good notoriety. He is a chartbuster
11-28-2017 | Leisure, Entertainment, Miscel …
Music Promotion Club
Magical Feeling For Hip Hop Fusion With MC Monsta Beatz’s “Is Gold”
Hip hop is a genre of beats. The breathtaking beats of every hip hop track always induce the listeners to move with the numbers. But not only beats, it has the speciality of spreading deep rooted messages to the society with the meaningful, explicit and straightforward lyrics. The rappers, generally, write their own songs and put music into those, as the artists know what they want to communicate better than
04-08-2016 | Arts & Culture
Image Unlimted Communications
Pauli’s in Boston’s North End Celebrates Red Sox Home Opener with Specialty …
WHAT: Based on the argument that a sandwich is anything between two pieces of bread, Paul Barker, the sandwich king of Boston who holds one of the highest Yelp! ratings in the city, will be celebrating the Red Sox home opener by featuring one of America’s favorite foods the hot dog! On April 11th, 2016 Pauli’s in Boston’s North
02-25-2008 | Sports
NYSWF Pro Wrestling
Sam Roberts from The Opie & Anthony Show to serve as “special guest judge” f …
On Saturday, April 5, the world will be in “Prime Time” Sam Roberts’ hands as he will serve as a special guest judge for the Boxer vs. Wrestler match pitting professional wrestler Larry Sweeney against boxer Larry Barnes (44-3-0, 17 Knockout’s) Sam Roberts of The Opie & Anthony Show on XM Radio and The Than & Sam Show (www.thanandsam.com) will certainly make an impact on the New York State Wrestling Federation
01-05-2007 | Arts & Culture
HIp Hop Producer Black Panther
Hip Hop Producer Black Panther Releases Anticipated Sophomore Album “My Eterna …
January 5, 2007 - New York, NY---Brooklyn's own Black Panther made his mark as a hip hop producer with his 2003 debut release “The Darkest Night Ever” on the label Third Earth. Blessed with lyrics by some of the best underground emcees including Jean Grae, stic man of dead prez, Pumpkinhead and C-rayz Walz this concept album received acclaimed reviews from the hip hop world with allhiphop.com stating, “Soon you'll
Comments about openPR
OpenPR is clearly structured and remains true to its principle of confining itself to the essential parts. OpenPR has proven to be a very good and reliable partner to our media agency: Within the shortest time the releases are online and go down well with the media representatives. The success of OpenPR is reflected in the steadily increasing number of press releases. It is good that OpenPR exists!
Ursula Koslik, Director Marketing & PR, F+W Hamburg