The AGON saga: From the first battle cry to the next game plan 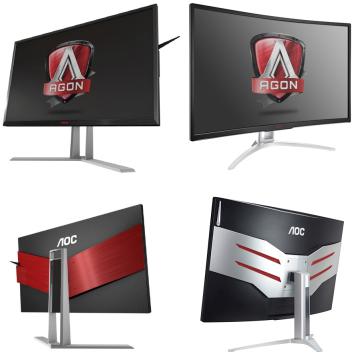 AOC has a suitable AGON model for every gamer

Amsterdam, 29 November 2017 – A leading brand in the gaming monitor market, AOC first launched its premium gaming monitor series AGON in 2016. Since then a good year and a half has passed, and the AGON monitors have been going from strength to strength. Not only have these screens proven to be bestsellers, they also have struck a chord with reviewers across Europe, repeatedly winning awards and “best gaming monitor” titles. And there is more to come: At the recent gamescom 17 in Cologne, AOC announced upcoming members to the AGON family - the AGON³ series with ultra-fast response times of just 0.5 ms as well as brand-new technologies such as HDR. AGON AGON, derived from ancient Greek, stands for competition, clashes and antagonism. A daring name to set battle ground for this monitor series particularly aimed at gamers. The AGON series has earned the love and admiration of casual and competitive gamers alike, thanks to its premium features, innovative technologies and attractive pricing. With display options ranging widely from 24″ to 35″, flat or curved displays and high refresh rates, the AGON monitors have conquered space on many gamers’ desks, regardless of their GPU choice.AGON - Opening Moves AOC first announced its premium gaming monitor series AGON in March 2016, debuting with the AG271QX. This future-proof 27″ model has a fast TN panel at 1440p resolution for extra details, a 144 Hz refresh rate, a 1 ms response time, and FreeSync support to ensure a smooth, fluid gameplay without any stutter or tearing. While the AG271QX quickly racked up awards, its similarly specced cousins with G-SYNC and in 24” size hit the shelves later in 2016. Then in January 2017, the model that competitive FPS players had been waiting for arrived - the AOC AG251FZ. Using the fastest panel in the market, it has a 240 Hz refresh rate, eliminating motion blur to deliver the smoothest movement in fast-paced games, with minimal input lag. The AG251FZ has been the choice of many e-sports gamers, including Team Liquid, and set the bar for competitive gaming monitors and countless times taking the stage at e-sports events. With FreeSync support, 1 ms response time and a TN panel at Full HD resolution, the AG251FZ delivers the competitive edge desired when in combat. And after its raging success, in August 2017 AOC also launched a G-SYNC variant - the AG251FG.Ahead of the curve Since the winter of 2016, we have enjoyed virtual worlds brought ever closer to reality, with the curved ultra-wide AGON models - AG352UCG and AG352QCX. With their 35” and curvature radius of 2000 mm, they are sure to keep us entertained. Their VA panels boast a 21:9 aspect ratio, 2000:1 contrast and G-SYNC or FreeSync for no stuttering or tearing. Later, the curved models line-up was expanded with familiar 16:9 ratio models- AG322QCX (32” at 1440p resolution) and AG272FCX (27” at 1080p resolution). These stylish monitors with a 3-sided frameless design boast an even smaller curvature radius of 1800mm, ensuring true immersion and stutter-free gameplay thanks to FreeSync support.All AGON models come with adjustable ergonomic stands, different game modes, stereo speakers, Shadow Control and Low Input Lag modes, Flicker-Free and Low Blue Light technologies to reduce eye-strain and fatigue.With 11 models so far and many more upcoming innovations in the future, AOC has truly established itself as one of the top names in the gaming sector. To date, more than 480 reviews of AGON monitors were published across Europe.Taking e-sports further AGON displays have been in the line of duty at over 80 top tier e-sports events, including DreamHack, the Intel Extreme Masters, Dotapit, and Insomnia. They are used by professionals and fans alike across the full spectrum of e-sports disciplines - be it fast-paced MOBAs and FPS titles, racing simulations, or fighting games - enabling nothing less than the best performance by giving gamers the edge in competitive titles.Future manoeuvres During gamescom 2017, AOC announced its newest AGON³ monitors with ultra-high resolutions, 144 Hz or more refresh rates and HDR (High Dynamic Range) support, in addition to monitors with an ultra-fast response time of just 0.5 ms. HDR allows exceptional brightness and delivers colours with great contrast. The fastest monitors with 0.5 ms response time let gamers keep their momentum where fractions of a millisecond matter, allowing them not to miss any details which could hamper their success.As one of the lightning fast models with just 0.5 ms response time, the AG273QCX will be equipped with a 27” curved TN panel at 144 Hz, boasting a QHD (1440p) resolution and AMD’s FreeSync2 with HDR. With a wide colour gamut support, it will have one of the best colour reproductions in TN panels. Its G-SYNC equipped brother, the AG273QCG has similar specs, lacking HDR but in turn boasting higher refresh rate at 165 Hz and G-SYNC support instead of FreeSync2 with HDR.With these upcoming AGON³ models, launching in 2018, AOC once again lives up to its premise of bringing the latest innovative technologies to gamers, eliminating external factors that held gamers back and letting true talent shine.http://eu.aoc.com/en/gamingAbout AOC AOC is one of the global top brands in the display market. High quality, first-rate service, attractive designs as well as environmentally friendly, ergonomic and innovative products at competitive prices are the reasons why more and more consumers, corporate decision-makers and distribution partners trust in AOC. AOC offers displays which cater to every type of user, be it for professional, home, entertainment or gaming use. AOC is a subsidiary of TPV Technology Limited, the world’s largest LCD manufacturer. www.aoc-europe.comunited communications GmbH Rotherstr. 19 10245 Berlin Elena Strzelczyk Tel.: +49 30 789076 – 0 E-Mail: AOC@united.deorAOC International (Europe) B.V. Prins Bernhardplein 200, 6th floor 1097 JB Amsterdam Anna Stefańczyk Tel: +31 205046950 Email: anna.stefanczyk@tpv-tech.com

You can edit or delete your press release The AGON saga: From the first battle cry to the next game plan here

03-29-2019 | IT, New Media & Software
AOC International (Europe) B.V.
AOC’s AGON AG272FCX6 connects players to the game with 165 Hz refresh rate and …
Amsterdam, 29 March 2019 – Display specialist AOC announces the AOC AGON AG272FCX6, an upgrade to its 68.6 cm (27”) curved Full HD gaming monitor AG272FCX. The newer AG272FCX6 has been revamped with a 165 Hz refresh rate instead of the 144 Hz of its predecessor and comes with a more affordable price tag. Gamers won’t have to compromise between a responsive display and a panel with exceptional image quality,
02-21-2018 | IT, New Media & Software
AOC International (Europe) B.V.
AOC to Show Off New AGON Curved Monitor at IEM Katowice 2018
Amsterdam, 21 February 2018 – At this year’s Intel Extreme Masters in Katowice, display specialist AOC will show off the most competitive gaming display line-up to ever attend an esports event. With over 100,000 event attendees to be expected, AOC engages with gamers and showcases their all-black, special edition curved AG352UCG6 model before Europe’s most passionate esports audience. With season 11 underway, Katowice will once again host esports fans on 24-25
05-24-2017 | IT, New Media & Software
AOC International (Europe) B.V.
Smoothness redefined: AOC presents 240Hz AGON G-SYNC monitor
Amsterdam, 24 May 2017 – AOC presents its fastest NVIDIA G-SYNC enabled gaming monitor yet. The AOC AGON AG251FG boasts a refresh rate of 240Hz, a 1ms response time and NVIDIA ULMB for reduced motion blur. In addition to the high responsiveness provided by NVIDIA G-SYNC, the display comes with other premium gaming features such as AOC Shadow Control and the ergonomic AOC Ergo Dial Base. Maximum smoothness for NVIDIA users The
03-03-2017 | IT, New Media & Software
AOC International (Europe) B.V.
AOC AGON 240 Hz gaming monitor now available
Amsterdam, 3 March 2017 – AOC’s fastest AGON gaming monitor yet is now available in stores. The AOC AGON AG251FZ boasts a refresh rate of 240 Hz, 1 ms response time and Adaptive-Sync, ensuring super smooth gameplay without motion blur, screen tearing or stuttering. Premium features such as the AOC Ergo Dial Base and the AOC QuickSwitch controller offer an added level of comfort to competitive gamers. Smoothness to the max With
02-21-2017 | IT, New Media & Software
AOC International (Europe) B.V.
Style meets substance: Two new AOC AGON gaming monitors with “frameless” des …
Amsterdam, 21 February 2017 – Display specialist AOC expands its AGON premium gaming monitor series with two new curved models: the 31.5″ AG322QCX with QHD resolution and the 27″ Full HD display AG272FCX. Both come with an extremely small curvature radius of 1800 for an added level of immersion. Thanks to almost invisible bezels on the top and sides of the monitors, the “3-sides frameless” design lets players focus
01-20-2017 | IT, New Media & Software
AOC International (Europe) B.V.
Immersion redefined: AOC AGON UltraWide Curved gaming monitor with NVIDIA G-SYNC
Amsterdam, 20 January 2017. The AOC AGON AG352UCG is the most immersive display in AOC’s AGON premium gaming monitor series yet. With an extra-small curvature radius of 2000 mm, it puts gamers right into the centre of the action. NVIDIA G-SYNC technology ensures a super-smooth and responsive gaming experience by minimising screen tearing, display stuttering and input lag. And the UltraWide QHD resolution of 3440 x 1440 pixels brings game
Comments about openPR
Your portal is fast, simple, and easy to use. Others may have more functions but they also demand more editing time, you have to preformat the text in order to achieve a good result etc. I think openPR is really fantastic!
Andreas Knepper, wallmedien AG