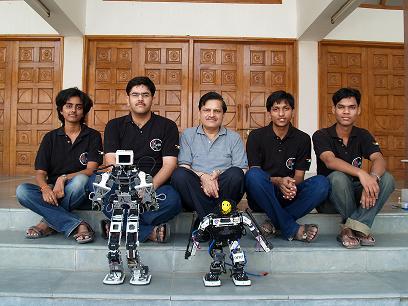 The first humanoid from India spear headed by Birla Institute of Technology and Science - BITS Pilani which is one among the top ranking universities in India today and its passion packed alumni across the globe had made its presence and impact at Robogames 2008 and thus marked India’s entry into the Humanoid Race.Robotics is becoming the new lifestyle sport of the thinking age. RoboGames USA as per Wired Magazine is "North America's Top Ten Best Geek Fests" and as per ESPN Sports Center is "SportCenter Top Ten". David Calkins who had worked with all types of robot competitions, realized the need for cross-pollination between events, as too many robot builders over-specialized within their own field. In 2004, David founded the RoboGames http://www.RoboGames.net as RoboOlympics to bring together builders from combat robotics (mechanical engineering) along with soccer robotics (computer programming), sumo robotics (sensors), androids (motion control), and art robots (aesthetics) to exchange ideas and learn more. As much as the very best athletes compete in Olympics, the very best robots compete in Robogames which as per Guinness Book of World Records is "World's Largest Robot competition" By offering gold, silver and bronze medals, and inviting the best robot builders from countries other than just the US, RoboGames has given everyone a chance to excel and compete on a level playing field. Like the human Olympics, this event allows anyone to compete, not discriminating by race, nationality, age, education, gender, or even carbon-base...The sixth edition of RoboGames is scheduled from Friday-Sunday, June 12-14, 2009 at Fort Mason Festival Pavilion, San Francisco California. The participating countries include Australia, Austria, Brazil, Canada, Colombia, Egypt, Hong Kong, India, Indonesia, Iran, Japan, Mexico, Peru, Russia, South Korea, UK, and the United States.This year acYut in various avtars (incarnations) will be there. If you thought acYut did a Dhoom dance in 2008, http://www.youtube.com/watch?v=peSNFTE0OYA, this year acYut will tell you why Pappu Can't Dance also http://www.youtube.com/watch?v=HuLjtOJL4Ng. Samay Kohli, Sushma Vallabhaneni, Mohammad Ariz and Akash Gupta students from BITS Pilani accompanied by Prof RK Mittal Deputy Director from the same Institute have set sail for the Robogames Gold quest. Passion packed BITS alumni who are undoubtedly the torch bearers for Brand BITS Pilani across the globe have supported the acYut mission in a big way to prove that for BITSians there are no dreams too large, no innovation unimaginable and no frontiers beyond reach.About BITS Pilani: Birla Institute of Technology and Science (BITS) Pilani Rajasthan which has the reputation of pioneering the online examinations for admissions through the path breaking BITSAT and setting a bench mark in industry university collaborations is one among the top ranking universities towering above the rest in various best college surveys in India today. BITS offers degrees in various disciplines presently at Pilani, Dubai, Goa and Hyderabad campuses apart from an array of work integrated learning programmes for HRD of a vast spectrum of Indian corporates. The alumni of the Institute who are who is who in various professions and Proud to be BITSians peaking with Passion Quotient for Alma mater are spread across the globe from New Zealand to America.Dr BR Natarajan Professor & Vice President BITS Alumni Association BITS Pilani Rajsthan 333031 India Email: brnt@bits-pilani.ac.in Website: http://www.bits-pilani.ac.in

10-13-2009 | Science & Education
BITS Pilani Rajasthan
Freshmen orientation at BITS Pilani Rajasthan - The Change is for Real
It is indeed a matter of pride that for the year 2009 the Birla Institute of Technology and Science - BITS Pilani has been ranked among the top ranking universities along with IITs in various Magazine surveys such as India Today, Outlook, LiveMint etc. BITS offers degrees in various disciplines presently at Pilani, Dubai, Goa and Hyderabad campuses. BITS is well known for its transparency in selection criteria based on
02-23-2009 | Science & Education
BITS Pilani Rajasthan
ICARA 2009 BITS Pilani Prof RK Mittal Keynote Address on Nanorobots
The 4th International Conference on Autonomous Robots and Agents – ICARA 2009 organized by the School of Engineering and Advanced Technology (SEAT), Massey University New Zealand took place at James Cook Hotel Grand Chancellor, Wellington during 10-12 February 2009. ICARA 2009 aimed to provide a common forum for researchers, scientists, engineers and practitioners throughout the world to present their latest research findings, ideas, developments and applications in the area of
Comments about openPR
9 o'clock: discuss press release with client, 10 o'clock: submit release to openPR, within the briefest possible time release is published and displayed in a prominent place on openPR.de. I am thrilled!
Zehra Spindler, Calypso Now! - Communication Agency