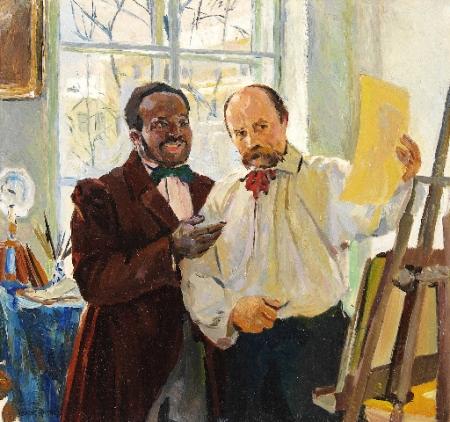 Munich, 11 June 2009, (kk) - The Louis Picard painting “Ira Aldridge in Taras Shevchenko’s Studio” is bound to cause a sensation. Painted around 1900, the portrait will go under the hammer at the Ketterer Kunst Old Masters and Art of the 19th Century auction as the spectacular prelude to the four Welcome Auctions to be held on 19 and 20 June 2009 at Ketterer Kunst in Munich. There was no hint that celebrities might be concerned when the Louis Picard paint was consigned under its original title “Künstler und Sammler im Atelier” [“Artist and Collector in a Studio”]. Thorough research conducted by Ketterer Kunst has identified the persons portrayed as the Ukrainian national poet Taras Shevchenko, who was critical of the Tsarist regime, and the internationally renowned African-American actor Ira Aldridge, who emigrated to England, where he played numerous Shakespearean leading roles, including Othello. The work carries an estimate of € 8000-12 000. “I am really delighted that, with our research, we have been able to contribute in a small way to ensuring that the significance to cultural history of this valuable work is recognised,” thus Robert Ketterer, auctioneer and owner of Ketterer Kunst.Pre-sale viewing: 11-18 June, Ketterer Kunst, Joseph-Wild-Strasse 18, Munich Auction dates: 19 June – Old Masters and Art of the 19th Century (Lot 329: Louis Picard), followed by Modern Art 20 June – special auction Bauhaus jointly with Quittenbaum, followed by Post War/Contemporary Art at Ketterer Kunst, Joseph-Wild-Str. 18, Munich-MesseSince it was founded in 1954, Ketterer Kunst has been firmly established in the front ranks of auction houses dealing in art and rare books with headquarters in Munich and a branch in Hamburg. Gallery rooms in Berlin as well as representatives in Heidelberg, Krefeld and Ravensburg have contributed substantially to the success. Ketterer Kunst has further rounded off its portfolio by acquiring the prestigious Ernest Rathenau Verlag, New York/Munich. In addition, exhibitions, special themed auctions and benefit auctions for charity as well as online auctions are regular events at Ketterer Kunst.For press enquiries:Michaela Derra M.A. Telefon: +49-(0)89-55244-152 (Fax: -177) E-Mail: m.derra@kettererkunst.de For client enquiries:Ketterer Kunst Joseph-Wild-Str. 18 81829 München GERMANY Tel. +49-(0)55244-444 Fax.: +49-(0)55244-177 E-mail: infomuenchen@kettererkunst.de