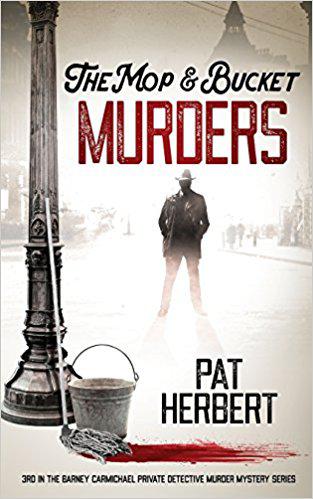 ISBN #978-1944156534The Mop & Bucket Murders by Pat Herbert3rd novel in the Barney Carmichael British detective murder-mystery series is publishedAbout the Book:The year is 1961. Barney Carmichael is about to take on his toughest case yet when a mysterious and glamorous woman walks into his office unannounced. Her request is simple: find her son. It is soon clear that the task is far from simple, however. In fact, the more Barney and brother Jim delve into the mystery, the more confusing it becomes. Meanwhile, Barney’s friend, Inspector Tony Halliday of Scotland Yard, seeks his help in solving a series of baffling murders. Charwomen at a big London office block are being picked off, seemingly at random, by an unknown assailant. The Carmichael Private Investigation agency has also taken on a bright new secretary, but when she is determined to do some investigating of her own, she makes a devastating discovery that changes her life forever. This is the third in the Barney Carmichael Private Investigator series.“The Mop & Bucket Murders” by Pat Herbert is available in paperback from Amazon at:https://www.amazon.co.uk/Bucket-Murders-Barney-Carmichael-mystery/dp/1944156534and this book can be downloaded in e-book format from:https://www.amazon.co.uk/Mop-Bucket-Murders-Pat-Herbert-ebook/dp/B0777PPHDC About the AuthorPat Herbert lives in London, England and works as an administrator and receptionist at a private health clinic. She worked previously as PA to the Managing Director of Thomson Books before they were taken over by Penguin. Pat has written fourteen murder-mysteries to date, including:Reverend Paltoquet Supernatural Mystery Series:The Bockhampton Road Murders Haunted Christmas The Possession of November Jones The Witches of Wandsworth So Long at the Fair The Man Who Was Death The Dark Side of the Mirror Sleeping with the Dead The Corpse Wore Red Seeing DoubleBarney Carmichael Murder-Mystery Series:Getting Away With Murder The Murder in Weeping LaneIn her novels, Pat likes to include all the hallmarks of a traditionally British murder-mystery series including quirky characters, dark deeds, humorous misunderstandings, and at times, a touch of the supernatural, and cosy cups of tea.Press/Media Contact Details:Darin Jewell (Pat Herbert’s Literary Agent) Managing Director The Inspira Group Literary Agency E-mail: darin@theinspiragroup.comNew Generation Publishing is a professional publishing house in the UK.107-111 Fleet Street London EC4A 2AB

08-04-2016 | Science & Education
OlsenMetrix
THERE'S BEEN A MURDER IN SPACE - NOW WHAT?
Space tourism could soon be a popular way for humanity to take a holiday but legal experts are concerned that criminality in outer space now needs some serious attention. Human spaceflight can vary in size of the crew and mission – in the next few years we could see anything from near-Earth orbit tourist flights to long-term missions to Mars. The engineering, technical and biological problems have been well
05-25-2016 | Politics, Law & Society
McIntyre Thanasides Bringgold Elliott Grimaldi & Guito, P.A.
The murder of Jason Westcott by Tampa Police Department
On May 27, 2014, Jason Westcott was gunned-down by members of the Tampa Police Department while they were executing a search warrant for marijuana based solely on the information from a confidential informant that was never properly vetted or supervised during previous alleged marijuana purchases. This confidential informant, Ronnie Coolge, was a paid informant for the Tampa Police Department with a very checkered history of violent crimes and severe drug
06-25-2012 | Arts & Culture
Bazillion Points
METALLICA's Orion Fest Presents Live Q&A With "Murder in the Front Row" Coauthor …
Upcoming this weekend (June 23 - June 24), Metallica's heralded Orion Music + More Festival will present Arctic Monkeys, Avenged Sevenfold, Modest Mouse, Roky Erickson, and dozens of emerging metal and rock bands, plus a full metal expo, including an hourlong Q&A with Murder in the Front Row: Shots from the Bay Area Thrash Metal Epicenter coauthor and photographer Brian Lew. As displayed in heavy archival detail in Murder in the
09-19-2011 | Leisure, Entertainment, Miscel …
Peter James
“Dead Like You” by Murder Mystery Author Peter James
The highly anticipated paperback of Dead Like You, the sixth novel in the Detective Superintendent Roy Grace Series by Peter James, is now available in the United States. The novel earned rave reviews and has achieved critical success across the U.K., reaching No.1 in the U.K. hardcover, beating James Patterson, in addition to going straight to No. 1 in paperback. U.S. audiences have eagerly awaited this installment in
01-12-2009 | Leisure, Entertainment, Miscel …
Silver*Ware Studios, Inc.
A Request for a Murder Mystery
An internet short film entitled, “Last Night” created by Producer/Director, Travis Ware, will be reshooting and extending his film into a feature length film for the big screen. The short was a murder mystery about a young black woman named Tausha, played by Tanzania Bauknight. She wakes up the next morning in a bed of blood with no memory of where the blood came from, who the
08-22-2008 | Advertising, Media Consulting, …
BrandOvation
Beijing Murder holds important Clues for 2010
At the preliminary FIFA World Cup™ draw held in November last year in Durban, FIFA general secretary Jerome Valcke stated that “it would be a disaster and a nightmare if something happened to someone during the 2010 FIFA World Cup™”. This nightmare became true for the organizers of the 2008 Olympics in Beijing, when an American tourist and his wife were attacked by a knife wielding suicide killer on the
Comments about openPR
OpenPR ist the nicest and most clearly laid out PR platform I have seen to this day. The press releases are displayed very nicely and clearly and without any unnecessary frills. The updates are fast and the finished release looks appealing and is clearly legible. Even with 16 years of experience one discovers new things from time to time. Congratulations!
Gabriele Ketterl, Director Marketing & PR, Menads