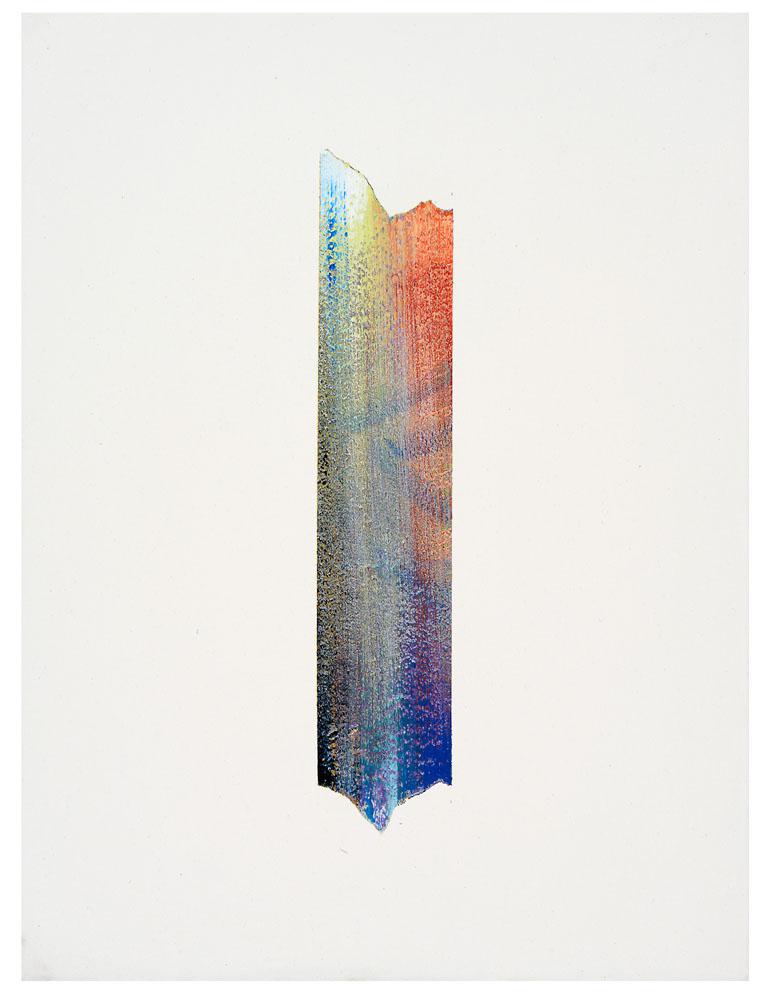 GALERIE SUPPER, Baden-Baden is pleased to announce its first solo presentation of works by Tino Geiss (*1978, Jena).An exhibition, set up like a tracking of traces. Two recent groups of works engage in dialogue, completing and contradicting each other. Colorful interiors are reminiscent of painting's emancipation from the authority of illusionistic dipiction. Dynamic tension, abstracted perspektives, and overdrawn or inverted colors refer to multiple art historian ancestors like the Fauves, the Expressionists, and the Cubists. But Tino Geiss goes one step further by not only putting in question formal criteria, but also materiality. He creates his interiors, bouquets, and everyday objects by means of masking tape, which bears traces of paint. Usually constructed as living or working spaces, Geiss' rooms seem enlivened while being devoid of people. The invisble human presence is only indicated by its traces; shifted chairs, tables, piles of paper, a white canvas.On the other hand: a small selection form the series "Stripes". Proudly, they float before white backgrounds. Being a collector, Geiss keeps and archives single strips of his colored masking tape in order to translate a few of them into the medium of painting.In his "Grammatology", the French philosopher Jacques Derrida questions the fact whether a trace is actually produced by an origin, or if the idea of the origin rather comes into mind through the existence of the trace in the first place. The way Tino Geiss confuses materialities, points out how illusion and abstraction constitute each other rather than being competitors. The question of origin and temporailty of the process gives way to an ever circling asthetic of the trace. Tino Geiss (b.1978, Jena) lives and works in Leipzig. He studied painting at the Academy of Visual Arts in Leipzig and at the Royal Academy of Arts in London before he graduated as Meisterschüler of Neo Rauch. His work has been presented in numerous solo and group shows. He was awarded an artist residency at the German Academy Rome at Casa Baldi, Italy in 2012. Showroom: Christian Awe, Candida Höfer, Rayk Goetze, Christian Herzig, Andreas Lau, Mike MacKeldey, Hide Nasu, Thomas Ruff, Monika Thiele, Patricia Thoma, Martin Wühler.Opening: Saturday, 9 December 2017, 6 - 9 pm Duration: 10 December 2017 - 4 March 2018 Opening Hours: Wed - Fre noon - 6 pm; Sat - Sun noon - 4 pmThe GALERIE Supper is specialized in contemporary art. Founded in 2002 it opened in Baden-Baden in 2012 with its current profile. The gallery promotes young, emerging artists with an unique signature. It is the intention to correlate them with renowned artists. Their positions should complement and stimulate each other, whereas every artist keeps his own characteristics.GALERIE SUPPER Kreuzstraße 3 76530 Baden-Baden GERMANYPress Contact: Dirk Supper Phone : +49 - 72 21 - 37 30 450 Fax: +49 - 72 21 - 37 30 451 E-mail: presse@galerie-supper.de

You can edit or delete your press release Tino Geiss: SPUR here

06-17-2019 | Arts & Culture
GALERIE Supper
Sebastian Wehrle and Friends
GALERIE SUPPER is pleased to announce our first presentation of selected works by Sebastian Wehrle alongside internationally renowned photographers such as Cindy Sherman, Peter Lindbergh or Hiroshi Sugimoto within the framework of the upcoming exhibition Sebastian Wehrle and Friends. The exhibition will focus on photographic strategies of staging. The portrayal of the self and others has gained relevance within the realm of social networks in the past years. However, the staged
02-07-2019 | Arts & Culture
GALERIE Supper
GALERIE SUPPER at art KARLSRUHE
GALERIE SUPPER ist pleased to announce its participation in art KARLSRUHE 2019, one of Germany's biggest art fairs. Within the context of international exhibitors with a focus on modern and contemporary art, we will present well known als well as new positions from the program of the gallery. Next to the impressive thread paintings by Monika Thiele (b. 1966, Erfurt), and Tino Geiss' (b. 1978, Jena) multilayered tape works, most different
01-11-2019 | Arts & Culture
GALERIE Supper
Opening I Andreas Lau: S CH ICHT
GALERIE SUPPER is pleased to announce S CH ICHT, an extensive insight into the artistic development of Andreas Lau (b. 1964, Karlsruhe). The solo show presents selected works from different stages of Lau’s past work. “Vielschichtigkeit” is a German term which implies complexity as well as a multi-layered structure. Methodologically, is has been highly relevant for Lau’s artistic work for more than 25 years now. In the beginning, his paintings resembled
11-19-2018 | Arts & Culture
GALERIE Supper
Opening: Intakt im Takt
With "Intakt im Takt" ("Intact on Time") GALERIE SUPPER presents a diverse group show. Based on the programme of the gallery, it additionally presents internationally renown positions. The composition of a painting, a drawing or a collage is - as the term already implies - never limited to its material dimension. Different temporal levels play a major role within the creation as well as within the reception of an art