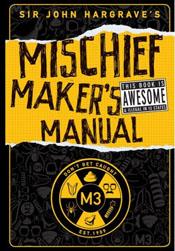 June 3, 2009, Boston, MA – A viral marketing video designed to promote MISCHIEF MAKER’S MANUAL, the new book of pranks and practical jokes for children ages 8-12, landed some of those same kids in hot water when their school was shut down for the day. On June 2, fifth-grader Troy Hughes of Lansing, MI forwarded the video to every member of his 5th grade class, sparking a panic that resulted in school closure.The prank video, located at www.mischiefmakersmanual.com, was designed to look like a fake news segment, cleverly inserting the victim’s name and photo into a local newscast about a massive prank that had shut down the local school. When received via e-mail, the video was customized to look like it had come from a local TV station.Although the video ended with a clear message that “you’ve been pranked,” that wasn’t enough for some kids—and their parents, who took the message literally. Showing the increasing power of students and parents to self-organize, an e-mail went out to an all-school mailing list maintained by the Parent’s Association, declaring that school was cancelled. School administrators, away at a staff retreat, did not find out about the message until late Monday morning—but by then it was too late. “It is important to point out that the message did not originate from the school,” said School Administrator Hugh Rank. “The teachers were waiting in their classrooms, on time and ready to teach.”The Parent’s Association was quick to shift blame to the school. “The internal mailing list was created in response to the poor communication coming from the school district,” said PTA President Jade Myers. “This is a classic case of garbage in, garbage out.”For their part, the makers of the video were amused. “It’s a tremendous prank,” said John Hargrave, the author of MISCHIEF MAKER’S MANUAL. “And everyone learned something about trusting what you read online. Which is one thing more than they would have learned at school that day.”The prank does call into question, however, the ethics of confusing real news with fake news, at a time when the integrity of “real news” is being called into question by outrageous political and comedy shows that blur the line between journalism and satire. “It’s a dangerous game they’re playing,” claims media communications professor Joseph King. “It breaks down our trust in authority, and even confuses our own self-identity: ‘Am I real?’”Such concerns are not stopping the spread of the viral video, however, which has been downloaded “hundreds of thousands of times,” according to the creators. But given their track record, you might think twice before passing that number on to a friend.The video is located at: http://www.mischiefmakersmanual.comABOUT MISCHIEF MAKER’S MANUAL The definitive guide to pranks and practical jokes, MISCHIEF MAKER’S MANUAL is the ultimate reference for aspiring young troublemakers. It will be released in bookstores across America on June 11, 2009.Media Shower, Inc. 800 Boylston Street Box 990586 Boston, MA 02199

06-02-2009 | Politics, Law & Society
Media Shower, Inc.
Baratunde Thurston's JackandJillPolitics.com honored at Living Liberally Annual …
May 28, 2009, Boston, MA – JackandJillPolitics.com, the rising black political blog, will be honored at the Living Liberally Annual Celebration in New York, which takes place on May 30th, 2009 at the DCTV Firehouse on 87 Lafayette between 7:00 pm and 11:00 pm and is hosted by Air America's Sam Seder. Described as “a black bourgeoisie perspective on U.S. politics,” Jack & Jill Politics has contributed to the national political

03-25-2021 | Arts & Culture
BookBuzz.net
Author Valerie Anne Hudson Promotes Her Middle Grade Fantasy: The Mariposa Myste …
Author Valerie Anne Hudson Promotes Her Middle Grade Fantasy: The Mariposa Mysteries Trilogy Author Valerie Anne Hudson is pleased to announce the release of her new middle grade fantasy, ‘Mariposa Mysteries Trilogy.’ Set in the fictional town of Mariposa in Central Ontario, Canada, these unique stories offer mystery, magic and mayhem, with exciting twists and turns lurking around every corner. The trilogy follows the adventures of a group of
10-30-2020 | Leisure, Entertainment, Miscel …
Style of Business
The Tennessee Werewolves Get Disorderly in "American Dream" Video - Premiering O …
New music video shows the band's wild onscreen transformation in most defiant way Houston, TX - October 29, 2020 -- Filmed right in the middle of the infamous Mojave Desert, Verado Entertainment is thrilled to announce the new release of The Tennessee Werewolves much-anticipated video, "American Dream.” Filmed and directed by Vicente Cordero, the uncensored video makes its debut in the US on Music-News.com Friday, October 30th - MISCHIEF NIGHT! The
10-19-2017 | Tourism, Cars, Traffic
Royal Cliff Hotels Group
Invitation to the Best Family Halloween Party at Royal Cliff, Pattaya on 4 Novem …
Pattaya, Thailand - Don’t miss this chance to join one of the most anticipated celebrations in Pattaya each year! Royal Cliff Hotels Group is once again hosting the popular family-friendly vampire-themed Halloween party on Saturday, 4 November 2017 from 6:30 - 9: 00 p.m. at Breezeo- Be Yourself Dining! Experience your own haunted adventures as this stylish beachfront restaurant. The venue will be vibrantly decked out in the spirit
10-04-2017 | Leisure, Entertainment, Miscel …
Sterling Media
THE GOLMAAL GANG IS BACK WITH NO LOGIC BUT MAGIC WITH “GOLMAAL AGAIN”!
The wait is finally over! The Golmaal gang are back with a bang with the Rohit Shetty directorial Golmaal Again, ready to spook fans across the world this 20th October! Presented by Reliance Entertainment in association with Mangl Murti Films and Rohit Shetty Picturez, Golmaal Again is Produced and Directed by action film supremo Rohit Shetty who has also conceived the story. Golmaal Again sees the return of the ensemble super-star
10-11-2016 | Arts & Culture
Dreaming Big Publications
New Release! “Service Goat” from bestselling author Piers Anthony with Dream …
Bestselling author of the “Xanth” series Piers Anthony continues his legacy of humorous and fantastical fun with his newest book “Service Goat.” About the Book: Orphaned and blind seven-year-old Callie has a service animal – a goat with extraordinary powers. Ben Hemoth is a down-on-his luck news reporter facing prison. Needing to save his job and his reputation, he teams up with Venus, a young seductress caught up with a teenage drug gang.
07-25-2011 | Associations & Organizations
Offender Solutions Inc.
Offender Solutions® Inc. Releases New Underage Drinking/Minor in Possession of …
Offender Solutions® Inc. Releases New Underage Drinking/Minor in Possession of Alcohol program. Offender Solutions® Inc. is a nationwide leader in providing evidence based courses to both Juvenile and Adult Offenders. Offender Solutions® has recently released a their latest program which is designed for youth engaged in underage consumption of alcohol or those charged with minor in possession of alcohol. Offender Solutions® programs are appropriate for those that have
Comments about openPR
OpenPR is clearly structured and remains true to its principle of confining itself to the essential parts. OpenPR has proven to be a very good and reliable partner to our media agency: Within the shortest time the releases are online and go down well with the media representatives. The success of OpenPR is reflected in the steadily increasing number of press releases. It is good that OpenPR exists!
Ursula Koslik, Director Marketing & PR, F+W Hamburg