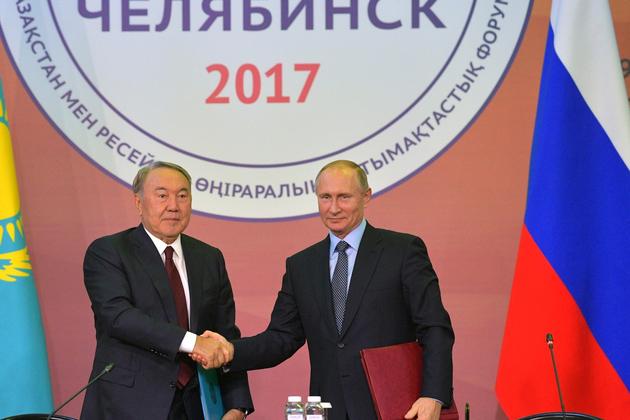 During the XIV Interregional Cooperation Forum in Chelyabinsk Vladimir Putin and Nursultan Nazarbayev discussed the issues of bilateral collaboration in the sphere of education and science The main subject of the Forum was the development of human capital. One of the most important topics discussed during the large-scale event was the collaboration between Russian and Kazakh universities in the sphere of research. Vladimir Putin came forward with a proposal of establishing joint Russian-Kazakh research centers on the basis of the leading higher educational institutions of two regions. As an example the President cited the collaborative development of Ural Federal University with the partners from Kazakhstan in the sphere of reducing the energy intensity of production. He underlined that its large-scale implementation will allow not only to conserve energy resources, but as well to reduce greenhouse gas emissions, which is of significant importance for a number of regions both in Kazakhstan and in Russia. The President noted that Russia and Kazakhstan agreed to extend relations between regional universities and added that education is a key sphere of the human capital development. Another important initiative discussed by the Presidents of two countries was the organization of joint Olympiads for school students of Russia and Kazakhstan in Mathematics, Physics, Chemistry and Biology. This proposal was put forward by Nursultan Nazarbayev in the course of his opening speech at the Forum. This initiative might open up new opportunities for the development of academic collaboration between two countries. Today 928 students from Kazakhstan study at Ural Federal University. Based on the materials by www.kremlin.ruUral Federal University (UrFU) is one of the largest higher educational institutions in Russia, which brings together fundamental education and innovative approach towards the challenges of modern times.Currently, the university is home to 32,000 students from 76 countries of the world and more than 4,000 faculty members, including the top-notch global experts in the spheres of natural sciences, engineering and social sciences. Our institutes offer about 400 Bachelor, Master and Doctoral Programs in natural sciences, engineering, social sciences, humanities, economics and management taught in Russian and English. The number of UrFU alumni exceeds 360,000 people.Breakthrough studies are pursued in 72 research excellence centers. The university is open to international collaboration having almost 400 partners all over the globe and being an active participant of such initiatives as BRICS Network University, SCO Network University, CIS University.Ural Federal University 19, Mira str., Ekaterinburg, Russia, 620002 +7 343 374 54 34 http://www.urfu.ru/en info.international@urfu.ru Ms. Marina Sannikova, Head of International Marketing Office

06-11-2018 | Science & Education
Ural Federal University
Russian Scientists Build Multiscale Models of Arctic Ice
A team of scientists from the Institute of Natural Sciences and Mathematics, Ural Federal University, Russia, including Piotr Galenko (head of the project), Ilya Starodumov, Irina Nizovtseva, Dmitry Aleksandrov, Aleksey Malygin and others is conducting a multiscale mathematical modelling of the Arctic ice evolution and determining its influence on the climate change. In 2016, the mathematicians received a grant from the Russian Science Foundation for fundamental research. The idea of
06-01-2018 | Science & Education
Ural Federal University
Young Russian Researcher Creates Unique Biomechanical Hand
Fyodor Kotorov, a young researcher at Ural Federal University, Ekaterinburg, Russia, developed a prototype of biomechanical fingers capable of lifting heavy items. The prototype has already passed primary tests with a canister of water. “The idea of designing a mechanical hand came to me when I was watching a series of videos on biomedical engineering achievements, both Russian and international”, said Fyodor in his interview for Oblastnaya Gazeta. “When
04-18-2018 | Science & Education
Ural Federal University
Glycine crystals can replace piezoelectric ceramics in biology and medicine
Crystals of glycine under a deformation can produce an electric charge considerably larger than conventional ceramics or a polymer. The scientists of Ural Federal University in collaboration with researchers from Limerick University (Ireland) and University of Aveiro (Portugal) measured piezoelectric coefficients in beta-glycine crystals for the first time and found that their values are comparable with the coefficients in barium titanate or lead zirconate titanate used in the manufacture of
01-29-2018 | Energy & Environment
Ural Federal University
Russian Scientists Make Electric-Hydrodynamic Heater More Efficient and Environm …
Scientists from Ural Federal University and Karaganda State Technical University simulated the work of an electric-hydrodynamic heater (EHDH) and proposed a method for its improvement. The resulting installation, which dimensions range from 0.8×1×1 m to 1.5×2×2.5 m, can be used in autonomous heating, hot water and air conditioning systems. The installation is environmentally friendly and easy to maintain; it allows consumers to set their own mode of operation. The results