Rise of the American Assassins 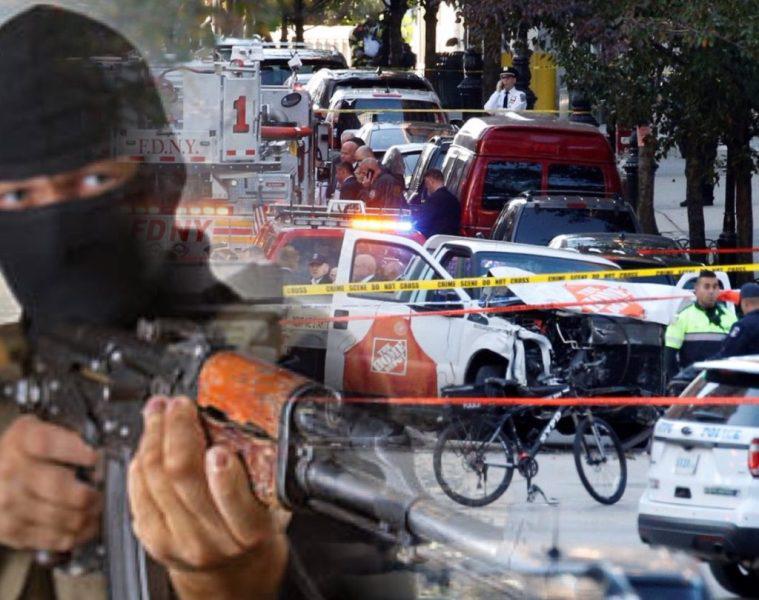 Mass Shootings in America are on the Rise

"The earth also was corrupt before God, and the earth was filled with violence." Genesis 6:11.Welcome to the Rampage Republic. We live in an age that can be defined as a period of violent, uncontrollable behavior. More and more tragedies are erupting as these reckless, destructive episodes of murder continue. The cycle of violence is boiling over in America. Peace, liberty and the pursuit of happiness is being critically undermined as our society tries to make sense of the most recent, senseless act of terror - and there are many to choose from.1. At least eight people are dead and more than a dozen injured after a terrorist mowed down people with a truck in a busy New York City park. https://www.washingtonpost.com/amphtml/news/post-nation/wp/2017/10/31/nypd-says-one-person-in-custody-after-reported-incident-in-manhattan/2. A crazed man in Denver walked into a Walmart and started shooting people. Three people were fatally shot as customers ran for their lives. http://abcnews.go.com/amp/US/wireStory/neighbors-alleged-walmart-shooter-angry-rude-509033523. The recent Las Vegas shooting killed 59 people and wounded another 527 as a man used high powerful rifles that were modified with automatic fire. This tragedy was planned during a music concert in order to maximize the casualties. http://abc7news.com/amp/at-least-59-dead-527-injured-in-vegas-shooting/2479985/There are no safe places anymore. We are not safe in the cities nor in the country settings. We are not safe in the schools, churches, malls, theaters, parks, concerts, clubs, restaurants or workplaces. In all of these locations there have been violent acts of terror and mass shootings. This kind of wickedness is the ruin of human society."That this is a rebellious people, lying children, children that will not hear the law of the LORD." Isaiah 30:9.Hollywood is helping to perpetuate the savagery by glorifying violence in the theaters. Television is also filled with killings and shootings. Violent video games are training people and children in the arts of assassination. Our generation has become desensitized to violence as we are constantly being flooded with aggressive behavior by the entertainment industry.We have created a society that is based on violence and mental illness. Everyone is suffering. We are fulfilling the very same description found in the book of Genesis 6:11. The earth back then was filled with violence, death and injustice towards men. Today, this same culture of violence is alive."The earth also is defiled under the inhabitants thereof; because they have transgressed the laws, changed the ordinance, broken the everlasting covenant." Isaiah 24:4, 5.We have failed to identify that there is a direct correlation between the increase in violence and the loss of values, the disregard of the sanctity of life, the lack of parenting and the degradation of morality."I have not troubled Israel; but thou, and thy father’s house, in that ye have forsaken the commandments of the Lord" 1 Kings 18:18.The perpetrators of these heinous acts have no conscience or fear of God. We are contending with brute beasts and demon-filled murderers who have no regard or respect for life. The plague of violence that fills the earth is one that should not exists. We have been given the remedy to stop all of this insanity. Sadly, those who are removing God and His moral law from society are sowing seeds for a terrible harvest of death and destruction:"Those who teach the people to regard lightly the commandments of God sow disobedience to reap disobedience. Let the restraint imposed by the divine law be wholly cast aside, and human laws would soon be disregarded...Life itself would not be respected" (Great Controversy, p. 585).Our civilized world has turned into den of assassins. Peace and happiness is forfeited when men and women disregard the moral restraints of God's word."Lawlessness, dissipation, and corruption are sweeping in upon us like an overwhelming tide...The infatuation of vice, the wanton taking of life, the terrible increase of intemperance and iniquity of every order and degree, should arouse all who fear God, to inquire what can be done to stay the tide of evil" (Great Controversy, p. 585).When the principles of truth, righteousness and justice are set aside, the door is opened for the prince of darkness to do his work. When God's law and gospel are rejected there is nothing left to stay the workings of radicalism, extremism, hate, violence and terrorism.About: Advent Messenger provides news and commentary on current events, top stories, social trends and political and religious events. For more news visit www.adventmessenger.orgContact: Andy Roman, Publisher Address: Advent Messenger, PO Box 96, Dover, OK 73734 Phone: (888) 299-2119 Website: www.adventmessenger.org Email: info@adventmessenger.org

09-30-2022 | Leisure, Entertainment, Miscel …
Advent Messenger
Truth-filled Literature Containing the Three Angels' Messages is Being Blamed on …
LegnanoNews, a Northern Italian news outlet that serves Legano and Milan, published an article titled "Anonymous Manifestos of Religious Fanaticism Invade the Oltresempione in Legnano" on August 21, 2022. Images of the pamphlets distributed and placed in mailboxes at numerous condominiums in Legano, Italy, were included in the story. The literature included Bible verses demonstrating how God's word requires the Sabbath to be observed on Saturday, the seventh day of the
09-30-2022 | Leisure, Entertainment, Miscel …
Advent Messenger
The Adventist Church in Italy and HopeMedia Italy Celebrate the Vatican-inspired …
HopeMedia Italy is the official communication agency for the Italian Union of Seventh-day Adventist Churches. According to an article published on September 14, 2022 by HopeMedia Italy titled "Season of Creation in Cesena," Roman Catholics, Romanian Greek-Catholics, Ukrainian Greek-Catholics, Romanian Orthodox, and Seventh-day Adventists celebrated a "ecumenical event" on the theme "Listen to the Voice of Creation." This celebration was held in response to the global call by Pope Francis,
09-07-2022 | Leisure, Entertainment, Miscel …
Advent Messenger
During a $100 Million Hospital Merger, Kerry Heimrich, President and CEO of Adve …
On August 11, 2022, Mid-Columbia Medical Center (MCMC) located in Oregon and Adventist Health announced the intent for MCMC to join Adventist Health. As part of this agreement, Adventist Health, a church-owned health care system operating in California, Oregon, Washington, and Hawaii, will pay $100 million to MCMC. Kerry Heimrich, the new President and CEO of Adventist Health and the former CEO of Adventist-owned Loma Linda University Medical Center, Children's
09-07-2022 | Advertising, Media Consulting, …
Advent Messenger
AdventHealth will Sponsor an All-Star Football Game that is Scheduled to be Play …
AdventHealth has officially agreed to be the "Title Sponsor" of the Cure All-Star Football Game, which will feature the greatest high school football players from Lake and Osceola Counties in Florida. The all-star game is set to take place on Friday night, December 9, 2022. How can we teach people about the sanctity of the Sabbath when we sign up to sponsor football games that violate its sacred hours? How

09-07-2022 | Associations & Organizations
Grace and Goodness of God Evangelical Ministry
Expect Only Good From God
Kelechi John Nlemadim Answers Mind-boggling Questions in This Book About The Goodness of God. Author and Minister, Evangelist Kelechi John, releases a new book titled "Expect Only Good From God - Secrets To Overcoming Ugly Situations," where he explores the goodness of God and why you should expect to receive ONLY GOOD from Him. Released in MARIETTA, GA, August 16th, 2022: This book which has been described as an inspirational treasure authored
03-07-2022 | Leisure, Entertainment, Miscel …
RodneyBondBooks
Science + God + Humanity
Everything You Need to Know About the Bible. This book presents scientific and archaeological evidence supporting the biblical historical account. Acknowledging commonly cited issues with the biblical narrative, logical arguments are made that point to the general truth of the Bible. This book addresses relationships between scientific discoveries and humanity's search for meaning. The initial discussion covers how some scientific theories have affected humanity's perspective. A foundational topic, Gödel's incompleteness theorems, is
09-11-2017 | Politics, Law & Society
Advent Messenger
Trump’s National Day of Prayer: Is God Listening?
President Donald Trump issued a proclamation this past Sunday to be the National Day of Prayer for Hurricane Harvey victims. He called upon all Americans and all houses of worship to unite in prayer to God for the nation and to assist those suffering from the consequences of the storm. Even though this is a welcome step in the right direction that we acknowledge God and the significance of prayer, it
09-13-2016 | Associations & Organizations
A Work of Hope
EVANGELIST PASTOR JOHN COLLINS WALKS FOR GOD BECAUSE "GOD MATTERS"
Wheatland, Wyoming: Evangelist Pastor John Collins, head pastor of Love That Cross Ministries, is recognized as one of the 15 most influential pastors living in the United States today by Inspirational Faith Magazine. His faith is unwavering and inspirational. His preaching is spiritual and moving. His style is vibrant and animated. He is a fresh and honest example for evangelism, revival, and renewal that is sweeping the
03-01-2013 | Arts & Culture
Jerry Pollock PhD
God And Science: Jerry Pollock PhD Explains Why Science Is, In Fact, The Search …
In Jerry Pollock’s view, God is the Master Scientist. However God operates on a different level of science because He has limitless powers that human scientists do not, indeed cannot understand. God is the unified theory of the universe that Einstein so desperately sought to find, even on his deathbed. “With God,” Pollock stated, “we are not just dealing with another human being. His powers and His intelligence are trillions of
01-24-2013 | Arts & Culture
Jerry Pollock PhD
God and Science: Author Jerry Pollock, PhD Proposes Science Does Not Does Exclud …
In a recent symposium in New York City, scientists who both believed and disbelieved in God discussed the problematic issue of science and religion. Opponents of a Supreme Being involved in creating our universe framed their arguments around their beliefs that centuries of scientifically proven biological experiments and theoretical physics and mathematics exclude God’s participation, while proponents took the opposite view where they felt that science cannot answer all the
Comments about openPR
OpenPR ist the nicest and most clearly laid out PR platform I have seen to this day. The press releases are displayed very nicely and clearly and without any unnecessary frills. The updates are fast and the finished release looks appealing and is clearly legible. Even with 16 years of experience one discovers new things from time to time. Congratulations!
Gabriele Ketterl, Director Marketing & PR, Menads